Newport to New London with a Northwest Wind

I am writing this from the Thames River in New London, Connecticut, on a mooring just a hundred yards or so from Amtrak’s Northeast Corridor rail line. I made it in from Newport a little before five yesterday afternoon after a wild ride over. 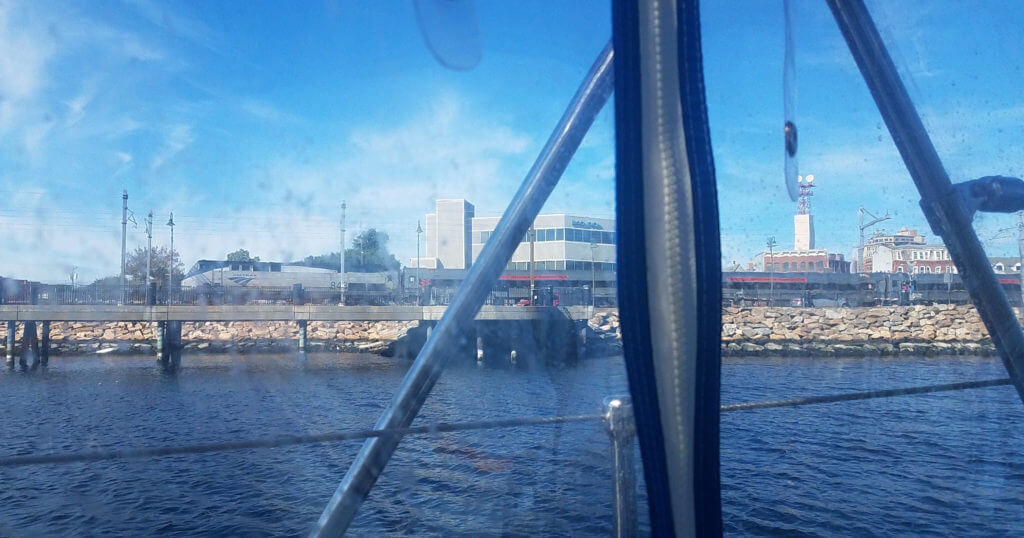 The Amtrak train going by in New London through the glass of our cockpit enclosure, salt-stained because of the rough trip over from Newport.

When I was planning the trip, I thought of it as having three different components: the stretch from Newport to Point Judith, Point Judith to the Watch Hill Passage, and then the Watch Hill Passage to New London. Actually, New London was my main destination, but I figured if things had been really bad, I could have returned to Newport or just ducked in at Stonington, just after coming past Watch Hill. And, on the flip-side, I figured if it was not too bad once I entered the Sound, I might head on through the night to Port Jeff, Oyster Bay, or even Manhasset. But I thought the three sections would serve as both markers of the trip and distinct parts of the sail over.

Looking at the weather, I expected the first stretch out of Newport to be the windiest and, based on the comments of the Newport Harbormaster, the section around Point Judith to be, possibly, the roughest. In reality, those first eleven miles into Block Island Sound proper were the smoothest and most fun part of the trip. In the lee of the land, there was little more than some wind chop and a small wraparound swell from the west, hitting us more head on, though not slamming the boat at all. I was under double-reefed main and staysail and having a sleigh-ride with the wind on the aft starboard quarter. As I got closer to the point, the wind died away a bit; I was not sure if this was part of the shift from 20-25 to 15-20 that was supposed to happen around that time or the fact that I was just getting closer to Point Judith and, therefore, more in the lee.

Rounding Point Judith, I started to take the WSW swell – presumably a bit of a carryover from the SW wind the day before, though I had thought it would have moved NW with the wind given the relatively short fetch across to Long Island. Though I was still getting some power from the staysail and main combination, I had to turn on the engine to really make headway. Motor-sailing and hand-steering, I was able to keep my speed in the high fives, occasionally riding out a lift for a few minutes above seven before getting headed and slowing down again. Then I started approaching Weekapaug Point. Though not much of a protuberance, the wind still seemed to funnel around the small cape, making things a bit sportier still. Though the wind slacked a little once I was finally past Weekapaug, both the wind and swell only increased again as I approached Watch Hill around 2pm. I thought I was smart timing my arrival in the hour before the current switched to flood, but I don’t think there was a good time to go through the passage – where all the water that is not bound for the Race from the massive Sound to the west is funneling through – yesterday. It was slow, it was heaving, and it seemed like I was never going to get out of the passage’s grip. 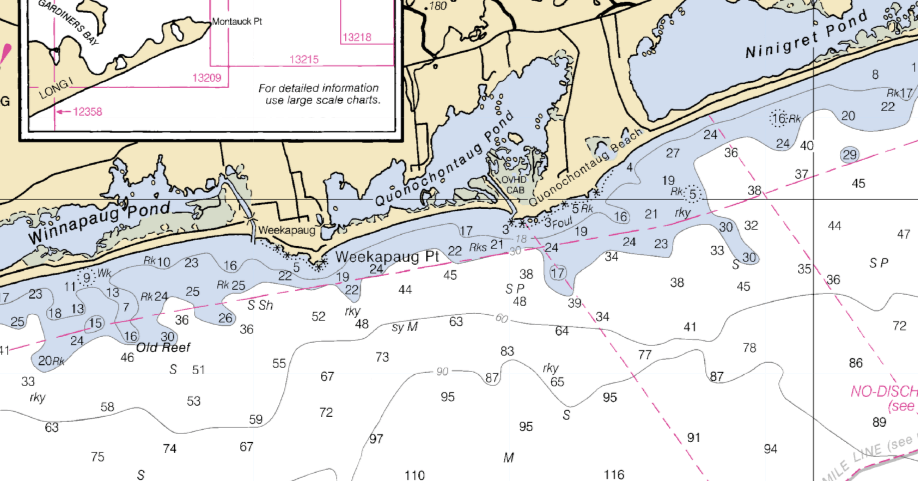 Once in Fishers Island Sound, I expected some calmer conditions. And maybe I would have had them had I timed the current differently. But rather than a calm protected body of water, there was a steep chop and, as the current quickly switched to flood, waves from both the bow and stern, at times combing over into each other. Water, not just spray, was flying over the boat. Though I was never really concerned, unlike I had been for a moment or two off the Sakonnet, it was not fun. And, with the current behind me, engine on, and occasional really drawing sails, my speed would vacillate between 2 and 7 knots, and quite abruptly at that when moving from the higher to the lower number. At Mystic, I worked farther north, out of the main flow, and came into some flatter, though still hectic, water. By the time I turned up to New London, the mouth of the river was flat save some wind ripples. 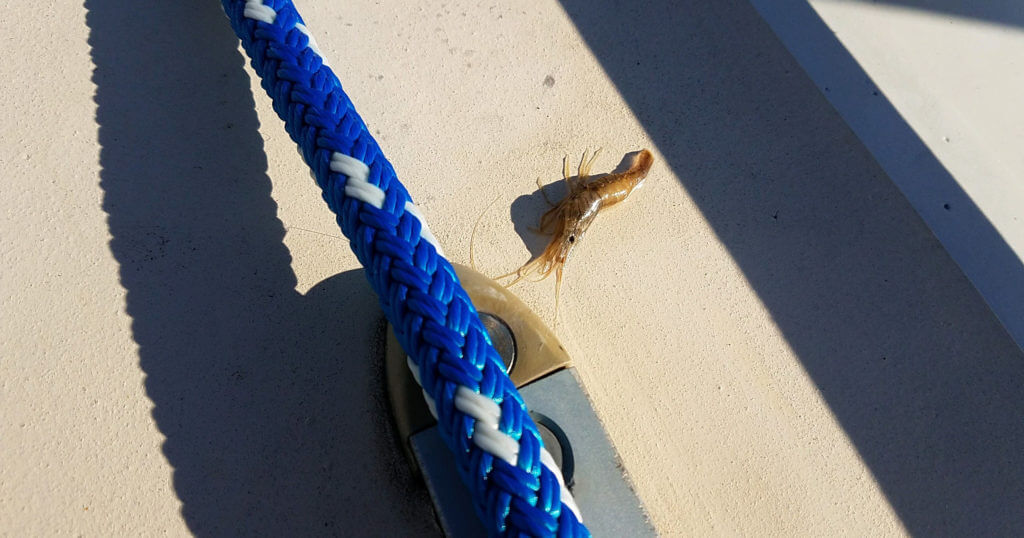 A grass shrimp that had been washed aboard somewhere in Fishers Island Sound. We should be getting flying fish on deck at this point in the season instead!

Upon arriving, I was worn out and demoralized. But it only took a few minutes of rest, a little food, and a bit of rum to have me celebrating the fact that I had gotten through another major bottleneck and was firmly in Long Island Sound. It did not hurt that the weather looks good for a run to Sandy Hook, if not Cape May starting Saturday night or that friends, who we met up in Rockport, Massachusetts, last week, emailed to say they were planning on making their way from Block over to New London Friday morning. And did I mention there are showers and laundry right here on shore? 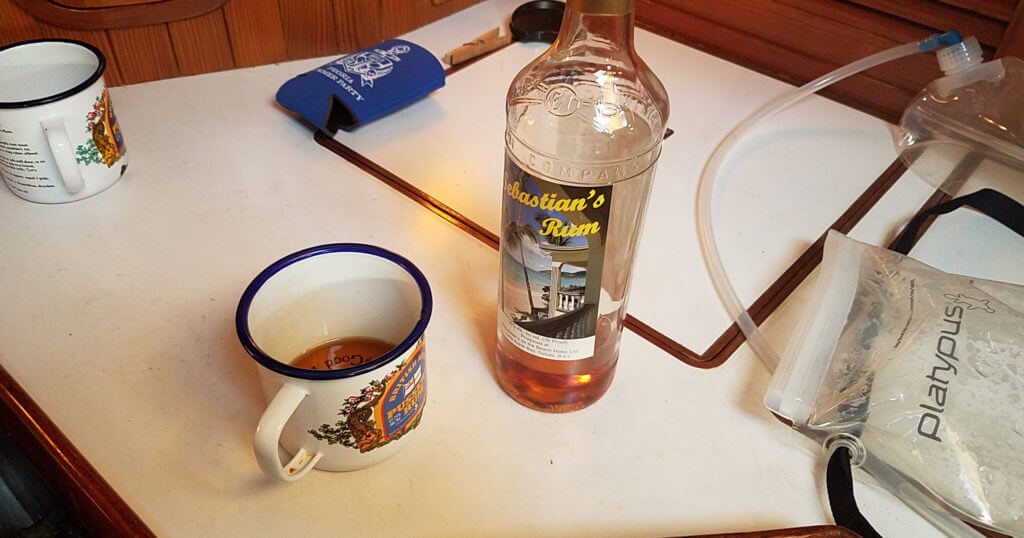 A little rum makes it all better. And Sebastian’s, from the BVI, reminds me of what awaits us down south!

4 Responses to Newport to New London with a Northwest Wind