Banged Up In Rhode Island Sound

Yesterday, while coming down Buzzards Bay, I spent some time looking at models for later in the week and over the weekend. It seemed like I could make a run down the Jersey coast if I could just get to the western part of the sound by Thursday. Knowing that really motivated me to put the miles in, because before that I had little reason to hurry west.

As I was checking the long-range weather, Buzzards Bay was a bit choppy with 12+ out of the west. With those sorts of conditions, I had been imagining that Rhode Island Sound would not be all that fun. But all I needed was a little incentive to get me to push through, and the possibility of getting to the Chesapeake by next weekend was more than enough.

As I came around the Hen and Chickens and Old Cock, the rocks marking the southeastern entrance to Buzzards, I set a course for the bell off the north side of Block Island. It was just under 30 miles, and the couple degree course change put me nearly into the wind. I had to furl the staysail, which had been powering us through the bay on a tight angle. But even with the headwind, we weren’t really slamming into the waves so much as being shook by them. And with our new engine and its break-in regimen, we were averaging about 6 knots. I figured I could stand 5 hours to Block. 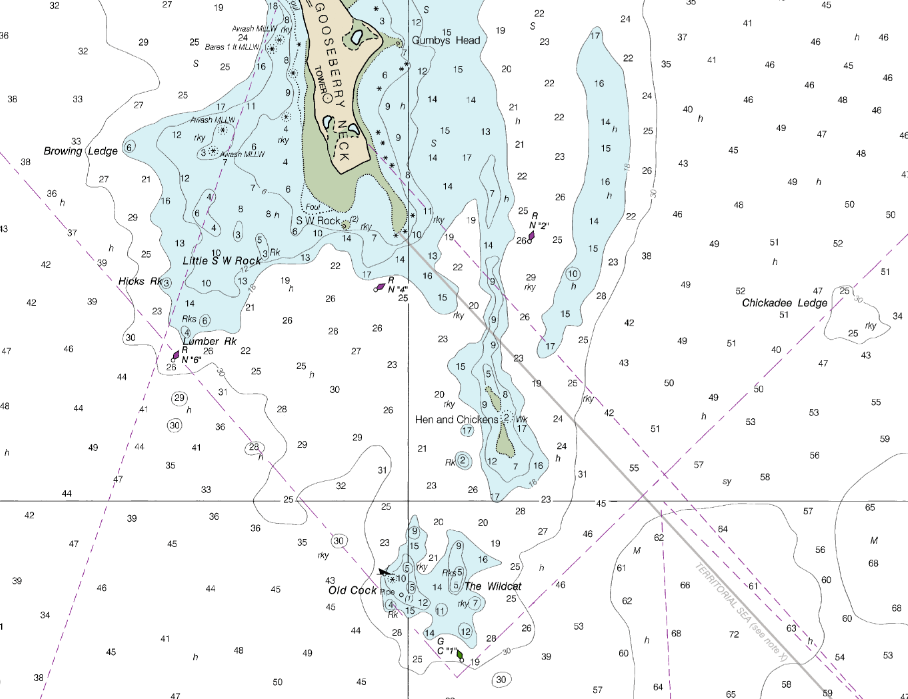 Hen and Chickens at the southeast entrance to Buzzards Bay

About an hour in, the wind picked up and a swell began to emerge. Before too long, we weren’t making more than about three knots, and we were crashing into waves, sending spray over the entire boat. Knowing Block was out of the question, I changed my waypoint to the bell off the southeast edge of the Sakonnet, and I was pleased to see that it was only about six miles.

With the new angle, I was able to put up the staysail. Bear was still throwing spray everywhere, but we were making in the high sixes and it was a fun ride hand steering. However, I needed to make about 295 to the bell, and I could only sail that heading a quarter of the time. But I kept sailing on, figuring I would just get closer to shore, then motor west for the half mile or so I was giving up by falling off. 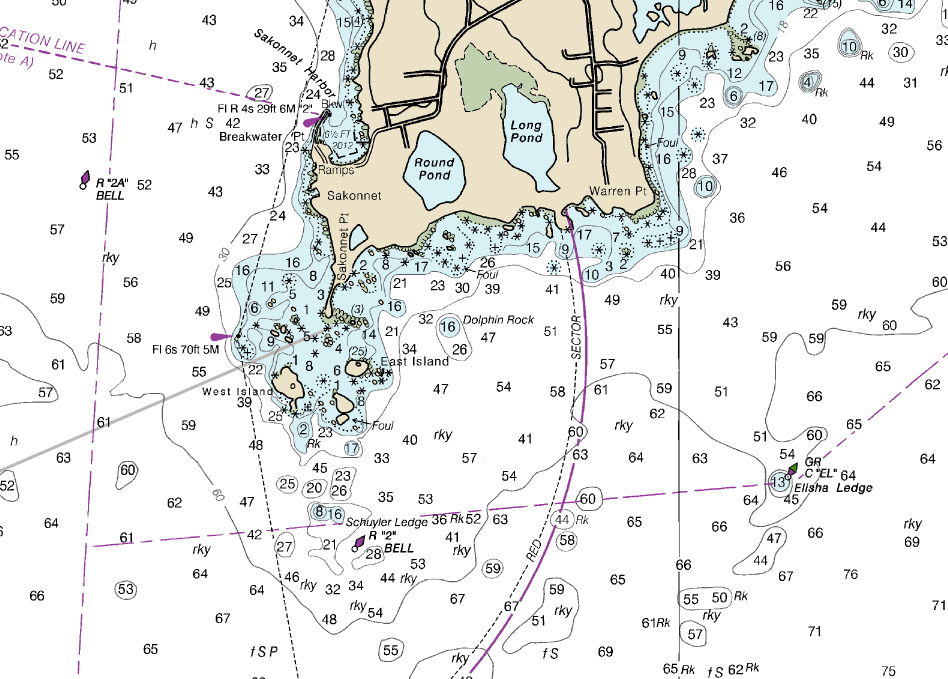 The southeast entrance to the Sakonnet. All the excitement took place just west of Elisha Ledge.

As I got close to shore, just east of the rocks that jet out from Sakonnet, I went to furl the staysail. Try as I might, I could not get the furling line to move from the cockpit. I ran forward in the spray and seas to check the drum and found it fine up there. But back in the cockpit I still couldn’t pull in the furling line. With the shore quickly approaching, I was in a spot of bother.

I tacked away to get myself some sea room. And then I sat for a moment thinking through my options. I came to the conclusions I could just sail up the Sakonnet and then bring down the staysail in calmer waters. But, before doing that, I gave the furling line one last try, and, with a little strength, I was able to pull it in. I’m still not sure what the problem was, but it might just have been that I was not giving myself enough slack on the sheet given the heavier wind. Regardless, I was relieved and made way to the Sakonnet.

Now I am sitting all the way up in the Kickamuit River for the 30 to 35 knots out of the southwest that is coming this afternoon and overnight, indeed just building now. I probably could have made some miles to the west this morning, but I am happy to be in this hurricane hole of a secure anchorage. And I will get some computer work done during the day as well as replace one of the staysail sheets that chafed through its cover during the excitement.

The fact that our staysail sheet was in such a condition to begin with is a subject for another post, but it is all fixed now.

Staying here is also a big step towards not pushing myself too hard on the boat or being too hard on myself when I don’t make constant forward progress, both of which I struggle with, especially given our plans to continue on to the Caribbean. The fun should be in the journey as well as the destination, and getting bashed around day in and day out is not all that fun. But I also must get south sooner rather than later (high of 48 and low of 34 on Thursday!). Tomorrow it looks like I can cover some ground to the west before the late afternoon, when the wind shifts onto the nose. I will let you know how it goes.

Please consider purchasing one of Margaret’s photographs at our print sale. All sales will go towards our cruising kitty!