Trying to get to the Chesapeake

First off, I should say that I am writing this while underway on my cell phone using voice to text. So there may be some grammatical errors and things; hopefully you can just overlooked them.

I dropped Margaret off at the dock this morning. She is headed to an artist residency in Quebec, but is first driving down to Annapolis to pick up her car. It’s pretty ironic that she is going to be in Annapolis later this afternoon and that’s where I’ll be trying to get to for the next week to 10 days or more.

I am currently heading south in Buzzards Bay. There’s about 12 knots of wind out of the west northwest. And the sun is out warming the cockpit.

I’m really not sure where I am going to this evening. One thought is to just head over to the Sakonnet. Then I would hang out in Narragansett Bay for a couple days because it doesn’t seem like I could head farther west in the Sound given the forecast. 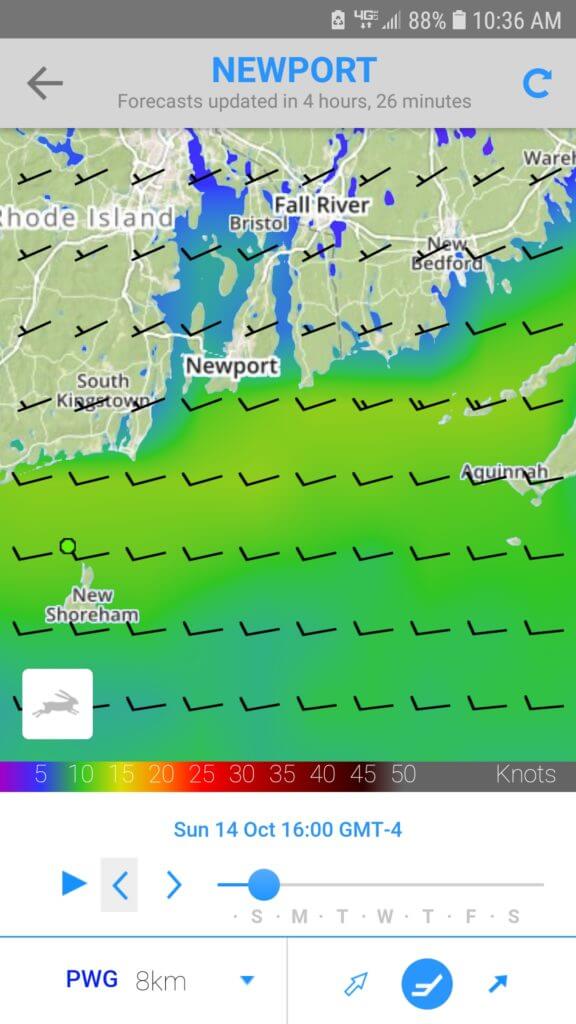 The best of the wind forecast for today…its a bit stronger most other times.

The next option is to slog to Block today. I say slog because most of the trip would be upwind in 10 to 15 knots out on Rhode Island Sound, which certainly doesn’t sound like it would be a fun trip or very easy. But doing that looks like it would allow me to go farther west in the Sound tomorrow on what should be a pretty strong southwest breeze. I am thinking that maybe Essex would be my destination on Monday.

The third option is probably the least likely. I would head out west and just continue on through the night. The current clay the Race changes around 10:45 or 11 tonight. So I could catch that and continue on for another 40 or 50 miles with the current behind me. Then maybe just continue on to Port Jeff or even Oyster Bay against the current for a couple more hours tomorrow morning. Of course the wind is not going to make that option pleasurable not to mention the temperature.

As you can probably guess, I am trying to get to Annapolis as quickly and easily as possible. An offshore trip from Block or Cuddy doesn’t seem doable in the foreseeable future. There’s a lot of 25+ out of the west on the ocean the next couple days, which isn’t the best direction or the most reassuring for me solo in these temps. So making some tracks to the west in the Sound sounds like the best option. That would have me looking for a 24 hour window and a better angle to get down the Jersey coast rather than essentially a 48-hour window from Block or Cutty going southwest. Basically, I am trying to make the best of a lot of bad options.

I’ll give an update tomorrow. But you can follow along by tracking Bear on AIS.

More posts on the engine re-power are coming soon, too. Please consider helping us restock the cruising kitty after that unfortunate event by checking out our print sale of a few of Margaret’s photographs.

2 Responses to Trying to get to the Chesapeake