After the catastrophic failure of our marine diesel engine – a phrase that mechanics we talked to used with regularity – we had no idea whether we would be able to get a re-power in time to go south for Margaret’s sabbatical as we planned. Not only were we unsure of whether we could afford to replace the engine, we had no idea how long a re-power would take.

The destruction of our engine happened on the Saturday of Labor Day weekend, so it was unlikely we were going to get answers until Tuesday, which was, at that point, three long days away. I did make some calls to friends in the area who gave us recommendations for mechanics and yards. Almost everyone in Rockland seemed to recommend Pat Ricci at Thomaston Boat Works, a Volvo dealer. On Sunday morning I gave him a call, just thinking I would be leaving a message. But Pat picked up and kindly spent fifteen minutes telling me what were going to be some of the obstacles in the installation – footprint, space, transmission and our prop, etc. – and priced out a new Volvo install for us. With some 17k for the engine, he thought the total would be around 21-22k. He also thought someone would be able to do the re-power in a matter of a few weeks, if we could just find someone who was not overly committed. But Pat was backed up with work until at least November. I was grateful for the information.


Tuesday morning, I went into Journey’s End Marina – a Yanmar dealer – in Rockland right as Doug Woodbury, the “Recreational Operations Manager” arrived for work. As I sat at his desk, he tried to be understanding and thoughtful about our predicament; asked me to write him an email to which he and his head mechanic, Isaac, would respond the following day when they had more time; indicated he thought they could get the work done in October; and dropped a ballpark figure of “from 30 to 40 thousand dollars.” Based on the recommendations we had for Journey’s End and the fact that they were just a mile from the boat, I would have been happy to go with them for a re-power until he let me know what the cost would be.

After leaving Journey’s End, I immediately got on the phone and started calling the three other places that we had received recommendations for: Robinhood, a Beta and Yanmar dealer; Belmont Boatworks, a Beta dealer; and Casco Bay Diesel, a Yanmar dealer, among others. Galen Gullatt, one of the mechanics and owners at Casco Bay, and Andy Werwaiss, the service manager at Robinhood, both indicated that they could do the work in a timely fashion. In fact, Andy wanted to get started as quickly as possible so they could complete the job before their haul season really got into full swing. For the next couple days, I went back and forth with both guys and learned the merits of a Beta 38 (not common rail and balanced four-cylinder) compared to a Yanmar 3JH40 (would drop right into the same footprint). They also quoted me their estimates of total costs: 14,381 for the Beta 38 and 40-65 hours at 80/hour at Robinhood and 16,170 for the Yanmar 3JH40 (the exact price Andy quoted for the same engine) and 30-40 hours at 110/hr with Casco Bay.

There was a lot to consider in both offers. Galen thought the install would go quickly because the 3JH40 was meant to be a direct, common rail replacement for our old 3JH4E. But I was concerned about the common rail, which involves a lot of computerized sensors to get the injection dialed in, and we were also worried that going with Casco Bay, who just works out of a shop, meant that we would also be at the mercy of another entity, the yard. But I had conversations with Port Harbor Marine, and they had quoted me a reasonable 580 dollars for haul, block, and re-launch and were only going to charge 15 dollars per day for us to be on the hard.

With Robinhood and the Beta, I was anxious about how easy the install would be and how many other costs might arise as we got into the process. My concerns started to blossom into full-blown fears as I found out that Beta’s custom feet-ordering program – a big selling point, because it would mean we could use our old mounts – actually needed a four month lead time. Where that left us with Andy’s promises of a quick install, I was not quite sure. Moreover, as I became a little more knowledgeable and started to ask more pointed questions about the costs of haul and storage while the work was being done, as well as whether we would need a new prop and/or shaft with the Beta and its new transmission, the competitive estimate from Robinhood started to look less accurate.

At the same time, I finally heard back from Journey’s End, who was now giving me about the same estimate as Casco Bay had and had the same minimal concerns about the compatibility of the new Yanmar with our old setup. They also made it clear that they could not start the work until the middle of October. That made me feel better about Galen’s quote and also made it clear that if we were going to go with the Yanmar, we would be doing it with Casco Bay so that we could get headed south faster.

Belmont Boatworks also got back to me during that week, coming in with a much higher estimate for the number of hours the install would take (120-140), though they did only charge 60 dollars an hour for that labor. They also had a lower price than Robinhood on the same Beta 38 engine, only 12,942. And they added a nebulous “parts” charge of 2,500 to the estimate. When I called the folks at Belmont to ask more about the estimate, they detailed all the things that might need to be changed for the Beta: shaft, prop, raw water intake, exhaust, place for the panel, etc., which comprised their guess at the cost of parts and explained some of the additional hours in the quote. And while they wanted to do the re-power and thought they could get it done in a timely fashion, they cautioned me that they thought making any promises about timeframe before they saw exactly what our current setup was and how the Beta would fit was just not possible. 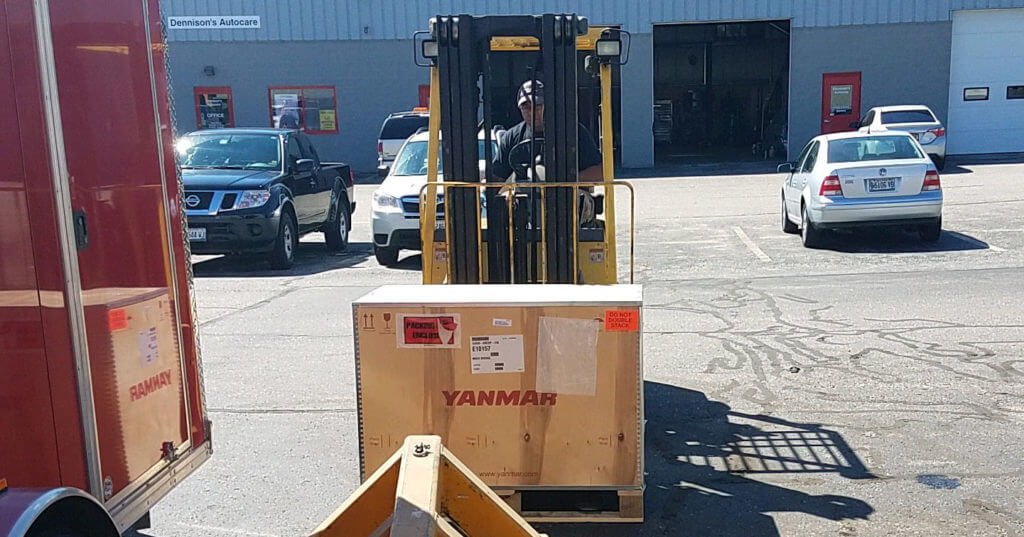 Our new Yanmar 3JH40 coming into the shop.

With all of that, it seemed clear to us that Casco Bay was our best bet if we wanted to get out of Maine before the winter and do so anywhere near the estimate. I did call Yanmar to see if there was any way to get a non-common rail equivalent to the 3JH40, which they still sell outside the US and Europe where there are not as stringent emissions regulations. It turns out one can apply to the EPA for an exemption, which are usually granted. But the process would take 3-4 months and another month or two for Yanmar to actually import the engine. And so, after the week-long lesson in diesel engine installations and the marine industry, we ordered the engine through Casco Bay, and I made preparations to sail from Rockland to Portland.

If you missed it, you can read the first post in our series on our re-power. And coming in a few days will be the next installment in our re-power series on, if you could not guess, the sail to Portland.

The whole experience of losing our engine and re-powering was painful, not least to our wallet. In order to restock the cruising kitty, we are having a print sale of a few of Margaret’s photographs. Please consider helping us out and purchasing a print or two.