As I write this, it is September 15th, which is my birthday. I am about three miles off Kennebunkport at the moment, heading for Isles of Shoals from Jewell Island up in Casco Bay. It is great to be out on the water on this day; there have not been too many birthdays that I have had that privilege. At the same time, I do wish that Hurricane Jose was not heading towards Cape Cod, because the storm is causing a little bit of anxiety and affecting my planning going forward. 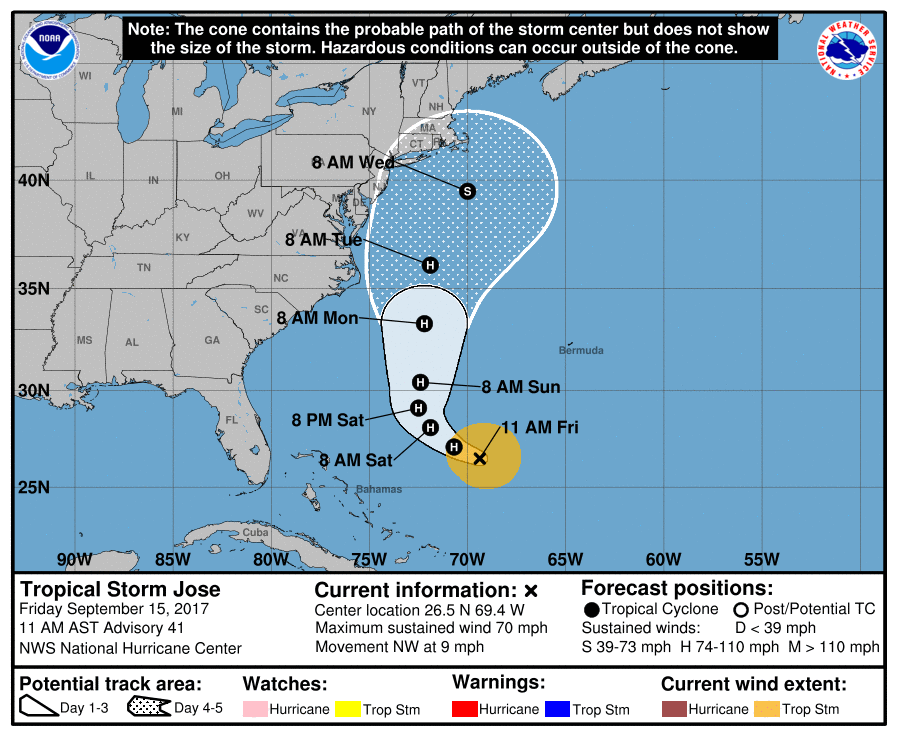 By the time I post this next week (we need a delay so that we don’t have my Mom absolutely freaking out), Hurricane Jose’s track will be more certain. But at the moment, the National Hurricane Center has the storm a couple hundred miles south of Cape Cod in the five-day forecast with the cone of uncertainty all the way west to New Jersey. The European and GFS models both suggest the storm will stay offshore, but, even with that, the Cape will see tropical storm force winds. In short, I don’t want to be anywhere near Cape Cod come next Tuesday.

Our plan at this point is to get through the Cape Cod Canal and then hightail it west through Long Island Sound. With the current track, holing up in the Kickamuit in northern Narragansett Bay would be our first acceptable place to be as Hurricane Jose rolls through. Ideally, I would be further west in Essex or Port Jefferson. And if I made it to either of those places by Tuesday, I probably would not even have to stop, but could continue making my way to the East River. I should say at this point that it was not my plan to go inside on the way south. I wanted to leave from Block and make the trip to Cape May that way, reversing our route from this spring, but Jose seems to have made that unlikely. 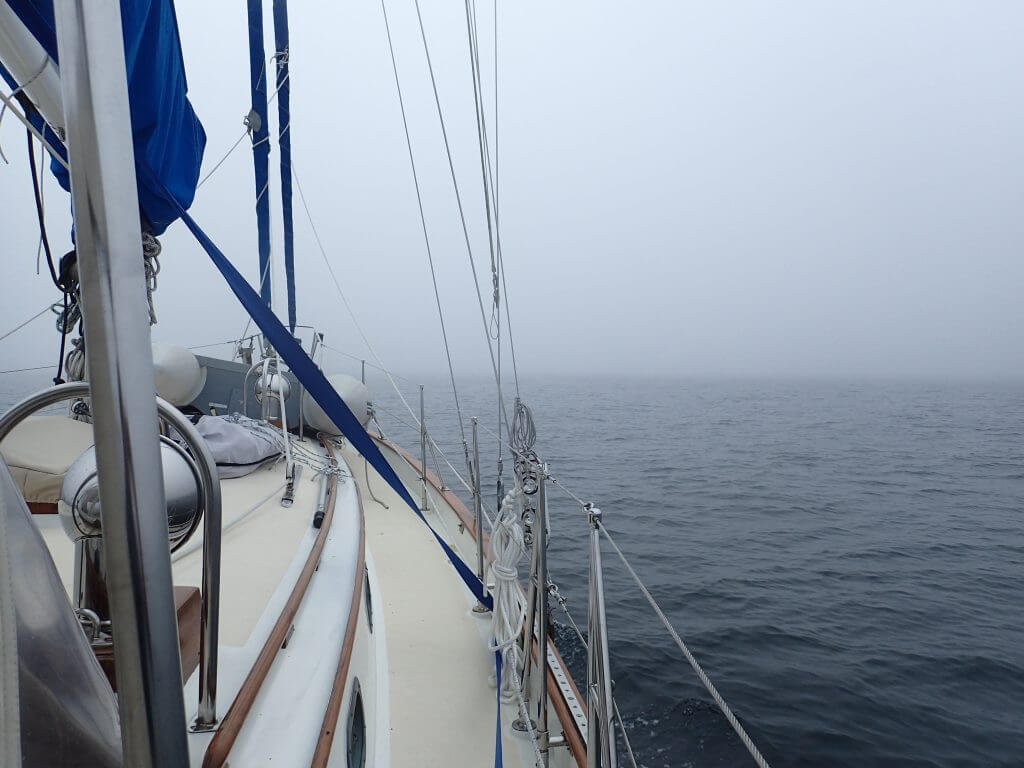 Now, you might be wondering why I am even stopping at Isles of Shoals this evening. My initial plan was to go overnight to Provincetown or even on, straight through the Cape Cod Canal tomorrow morning. But there is a forecast of dense fog tonight into tomorrow morning over the entire area. I was already a little nervous about doing my first overnight by myself, so the prospect of dense fog made me alter my plans. And, so, Isles of Shoals it is.

Only getting to Isles of Shoals tonight starts to really put the squeeze on us as we try to make it out of Hurricane Jose’s potential path. I even called Kittery Point Yacht Yard to see if I could get a mooring for the week to wait out all the action there. However, they need the moorings to stage and haul their own storage customers should the hurricane come this way. So, it looks like I will be heading out of Isles of Shoals tomorrow morning regardless of the fog situation. Where exactly I am going is an open question. I could head over to Provincetown, which is about 60 miles, but I think going further than a couple miles offshore is actually going to put me into more fog rather than less. Moreover, I just don’t really care for being anchored up in Provincetown; it is so exposed with nowhere to go. So, I might just head for the canal with the idea of getting there after about 7pm when the current will shift west, allowing me to transit it at night.

Again, by the time you read this, all of these issues will have been taken care of one way or another. Hopefully I will be comfortably heading west in the sound or, even, sitting at anchor in Salt Pond on Block waiting for the seas to calm as Jose passes hundreds of miles to the east. Until then, I will just enjoy my birthday and being out on the water. 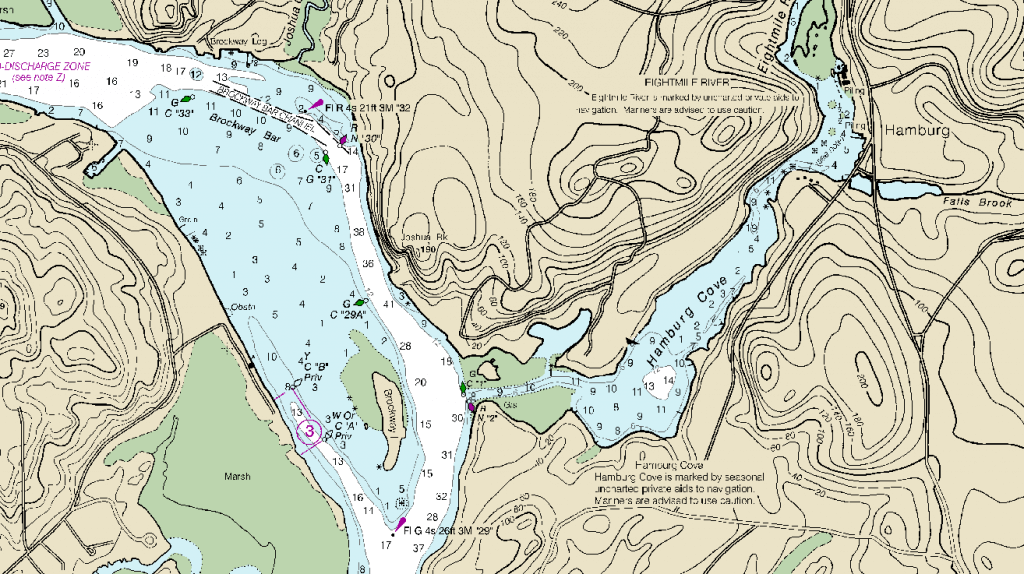 I am now sitting in Hamburg Cove just north of Essex waiting out Jose with about eight other cruisers (and maybe 30 unattended boats), including two German boats and two Canadian ones, friendly folks all around. I went from Isle of Shoals in pretty thick fog nearly the entire day and through the canal in the evening. I ended up anchoring just west of the island off Red Brook. The next morning I got up before sunrise and headed down Buzzards Bay in, once again, thick fog. By the time I got out in Rhode Island Sound, visibility had improved to 1-2 miles, and I headed on to Block. There, I got to pick up Bear’s old mooring. Thanks to the generosity of Bear’s former owners, we had a real easy in and out during that short stop. And I think that Bear thought it was pretty neat to be back home. Then I came over to Hamburg yesterday from Block, finally without fog.