Rock Hall to Newport – Part One

I picked up Kerry in Annapolis on May first. At the time, I was still anxious about both having Kerry aboard and departing. Despite all the work I had done on the boat, there were still quite a few jobs – almost none of which were really necessary for the trip – that were yet undone. But more importantly, the boat was still unclean and disheveled with tools everywhere. Moreover, the sails were not on and I had a few last minute errands still remaining. Given all that, I needlessly worried that Kerry would be disappointed or frustrated that I was not ready to leave. Of course, Kerry was very understanding and helped me get all the work completed, including hoisting me up the mast, the following day. Little did we know that it was to be our last warm day of the trip, which made the awesome Henri Lloyd foul weather jacket I picked up that day at Rock Hall Marine Consignment all that much more of an incredible find.

Kerry and Bear down below.

With the boat finally more or less in order, Kerry and I decided to depart in the evening of the second. Looking ahead, there was a slight window to get down the Delaware the following night. So, we wanted to make Chesapeake City by the next morning and get some rest so that we could drop the river on the favorable wind and tide. Once we left the dock, we had a fairly uneventful motor in 2-3 foot choppy waves and a strong, but diminishing wind out of the WNW. Making it all the more enjoyable, a classic Chesapeake sunset accompanied us north. Finally, nearing midnight, we decided to anchor up off Aberdeen Proving Ground near Old Woman’s Gut. We were pretty much in the middle of the bay, but did have some protection from the northwest, where we expected the wind to honk out of by morning. 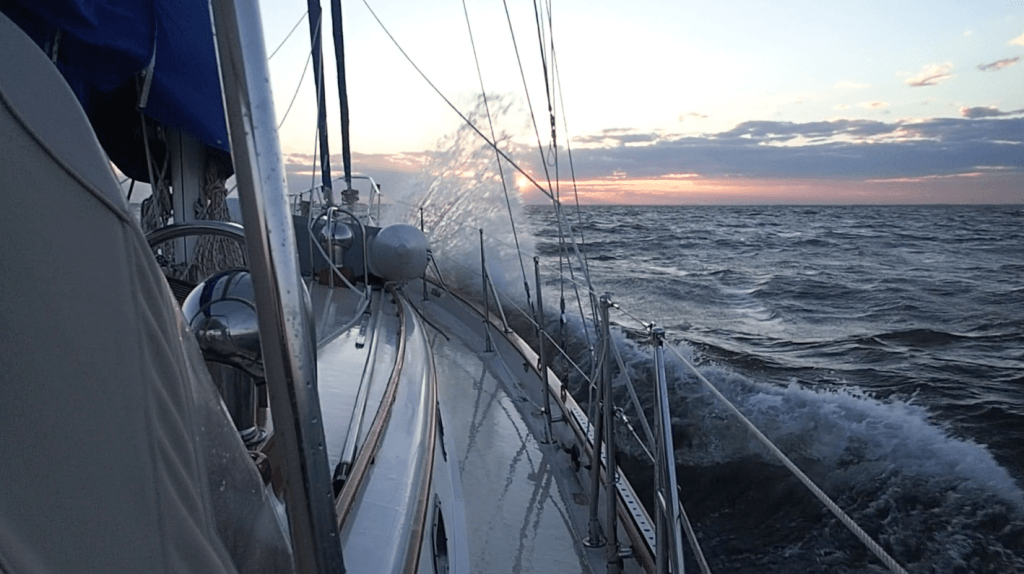 Heading north the first evening out of Rock Hall.

The wind started picking up about 4am, and the motion of the boat was rather rough, but not because of the fetch, but because the Chesapeake tide kept us at a ninety degree angle to the breeze, which was actually more west and even south of predicted. By six, we were both up and about. In what would become a pattern, we had a cup of hot caffeine – coffee for Kerry and green tea for me – before hauling anchor and heading out. On the trip north, we put up some sail and had a brisk run, which, minus the storm, was reminiscent of Margaret and my first day on the bay last year. Though Kerry hand-steered most of the way, the few times we put on the autopilot, it worked like a charm, which was a big relief given our issues with the system and our recent fix.

Once we got to the C&D, we furled the sails and headed towards Chesapeake City. The Army Corps of Engineers has still not dredged the the entrance to the basin – the harbormaster told me it should happen in August – so we were a bit nervous about negotiating the entrance about an hour before low tide (see our post from last year about shoaling here). With the new transducer telling us we were in under five feet of water – we draw 5’ 8” – and clearly pushing some mud aside, we made it in, discovering three other boats already in the anchorage. 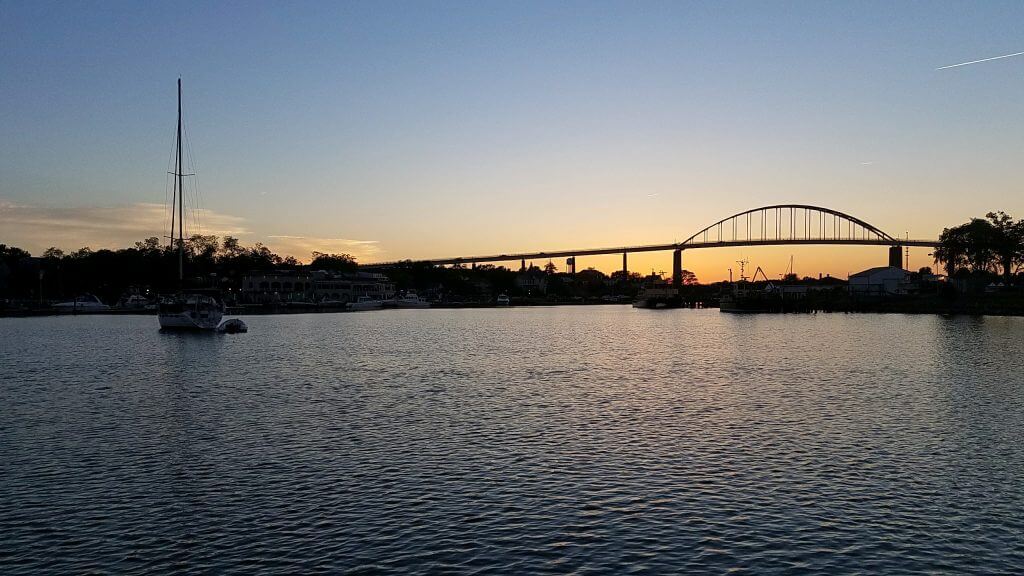 While we desperately wanted a nap, a head issue along with a broken starboard nav light took precedence. After a few hours of work on the head, we realized we would need parts, so we reluctantly admitted we would have to let the weather window pass that evening. Instead, I booked an Enterprise rental car, and we settled in for a few days in Chesapeake City, dealing with the cold as best we could.

Running around the next day, we got our parts and then solved our boat problems. Unfortunately, the weather forecast did not look great over the next few days with 15-25 out of the south and east, which would surely stack up the waves against the ebb current on the Delaware. Throughout the day, more folks had entered the harbor, and we got to know a few of the boats and their crew, including Bob, a single-hander bound for Norwalk on a beautifully equipped and maintained Tashiba 40, a sister-ship to Kerry’s Bob Perry designed Tashiba 36 pilothouse. We also chatted with Larry and Wilma, a Canadian couple on their sixth and final trip north from the Bahamas. While they were obviously content with spending more time with the grandkids and traveling in their RV when they returned, I could not help but feel a little wistful for them as they had clearly enjoyed their time cruising and had done what so many folks only dream of. 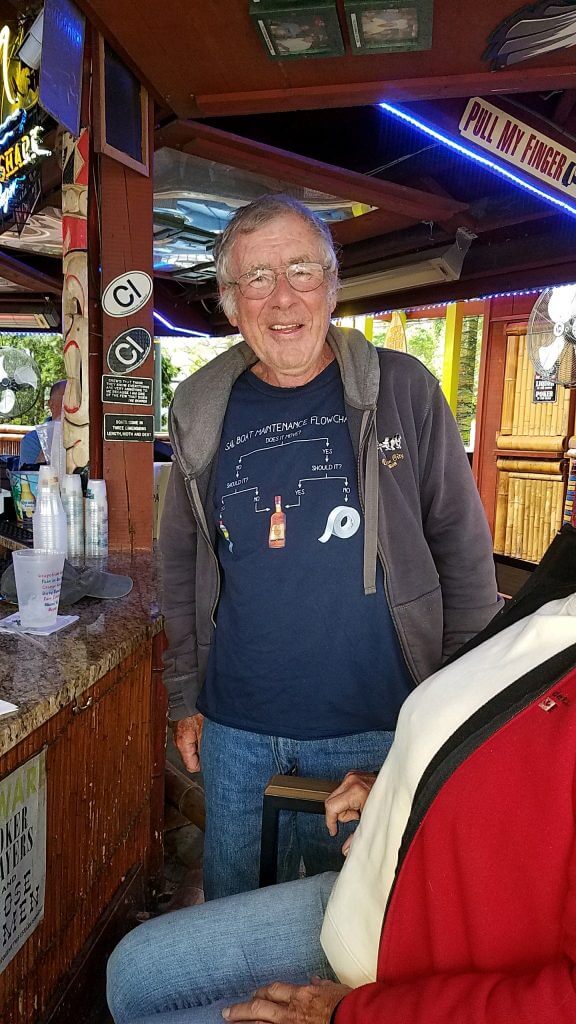 Larry with the troubleshooting flowchart that has served him so well the past six years emblazoned on his shirt.

The next evening, a few more cruisers came in, including another pair of Canadian boats – Dagney and 2 Outrageous – also coming back from the Bahamas. None of the Canadian boats were in too big of a hurry because the Erie Canal was not set to open until the 19th of May, but these recent additions thought they would prefer to while away the time until then in New York City rather than Chesapeake City, so they planned on dropping the river at the next available opportunity. And though winds were still predicted to be gusting to 25, the forecasted direction had changed to southwest, giving us, Dagney and 2 Outrageous, and a couple other boats hope that we would be able to make our run the following day.

We will have the rest of the trip report up in a few days!