This is the second post on our trip north from Rock Hall, Maryland, to Newport, Rhode Island, in early May 2017. You can read the first installment here.

We awoke in the morning at about 6:30 and were both instantly checking the weather. The forecast still looked good – 15-20 knots out of the SW with gusts to 25 – so we decided to go. The Minnesota boat – a forty-something sloop with a family of four aboard – had already left. And 2 Outrageous and Dagney were stirring as we hauled anchor and negotiated the entrance to the Chesapeake City basin, which was fairly easy as it was near high tide.

Still about 2-3 hours before the current shift at Reedy Point, the C&D current was still with us, which surprised me and did not comport with what Eldridge indicated should be happening or my previous experience in the canal. But we were not complaining and rode the flood all the way to the river. As we did, 2 Outrageous and Dagney slowly caught and passed us, checking in on the radio as they did so. Everything was fine with both boats, and we planned to keep in contact as we went down the river.

When we entered the Delaware, things were calmer than I had imagined. With 10-12 knots and little chop, getting the main up was easy, especially with the newly lubed sail track. We tied in a single reef, anticipating the higher gusts and looking for an easy trip. When I got back to the cockpit and started rolling out the genoa, we encountered our first issue; the port cockpit winch – the same one I had just serviced – was not working with a winch handle. I knew it must have been something I did, but I was not about to take the winch apart and risk losing parts overboard while underway. So, we used the winch as a turning block and brought the genoa sheet across to the starboard winch. While inelegant, the solution served us well to Block, where I finally broke down the winch again and, after much confusion, figured out that I had put the very first gear in upside down (lesson learned – just ensuring that the winch turns after servicing is not enough; I also need to test whether the winch handle works). With the genoa now nearly all the way out, we cut the engine and began making six knots in what must have been a nearly slack current. 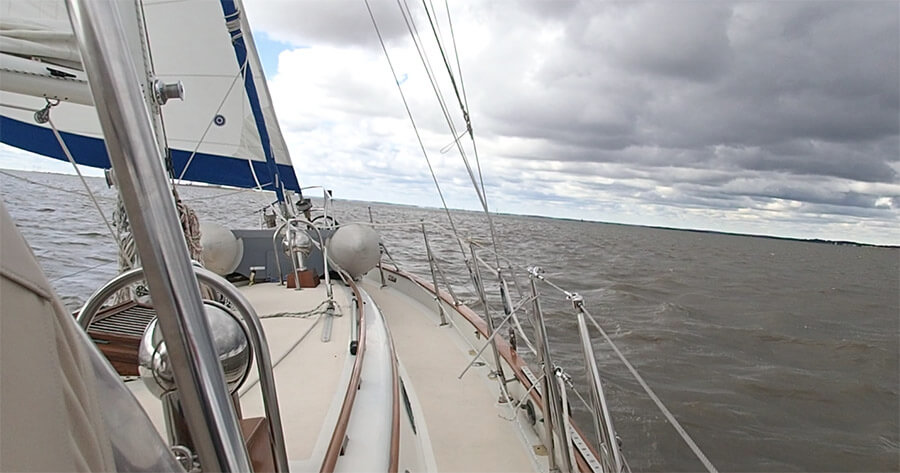 As we proceeded by the nuclear power station, we started picking up more speed as the current began ebbing and the wind picked up. We were now seeing gusts in the twenties and sustained winds in the mid to upper teens. With the strong current and wind, steering was difficult and the autopilot could not handle it. While I feared the system may be out for the rest of our trip – I knew its vulnerabilities and the precariousness of our recent fix all too well – I imagined that the conditions, particularly the heavy pressure on the helm, were just too much for our elderly unit to handle. This bout of wind lasted about an hour, and we reefed in some more of the genoa to deal with it, shaking it out again when the wind dropped.

Kerry and I were still discussing whether we should push on towards Block or tuck into Cape May for the night. Though we were still undecided, the winch and autopilot issues along with the cold and Kerry’s lack of thicker foulies were definitely pushing the pendulum towards a good night’s rest at Cape May.

As the day went on, we could still hear the two Canadian boats on the radio, but had lost visual contact; they had, as we used to call it in junior sailing, “pulled a horizon job” on us. We did, however, catch up to the Minnesota boat. Near Miah Mull Shoal, right as the wind started piping up for the second time, they changed course, heading towards the tip of Cape May. We could not imagine that they would be able to make it through the canal with their height and depth, but perhaps they were going to shoot through the shoals just off the beach. Though it was tantalizing to cut off some distance, we were not interested in risking the shifting depths and possibility of breaking waves. Instead, we continued to head to the eights, the series of buoys that mark the southern end of the shoals at the mouth of the bay. Now in the wide open bay, the wind continued to blow hard for the next 1-2 hours, and the current started to shift against us. With the change in current and our proximity to the ocean swells, the waves started to stack up more too. Somewhere in the middle of that time, we took in a second reef on the main, which lightened the helm considerably and made the entire experience a lot more comfortable. 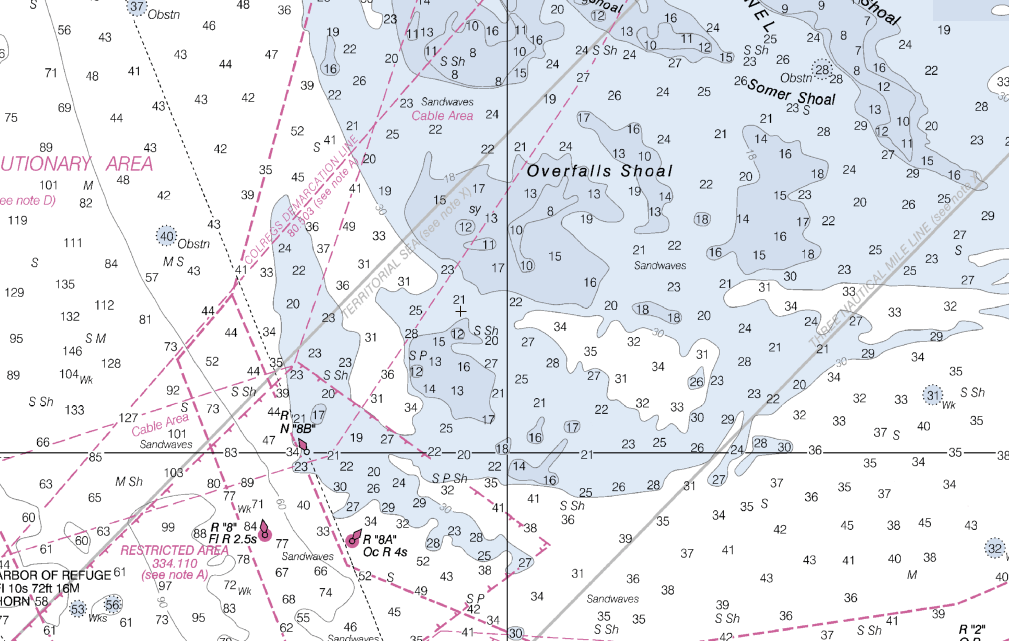 The eights with the shoals to the north between the channel and Cape May.

Before too long, we rounded the eights and the wind started to ease, continuing to die off as the late afternoon wore on and we made our way over the ten miles to the Cape May Inlet. By this time, we had decided to rest in Cape May for the evening and reassess the weather in the morning. With that decision, our only concern at the moment was whether there would be enough space for us to anchor off the Coast Guard station in Cape May. The Canadian boats had been communicating with friends who were already in the anchorage, and they had indicated that there were two barges and 8-10 boats making for a rather tight arrangement. However, when we came in, all the boats were hugging the channel, staying away from the charted shallow depths nearer shore. From previous experience, I knew the water was considerably deeper by the rip rap than indicated and that the noted piles on the chart had long since been removed. With Kerry at the helm and me at the windlass, we anchored perfectly without having to say much of anything to one another. Secure in the anchorage, we straightened Bear and settled in for some hot showers, warm food, and a welcome rest as a beautiful Cape May sunset spread over the harbor. 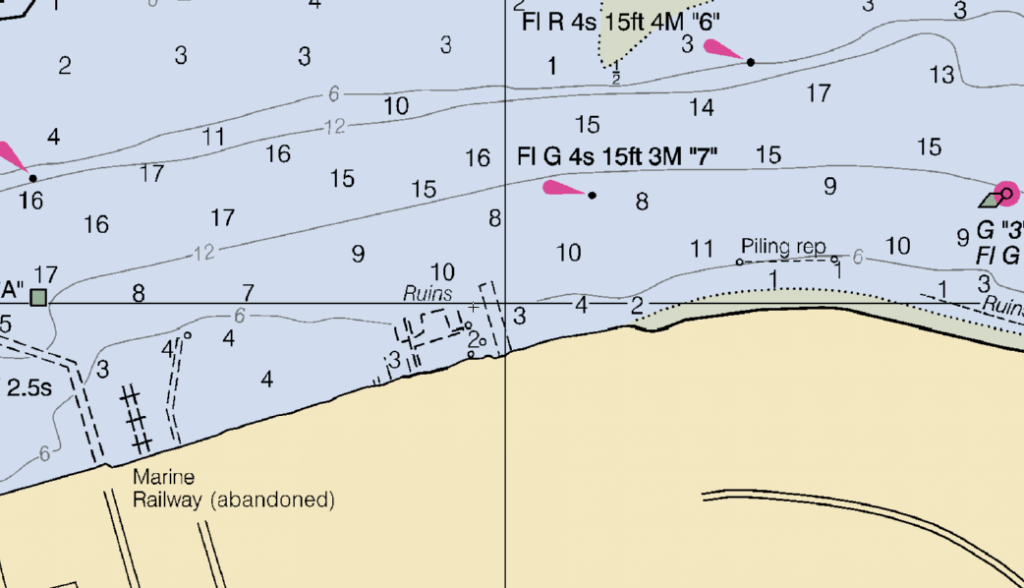 The anchorage at Cape May – In our experience, the depths along the south shore are deeper and the ruins and reported pilings are not there. Of course, do your own due diligence and use your own judgement.

The next (and hopefully final) installment on the trip north will be up soon.