A Cruising Guide to Essex, Connecticut

There are a lot of reasons to go to Essex, from its rich maritime history to its excellent birding and scenic beauty. But what first brought us to the Connecticut River town was more basic: current and storms. Leaving Port Jefferson and ultimately headed to Block, we were looking for a stopover so we would not have to fight the Long Island Sound currents. A front was also forecast to come through the next night, bringing wind and storms, so a snug anchorage would provide some comfort. With relatively few secure anchorages on either side of the Sound between Port Jeff and Block, Essex became our destination.


Crossing the Sound as dawn broke on a new workweek, we read up on what was waiting for us in Essex and quickly realized we were lucking into the best night in the town, for Monday evening is when folks gather at The Griswold – the local inn and tavern – to sing sea chanteys with The Jovial Crew, the regular band. We planned our day around it and were not disappointed. About 75% of the crowd in the bar seemed to be locals who knew all the words to the chanteys and, in good form, sang along with the band. The rest of us marveled at the palpable sense of community in the barroom and the maritime heritage that the chanteys embodied, all while doing our best on the refrains. Everyone was incredibly salty and quite friendly. Before it got too busy we befriended our bartender and, later, talked at length to some guys who worked in one of the yards and met a scientist from Woods Hole who insisted he give us a tour of “the Institute” when we made it out that way. Chanteys at the Essex turned out to be one of the highlights of our summer and something that we will be sure to experience again. 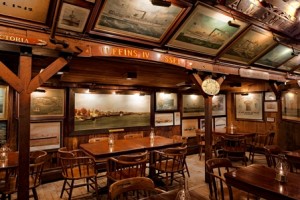 The taproom at the Griswold Inn (from http://www.newenglandinnsandresorts.com/)

The Griz, as it is affectionately known, is a neat little place itself, worth a visit even if you have the misfortune to be there on a day other than Monday. In addition to the typical charm that all the colonial and early national era inns and taverns that dot the Middle Atlantic and New England exude, the Griz has Currier and Ives maritime prints lining the walls, a fine selection of craft beer and cocktails, excellent food, and a familiar, comfortable ambiance. In addition to the taproom, they also have a full service restaurant, a wine bar, and a nice patio. Founded in 1776, there is no doubt that the Griswold has witnessed a great deal of history while serving as a center of the community for more than two centuries. 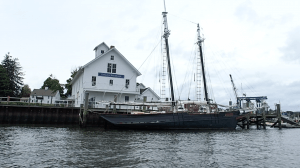 The Connecticut River Museum and the schooner Mary E.

Beyond the Griswold Inn, the village of Essex has a rich history itself. It began to grow as a shipbuilding center during the Revolution and became one of the largest such ports during the wooden ship era. Since then, the town has gone through numerous transformations, but always maintained deep connections to the sea. That link continues today, most visibly with the four large marinas and the yacht club dominating the waterfront. And the Connecticut River Museum presents all of this history from its own campus along the river at what used to be the steamboat dock.

Swallows along the Connecticut River (from ladykatecruises.com).

In addition to discovering the town’s past, you can also explore the creeks and backwaters in the area. Margaret and I took the dinghy all through South and North Coves, stalking wildlife and ogling the yachts. Later in the summer, on Bear’s return trip south, my Dad and I circumnavigated Nott Island around sunset, watching birds, including tens of thousands of swallows swarming at dusk, and enjoying seeing the full moon and stars start to emerge. On both visits, just sitting in the cockpit, we watched dozens of birds – perhaps even some migrating tundra swans (we could not be certain of our id) – cavorting around us throughout the day. And the scenery on the river is pleasing as well with hills towering over the marshes along the water upstream. 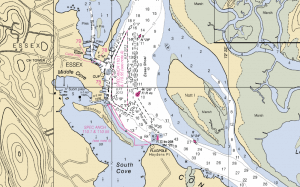 The Connecticut River at Essex.

The only real drawback to Essex is that there is not that much more there than the Griz, the past, and the pleasing surroundings. The population of the village is aging, with many retired homeowners spending the bulk of their year elsewhere. And the town, like so much of Connecticut, has grown wealthier, causing storefront rents along Main Street to rise. The combination of these two factors has driven out the more practical businesses like the village grocery, which went out of business a few years back, and the liquor store, which just relocated to the strip-mall infested main road a few miles outside the village. Desperately needing drinking water and some fresh produce, we ended up having to settle for a few gallons from a hose and our own canned veggies because there was no place within walking distance to get those necessities. There are a few ice cream shops, a coffee shop (Essex Coffee and Tea), a sandwich place (Olive Oyls), and another restaurant (Black Seal Grille), along with all the high-end boutiques one could desire, in the village. 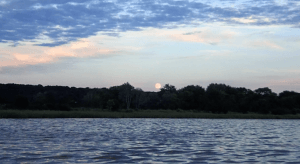 The moon rising over the marsh along the Connecticut.

Despite the lack of basic goods and services, Essex does have one of the most comfortable libraries that we have used during all our cruising along the East Coast (and we have spent lots of time getting work done in them over the past couple years). There are comfortable chairs, fast wifi, private study rooms, and a friendly staff. If you are in Essex, you should make the trek – it is about a mile, with a steep hundred yard incline in the middle, from the dinghy dock – to the library, if only to peruse the New York Times and relax in the comfortable chairs and air conditioning.

While the Essex-side of the Connecticut River is filled with moorings, across the channel, there is a large anchorage that, being six miles upriver, is well protected from wind. Current is still an issue, though, reversing after about eight hours on the ebb and four on the flood with the flow of the Connecticut adding considerably to the former. Though the current courses through the anchorage, the holding is excellent in thick mud. A lot of pleasure traffic comes through the area during daylight hours, but most everyone observes the no wake markers even though they are far outside the channel, cutting the bend in the river. From the anchorage, the town dinghy dock is straight across the river, just south of the museum.

We certainly plan on making it back to Essex on a Monday for the sea chanteys at the Griz. But we also want to explore further up the Connecticut. Just a mile past the town is Hamburg Cove, which looks like a cozy little hurricane hole. And several other towns – East Haddam, Chester – and natural areas – Selden Neck, the Salmon River – beckon just beyond that. In fact, the river is navigable past Hartford all the way to Middleton, some 75 miles from the Sound.