Yesterday, from New London to Manhasset, started out lovely, but turned into a beast.

Right on schedule, we all raised our sails, dropped our moorings, and headed down the Thames into Long Island Sound. There was not much wind, but what there was of it had already shifted around to NNW. We – Bear, Jade, and Jabiroo II – all motor-sailed, kept in contact on the VHF, and fought the current on what was an exceptionally warm night, in the low 50s.

By 2am, with the genoa out and a double-reefed main, I finally turned off the engine. Over the next couple hours, our speed increased from the low 5s to the low 7s as the wind increased and the adverse current slacked. By 4am, I was starting to feel a little out of control and took the prudent measure of swapping the genoa for the staysail. That dropped my speed back into the mid-5s, but I felt a lot more comfortable, especially knowing that more breeze was on its way.

While the wind increased, the temperatures dropped, but I still felt quite comfortable in the enclosure. In fact, it was not until right after the sail change that I put on my overalls. A bit later, I took a little nap, awaking to find we were making in the upper 6s. At the time, the increased speed seemed as much attributable to the current as wind. But by 6am, it was clear that the wind had come on and then some. We were heeled hard over and the breaking dawn revealed white caps and a nasty steep chop set up by the west component in the wind on the now flooding current. 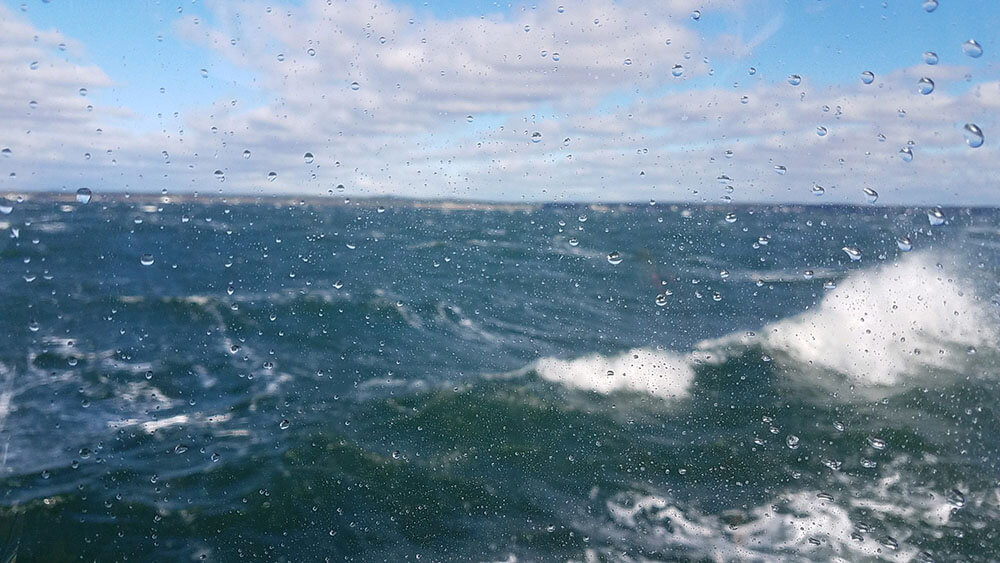 The whitecaps through the spray-covered and salt-encrusted enclosure at one point in the morning.

The morning light also allowed me to see that the block for our port running backstay – the one that was not in use and clipped to the aft chainplate on that side – had come apart. It turned out the pin that had held the bitter end had somehow come loose or broken away, perhaps as we sailed along with the rail in the water. The ring-ding on it had bent a few days before, which is the only clue and explanation I can think of. Though the line had stayed tied to the upper block, I knew I had to go out there and secure it all before it got completely free and made an even bigger mess. Tying everything down only took a few seconds, but I had a few dunkings to my waist and over my arms, soaking me pretty good, as I knelt on the port rail. Had it been a calmer day, I surely would have changed my clothes, but I just opted to carry on, which was just as well, because I would take a few more waves as the day went on.

Our running backstay after I repaired it. It was the pin at the top of the bottom block that had disappeared.

Looking at the weather, we had expected things to start abating around 8am. But eight o’clock came and went and, if anything, the wind only increased. Jabiroo, a few miles behind me now, was seeing gusts into the upper 30s at this point. And I was wishing I had taken down my mainsail already (I hadn’t because I thought the wind was going to slack off again) or had the third reef ready to go (a project that has been on the to-do list since the spring when I had the sailmaker put in the reef points). But I figured I would have to turn on the engine to get us into the wind to take down the sail and, even then, it would be a nasty job.

At Stratford, I finally met land on my westerly course from off New London.

By 10am, I was nearing Bridgeport and the wind turned up another notch. Not twenty minutes before, I had reassured Jade behind me that it was no worse in my area and that the seas had lessened as I closed with the point at Stratford, getting into the lee of the north shore even more. But now, I felt like I had nearly lost control of the boat and that heading into Black Rock Harbor, the recreational side of Bridgeport, was the way to go. Just as I fired up the engine, Jade called again, asking if I was sure it was better where I was. I relayed the situation and my plans, then turned north towards the shipping channel, figuring to get the main down in the lee of the land before heading another mile or two west to Black Rock.

When I reached the first marker, I felt comfortable going on deck and taking the main down. And I did so without much fanfare save a couple good soakings. When I got back into the enclosure and turned west to Black Rock under engine and staysail, everything was more controlled. Quickly, I radioed Jade that I was going to press on to Manhasset, thinking that the window down the Jersey coast the next day was at stake. They replied that they were still planning on putting in at Black Rock.

Another shot of the conditions at some point in the day.

For the next fifteen miles or so to Stamford, I hugged the north shoreline. The wind was still wicked, but the waves were considerably smaller there. There were even a few moments when I thought the wind was really coming down a notch before a blistering blast would punish me again. What was more surprising was the amount of traffic. There were a few center console boats fishing in the lee of the Norwalk Islands, some motorboats transiting west, and sailboats heading both east and west (on AIS). I doubt anyone was out for a pleasure sail, especially the bulk of them without enclosures or pilothouses, but folks were probably trying to get their boats in for storage on the weekend, come what may. 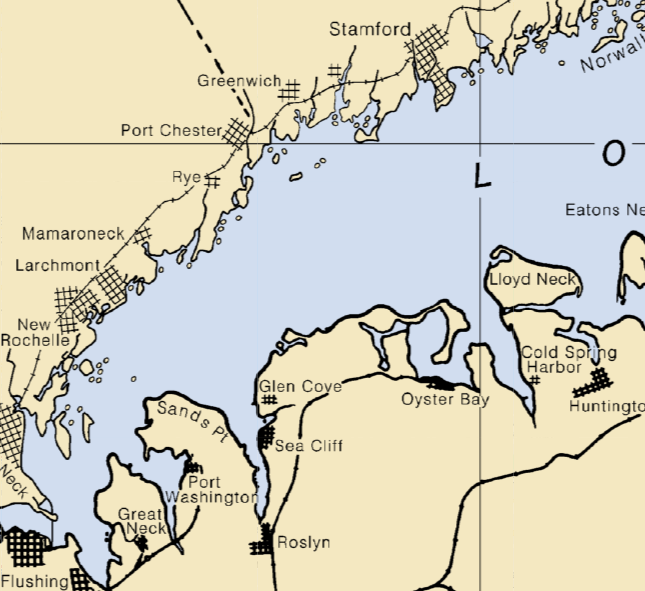 With the Sound narrowing, one would think the wind and waves would have lessened more, but not so much. Manhasset Bay is in the left bottom corner at Port Washington.

At Stamford, I finally noted a hint of relief in the wind and set a course direct for Manhasset, cutting off four or five miles in the process. With the new course, I was able to make in the 5s and low 6s under reefed staysail alone for about an hour. But then, out farther in the middle of the Sound, the boat started to slam into the occasional swell, halting progress. I fired up the engine and motor-sailed the rest of the way.

Rounding Execution Rocks at the entrance to Manhasset and then picking up a mooring put an end to the worst of it. However, I still needed to clean up the mess that was below, including a good deal of saltwater that had come in through our leaking butterfly hatch when we took waves over the cabin-top. But almost immediately, I made a cup of tea and checked the weather, only to find that the window down the coast had disappeared with SW winds reigning all Monday afternoon and overnight.