Heading ashore from Fogg Cove in St. Michaels, we had to round the point into the main harbor, which was a real treat. The Chesapeake Bay Maritime Museum stretches on either side of the point, with skipjacks, bugeyes, and other old boats lining their docks and the reconstructed Hooper Strait lighthouse lording over the whole scene. As we came around, we drooled over all the wooden boats and seemed to be constantly waving at folks along the bustling waterfront and harbor. As we made it further into the cove, we passed the iconic Crab Claw restaurant, busy with Thursday night diners, before finally pulling up to the well-maintained, public dinghy dock.

The Hooper Island light with a skipjack to the right and a few other boats, including another skipjack, off to the left

Our walk into town mirrored our dinghy trip; we ambled along, stopping to look at the boats and houses, waved hello to and greeted other walkers, and took in the pleasant ambiance of the town, passing over a small bridge before ascending a cozy and attractive street to the main road. I had remembered St. Michaels to be a lovely town from my previous stop. However, it seemed even more inviting than before. Of course, last time I had come off my Catalina 22 in Long Haul Creek and hitchhiked in with my buddy and a load of laundry. It was, to say the least, a little more romantic to be walking arm-in-arm with Margaret this time than dragging a bag of dirty clothes alongside Jonny, both of us scruffy and unshowered. 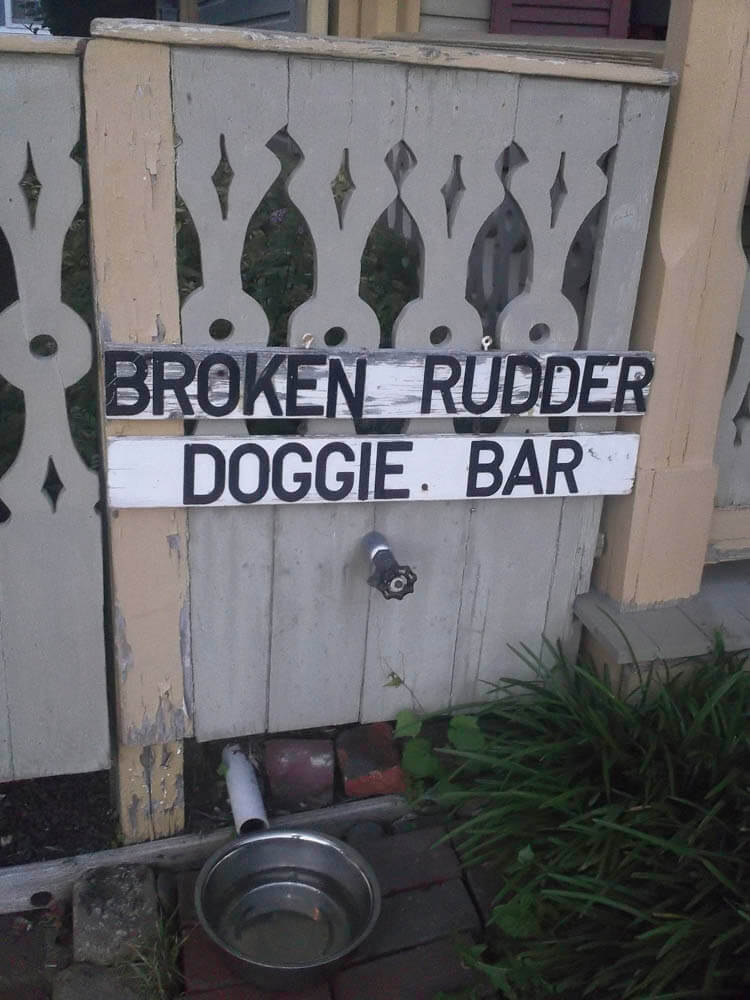 Another doggie bar somewhere on the streets of St. Michaels

Margaret and I slowly cased the town, peeking in shop windows, reading menus, and already contemplating staying an extra day or two beyond what we had planned. Not quite hungry enough for dinner yet, we stopped into the Carpenter Street Saloon, a fixture in the center of town. Jonny and I had a few beers there on our previous visit, and so I knew it had a comfortable atmosphere, frequented by locals and tourists alike. What I did not realize was that it met just about all of Margaret’s and my criteria for a tavern. Not only was everyone friendly, but the bar sported cheap beer ($2 Natty Boh), free popcorn, and a pool table in the empty upstairs barroom. We stayed there long enough to drink a few beers, meet some of the locals, and for me to legitimately win my first game of pool against Margaret (as in, win by me sinking the eight ball, not her scratching on the eight ball while I still had five balls splayed across the felt).

Margaret on the pool table

Margaret with one of her C-Street friends

Leaving the bar, the sun had set and the streets of the town seemed festive and sort of mysterious, with Christmas lights strung across some of the side streets and people walking about in the warm splendor of a midsummer evening. Thinking back on it now, it seems almost dreamlike. Though nothing remarkable really happened, the feeling that something special could be around every corner lingered in the air. At one point, we walked through a back alley, passing an artist studio invisible from the main road. With tools, various found objects, and half completed sculpture strewn on the loading dock of what appeared to be a turn-of-the-century warehouse, two happy artists sat enjoying a bottle of wine in rickety chairs, seeming to confirm that joyous, even if entirely mundane, events were happening all around us, just outside of our view.

We eventually made our way to the edge of town on the main street, where we found a funky little restaurant, Gina’s Café, that seemed to embody the feeling of the town on this night. The place was eclectic and almost tumbledown, with a small bar, a few tables inside, and some more outside in the garden alongside the building. Sitting down at one of the indoor spots, we took in the menu, composed of appealing twists on traditional Mexican dishes, highlighting seafood and produce, much of it seemingly local, in some amazing flavor combinations. We had a hard time deciding between all the scrumptious sounding food, as we lingered over drinks, homemade tortilla chips, and several dips along with a fresh salsa. Eventually we settled on a variety of tacos that had us licking our fingers and wishing we had not eaten so much popcorn back at the bar. The atmosphere only added to the charm with mismatched plates, mason jar glasses, and fun and tastefully jumbled décor.

The entrance to Gina’s Cafe

Finally leaving Gina’s we headed back in the direction of the dinghy dock, taking a roundabout way through the various side roads, finding more quaint buildings and streets along the way. St. Michaels really enchanted us that first night and provided such a great contrast with Annapolis, which we also loved, but, with its commercialism and bustle, had such a different feel.