A Review of Selina II, a Beautiful Catboat with a Great Captain in St. Michaels

As I said in a previous post, Margaret had scheduled a shoot with Captain Iris of the Selina II during our visit to St. Michaels. It was not long after dropping anchor that we got our first glimpse of the boat and captain, as they circumnavigated the harbor under sail with a four-person dinner party aboard. Immediately, I was taken by the graceful lines, rich teak, and massive sail of this huge, forty-one and a half foot catboat. At the helm of this enchanting boat, working her way under sail through the narrow space between Bear and the docks of the maritime museum, was a fitting captain. In a white shirt, khakis, and a straw hat, Captain Iris matched the Bristol look of Selina with her own casual yet completely proper and appropriate nautical attire. And, in much the same way that the well-kept, classic catboat provided the perfect welcome to St. Michaels and the reverence that town has for maritime history, Captain Iris gave us a big smile and hearty wave as she passed, making us feel like we were good friends returning to town. 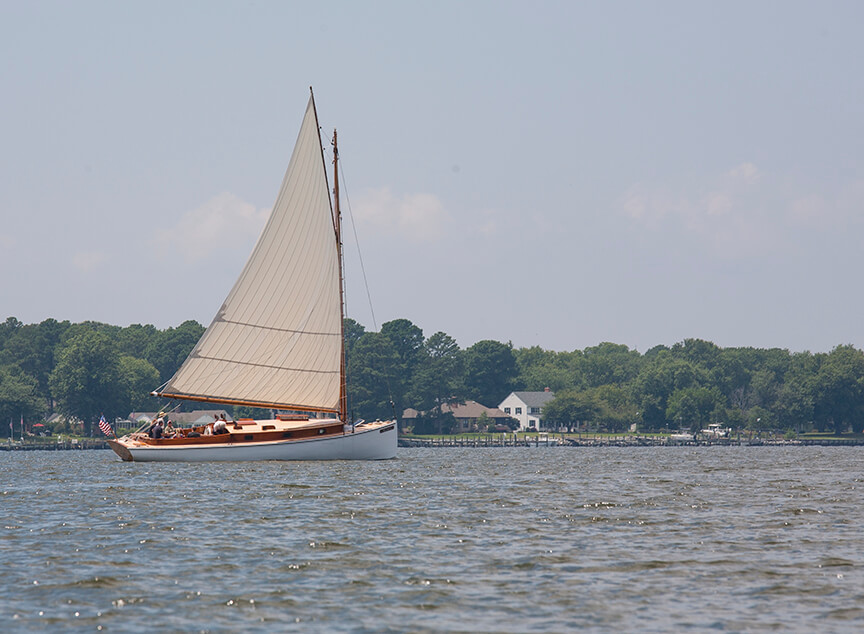 Selina II out on the Miles

Normally, Margaret takes the dinghy to her shoots, and I never meet the women she photographs. Occasionally, I might get a quick glimpse of a boat or a short introduction to one of her subjects if I happen to drop Margaret off so that I can still get around while she is taking pictures. To be honest, I feel a little awkward, like a third wheel, in these situations, so I usually keep my distance. But, when Margaret said Captain Iris had invited me to come aboard for a sail during the shoot, I jumped at the opportunity to get a ride on such a beautiful catboat. So, in the late afternoon of our first full day in St. Michaels, Margaret and I loaded up her camera gear and took the dinghy across the harbor to Selina’s berth.

Pulling up to Selina II, we tried to carefully tie up the inflatable so it would be out of the way of both the catboat and the neighboring slips. Shortly after we got onto the dock, Captain Iris and her first mate, Frank, greeted us, making me feel instantly welcome just as the captain had in the anchorage the night before. A moment later, another couple arrived, evidently paying guests for the two-hour trip. They were as excited to be aboard as I was, but I like to think I contained my enthusiasm a little more. Regardless, it was clear that, at least for a certain type of person, the prospect of sailing on Selina II provoked some real enthusiasm. In fact, the husband continued to pepper Captain Iris with questions and adulatory comments about the catboat while her and Frank untied the lines and, in reality, the rest of the voyage. 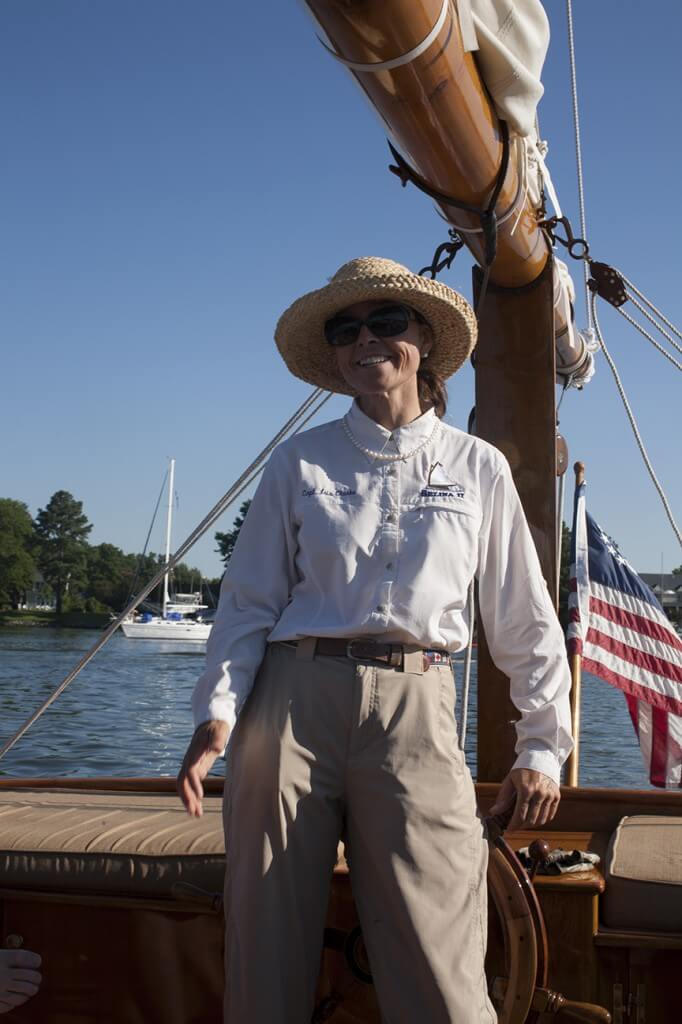 Captain Iris at the helm

As Captain Iris patiently responded to the man, we motored around the harbor. Margaret carefully paced around the cockpit, which was expansive, framing photos, adjusting her settings, and generally looking like a professional photographer. Meanwhile, I just sat back in the comfortable director-style chair and took in the scene. I also had a million questions, but somehow it seemed more appropriate to just enjoy the moment rather than satisfy my curiosity about Selina II and Captain Iris. Besides, the couple, who were up from Tennessee on a vacation while one of their children attended a lacrosse camp in Annapolis, were rapidly drawing information from the captain.

Within a short while, I learned that Sweets Shipyard in Greenport, New York, way out on the very northeastern tip of Long Island, built the boat for Captain Iris’s grandfather, and it is has been in the family ever since. A decade or two ago – I have forgotten the exact number of years – Captain Iris had agreed to become the caretaker of the catboat, moving Selina down to St. Michaels from her home waters on Long Island Sound. It did not take long to realize that Selina II was central to Captain Iris’s sense of her own identity, so stories about the boat were inextricably intertwined with the captain’s past and her current family dynamics. But, in telling us about the boat, Captain Iris was not boring us with old family stories; instead, she was expressing a deeply interesting and fundamental truth about how she saw the world, a vision that Selina II had taught her over her lifetime involving responsibility to family, respect for tradition, and service to a tremendous piece of maritime history.

Captain Iris explaining some of the history of the boat and her family (she said she never takes out the photo book, but we were insistent). And that is Frank on the right.

Of course, Captain Iris was also sharing quite a few facts about the boat, its performance under sail, and its upkeep. Selina II carries 1000 square feet of sail in its single, gaff-rigged mainsail. Moreover, the boat does not have a keel or centerboard, making it, as you can imagine, not very efficient to windward. However, without a centerboard trunk, the catboat had a spacious cabin that her grandfather had designed as a comfortable salon and sleeping area for family outings all over Long Island Sound. With the massive sail area and lack of centerboard, Captain Iris reefs the main in anything more than eight knots or so. For us, out on the Miles River, there was only a hint of wind, so we were only making a half knot or so under full sail, and did not really get to see how Selina performed.

Looking up the sail 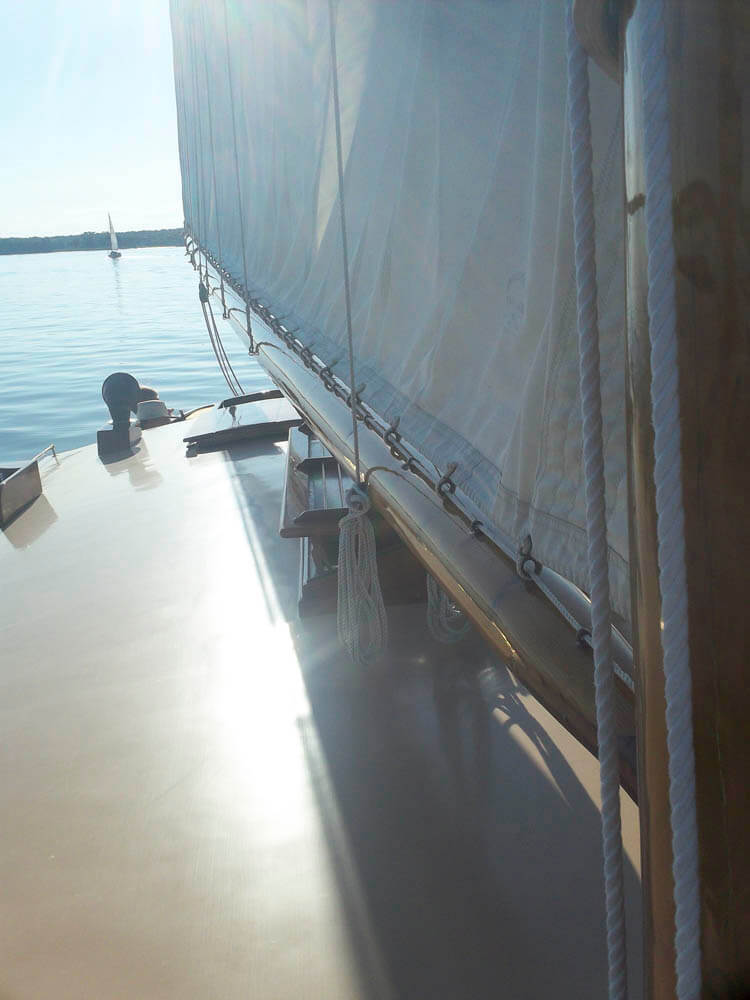 Looking aft from the mast, shortly after we jumped the throat and peak

In the decades since Selina II’s 1926 launch, Captain Iris’s family refitted the boat several times, most recently in 1980 when some of the ribs and timbers had to be replaced. Since then, Captain Iris has kept the boat in impeccable condition, doing extensive maintenance every year and keeping more on top of maintenance than even the most fastidious cruiser. In fact, as we arrived at the boat, Frank was removing the tape from just below a newly varnished rail. As you can see in the pictures, Captain Iris takes her stewardship of the boat very seriously, and Selina II looks amazing because of it. 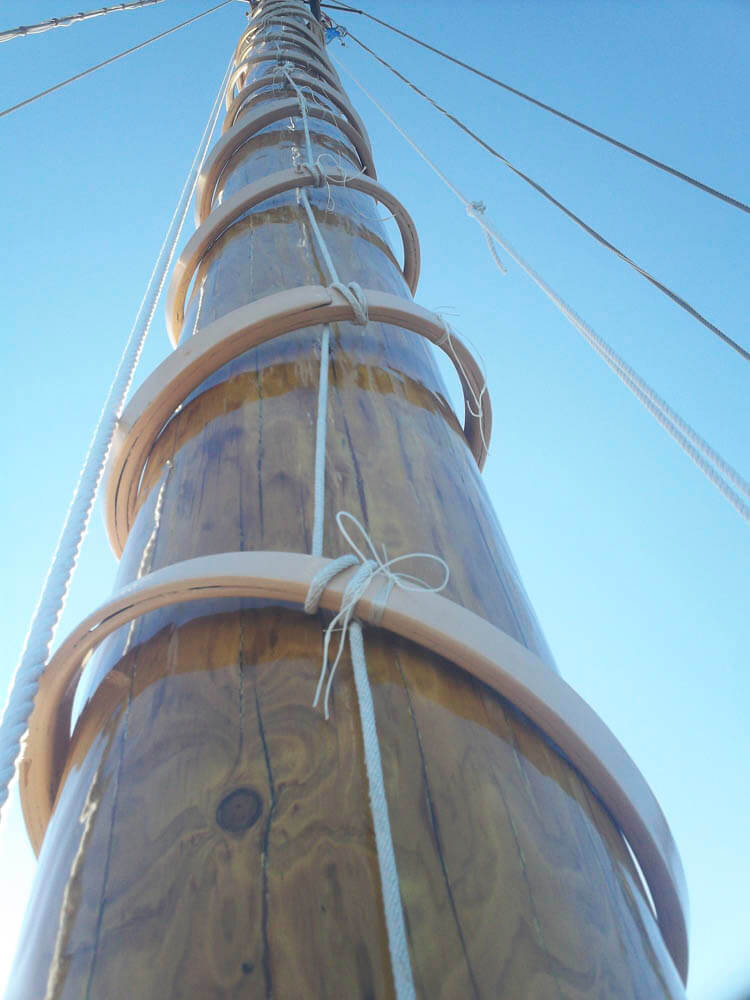 The hoops, rigging, and mast, all beautiful

Even the halyards were in perfect shape and brilliantly white 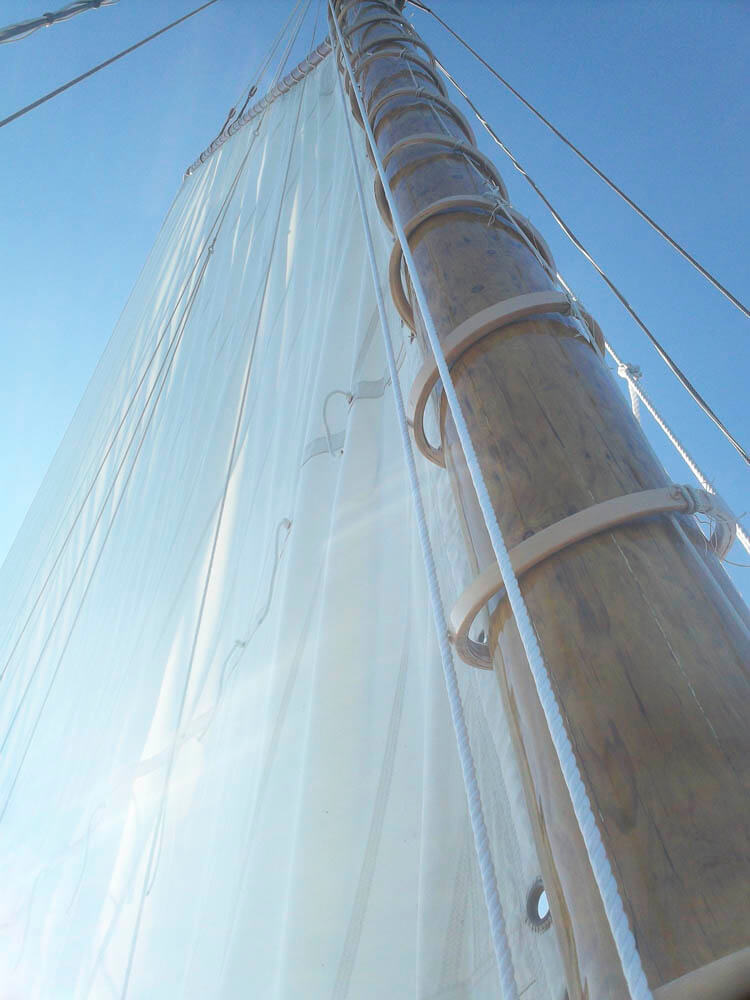 The rigging was exquisite

While I learned a lot about Selina and Captain Iris, I spent most of the time just enjoying being on such a beautiful craft in the middle of the Miles River as the sun made its way to the horizon and Frank continued to ply us all with sundowners, which included a really choice selection of craft beer, wine, and champagne. Under the spell of Selina and her crew, the two hours slipped away quickly, and we returned to the dock as the setting sun started to light up the harbor in amazing hues of red, orange, and pink. Fortunately, I took away some great memories of a special catboat and her extraordinary captain and more than a few thoughts about how boats can shape a life and mold character.

If you ever get to St. Michaels, you really should make sure you sail aboard Selina II and spend some time with Captain Iris. You can find more information on their website. And I recommend booking early; while we were saying our goodbyes, Captain Iris had to tell a hopeful young couple that she was booked up already for the following day.

3 Responses to A Review of Selina II, a Beautiful Catboat with a Great Captain in St. Michaels