After our incredible first night and fabulous sail aboard Selina II, St. Michaels continued to deliver some great experiences, most of it centered around the Chesapeake Bay Maritime Museum. In preserving the bay’s history, the museum is doing a tremendous amount to sustain both the culture and environment of the region, which creates a diverse, intellectually stimulating, and sanguine atmosphere in St. Michaels that is a lot of fun to be a part of.

Unbeknownst to us until we arrived, we had managed to time our stay with the log canoe races in St. Michaels. Developed alongside the oyster industry in the mid-1800s, the log canoes were used by watermen as workboats up and down the bay, although they really trace their origins all the way back to the Powhatan Indians who inhabited the region when Europeans first settled the area. In the late 1800s, the newer bugeye and skipjack designs, with their larger size, power, and carrying capacity, began to eclipse the traditional log canoes. However, at that same time, watermen and clubs across the bay began to race the log canoes, strapping on additional sail area, adding the characteristic hiking boards, and, increasingly, purpose-building new race-ready log canoes. Log canoe racing waned in the middle part of the twentieth century, but has once again become a staple of the Chesapeake racing landscape in the last thirty or so years, with no small help from the Chesapeake Bay Maritime Museum in St. Michaels. There are now about a dozen regattas throughout the summer months on the Chester and Tred Avon Rivers, as well as elsewhere on the bay, though the bulk of the racing occurs on the Miles, right off St. Michaels. 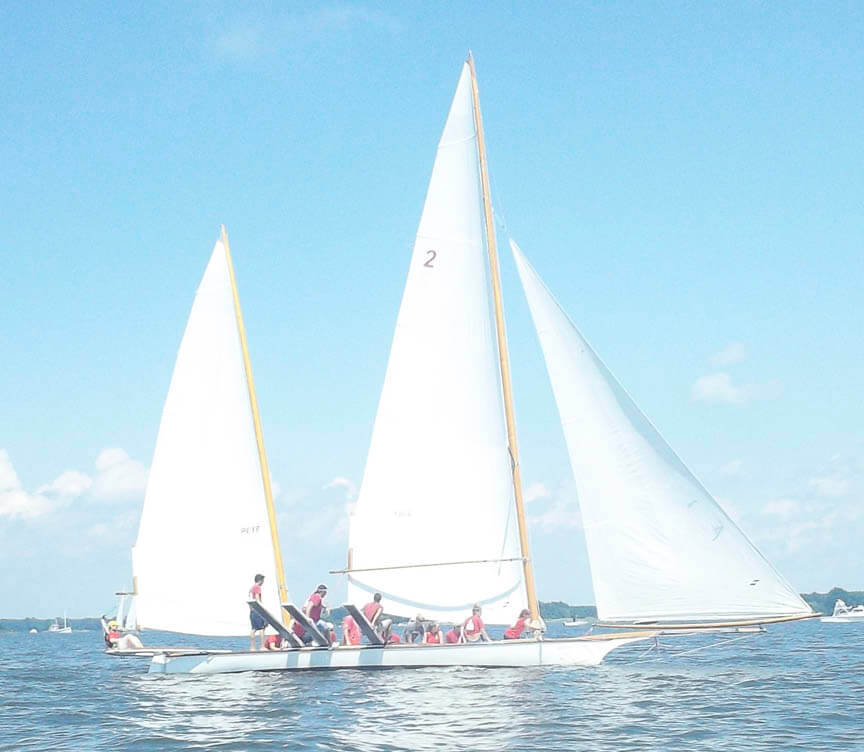 A log canoe cruising in light winds on the Miles River

Upon our arrival in St. Michaels, Margaret had quickly made some connections at the museum with plans to photograph two of the amazing shipwrights there for her Female Mariners Project. Upon hearing that one of these ladies was racing on the museum’s own log canoe, we headed out in the dinghy to try to get some photographs. In our small inflatable and equally tiny outboard, we putted out onto the Miles, followed the action, and tried to stay out of the way of the racing. For me, getting in the middle of a regatta was old hat, having chased after boats for years as a sailing instructor, ran and set courses as race committee, and spectated at every type of regatta, from club racing to the America’s Cup. But despite being married to a photographer, I know little about the technical aspects of photography, with, for example, no sense of how far lenses can zoom or where the sun needs to be to properly light a shot. For Margaret, it was her first regatta experience outside the Wednesday night races passing through the mooring field in Annapolis. So, the race itself seemed like pure chaos to her. While we have a ways to go before we become a crack race photography team, we had a good time working together to try to anticipate where we should be in order to capture some good shots. I quickly learned some basic photography, and Margaret now knows some elements of the starting sequence and that races take place around marks. Although it is probably clear, all of the race photos in this post, however, were taken by me with a little point and shoot waterproof camera.

At the race start 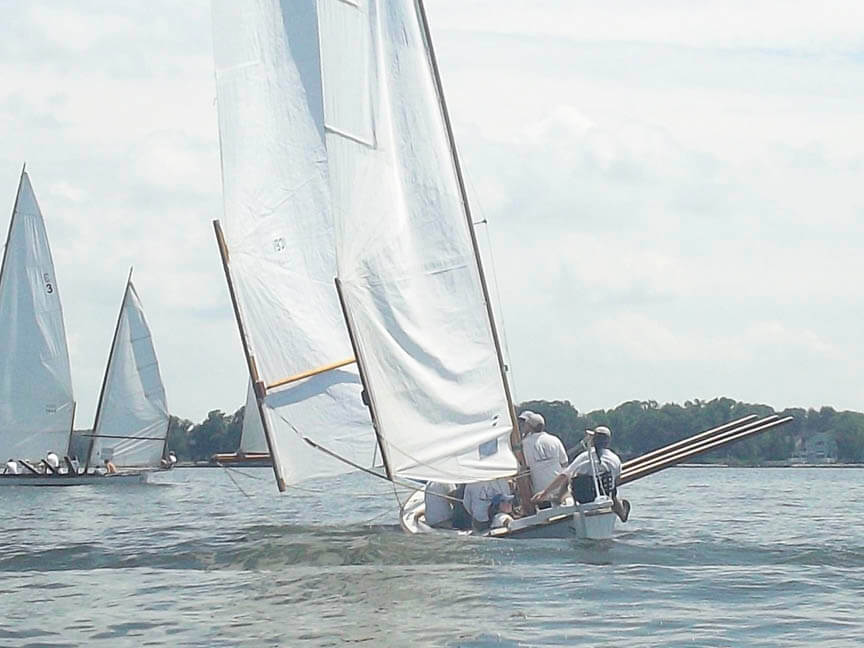 Later that day and again the next morning, Margaret photographed the shipwrights at the museum, while I walked the grounds. There was a lot to take in, from the technical discussion of the evolution of Chesapeake Bay boat design to the hands-on exhibits about bay ecology. What impressed me the most about the museum was the way they had integrated so many disparate pieces into a coherent story about the interaction between environment, history, and culture in the region and had highlighted the virtues of encouraging, supporting, and developing a sustainable and resilient means of living on and interacting with the watershed. The museum readily admits the many threats to the bay and its traditions: over-harvesting, development, eutrophication, and a host of other issues resulting from the millions of people who live in the region and the deeply entrenched interests who are resistant to change. But, at the same time, the museum puts forth a cautious confidence in the power of a truly educated and enlightened public, believing that when people properly value of the Chesapeake Bay ecosystem and the culture it supports they will support, demand, and make change happen. And, the museum itself provides a sort of lived experience of the ways that cultivating an appreciation for the natural and human components of the greater Chesapeake can encourage more understanding amongst stakeholders that, in turn, facilitates positive action.

Inside the boat shed at the Chesapeake Bay Maritime Museum

The rest of our time in St. Michaels was spent exploring more of the bars and restaurants, getting some boat work accomplished, provisioning, and doing work on the internet at the local library and coffee shop. We will review St. Michaels from a cruiser’s perspective in a future post.

Some of the boat work we did, trying to figure out what was wrong with our autopilot