As we got close to St. Marys, Georgia last night, I started to get really excited about seeing Bear and getting aboard once again. Unfortunately, we rolled in after dark, so we were unable to head right over to the boat. However, this morning we made our way to St. Marys Boat Services and found Bear, relocated across the yard from where she was before.

Bear looked great under the new shade cloth that Rhonda, who contracts work at St. Marys Boat Services, put together for us. But we quickly realized that there was no way to access the topsides because the shade cloth was missing an entryway. I called Rhonda on the phone, and she said she would be right down as she was on her way to the yard as it was. In the meantime, I took off what was left of the sacrificial anode, which prevents electrolysis, on the prop shaft. We will be replacing the anode before splashing Bear this summer. Just as I finished, Rhonda pulled up, jumped out of her car, and, together with her son, installed an entryway in just a few minutes. Rhonda putting in the entryway in the shade cloth

Finally climbing aboard, we found the topsides a bit dirty, but nowhere near as bad as they were after two years on the hard in Branford. Going below, we discovered some mold in a few places, most notably the refrigerator, though, all in all, the boat seemed to be in fine shape, and we quickly got to work.

While Margaret tackled a few tasks, I started assessing whether some things needed to be fixed and deciding what sort of materials we needed to purchase. First, I figured out what size the light bulbs in our overhead lights are, as we want to replace them all with LEDs to save power. It was a very easy job and allowed me to check off something from our to-do list.

Next, I removed the ball valves that control the flow of water from our two freshwater tanks. Over time, the hoses had become solidly adhered to the barb fittings, so it took a lot of effort to remove the entire fixture. We needed to replace all these fittings, which we still need to purchase, because the valve controlling the port tank had not been working properly towards the end of the summer and both of the handles were really rusted, suggesting they would both stop working altogether soon. 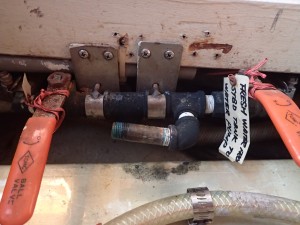 Our rusted valves for the freshwater tanks

After replacing the floorboards that covered all the freshwater valves, I cleared out the lazarette so I could climb in and access the hoses to our manual bilge pump. I needed to do this so I could test the pump, which had been leaking slightly when I had used it during our haul-out. I was not certain whether there was a hole in the hose or just an improperly tightened connection. It turned out to be a hole, which means we need to replace a length of hose. After figuring that out, I removed the offending section and moved on to the next thing on my list, which involved even more plumbing. There is a small hole somewhere along this stretch

While winterizing Bear in September, I unhooked the hose from our raw water (seawater) thru-hull that supplies water to our head, refrigerator (to cool the system), wash-down pump, and hose for an as yet uninstalled seawater foot pump and faucet in the galley sink. When I did that, I realized that the hose was not in the best of shape, which was worrisome considering a failure anywhere along the whole circuit could flood the boat. Today, I wanted to ascertain the condition of all of the hose and fittings that are downstream of the thru-hull. Quickly, I realized much of the rest of the system was in disrepair as well. In fact, the three-way fitting that came immediately after the thru-hull turned out to be made of brass, an alloy that corrodes quickly in seawater and should never be used in plumbing below the waterline. The fitting was already deeply pitted and, in a few places, actually corroded through. Only our good fortune and the fact that the hose had been covering the holes kept us from having a serious, and potentially catastrophic, incident. Needless to say, we decided to replace everything using bronze fittings and Trident Series 148 hose, both of which are some of the best, and few, choices for below-the-waterline applications. That decision meant that I had to measure all the hose lengths and figure out exactly what we needed to order tonight. 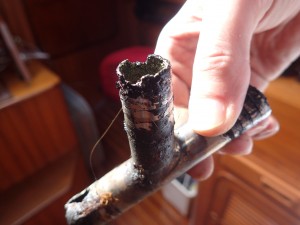 By that time, long after lunchtime, Margaret and I were both ravenous. Moreover, we wanted to make it back to the Cumberland Inn and Suites, where we are staying, to watch Michigan open up its Big Ten basketball season against Illinois. But lest you think we cut the workday short, we spent the evening reading up on boat repair, placing another massive order for parts, planning jobs for tomorrow, and putting together these posts and a video, which will be up shortly on YouTube.

You can check out our video of the day’s work here.