Frustration, Claustrophobia, and a Near Sinking

I cannot say that today was the most productive of days. We worked our asses off, but did not complete too many jobs. But, I guess we are that much closer to actually checking more things off our list.

Rather than detail all the things that we did not quite get finished, I just wanted to relate a couple things about the most frustrating thing I tried to tackle. I am not even sure we will ever really be able to solve the issue, which makes it all the more exasperating. I am speaking of servicing the hose that drains the galley sink, which clogged a couple times over the summer and seems to be nearly full of gunk at the moment. 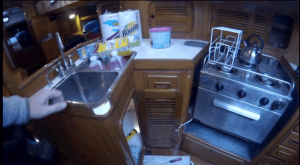 Our galley with the cabinet below the sink open

The sink itself is athwartships, at the end of the forward part of our U-shaped galley. The door that provides access to the underside of the sink, the drain hose, and the seacock, is narrow, approximately ten inches across and eighteen inches high, and located directly under the sink. While the door is relatively small, it provides adequate access to the bottom of the sink. However, the drain hose extends nearly three feet at a 90-degree angle from the sink to the seacock. There is no other way to access the space under the sink and out to the seacock except by the small cabinet door immediately below the sink. By positioning myself just right, I can get nearly my head, upper torso, and one arm into the cabinet to reach the seacock and turn the handle. I am fairly certain that if the seacock ever failed, I could also manage to plug it with the cone-shaped wooden plug that resides right under the sink, but I am not positive. In order to do so, I would have to turn my body sideways to get both arms and my head into the cabinet and then manipulate the plug and a mallet, something that I successfully simulated to ease my own anxieties shortly after we launched Bear last spring. 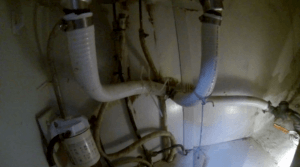 While operating the seacock is possible, doing much else in the deep recesses of the cabinet is not. Today, I was able to loosen the two hose clamps that secure the drain hose to the seacock. However, poor design and lack of space thwarted my attempts to remove the hose itself from the pipe, which requires a firm grip on both the hose and the pipe and a good deal of leverage and manipulation. I also failed to undo the connection between the seacock and the elbow fitting (oh, I did not mention there was an elbow fitting off the seacock!), which would require me getting two wrenches on the pipe, somehow steadying both of them, and managing to exert force on both of the wrenches in opposite directions. Short of hiring a very skinny, really strong person with extremely long arms (not the first time I have wanted such a crew), I am not sure how to proceed. I would just give up, but that is not really a possibility because we actually need to use the sink in the future. My next option seems to be to cut some sort of access panel, which has its own logistical, not to mention aesthetic, problems.

We did get one really good laugh out of my otherwise agonizing and terribly frustrating work on the galley sink drain. At one point I had stopped and told Margaret that I kept having to remind myself as I fiddled with stuff down there that I did not have to worry about water suddenly coursing into the boat should I actually succeed in getting the hose off the pipe. This was a relief because every other time I had attempted to clear the drain we had been afloat and accidently removing a hose below the waterline would have resulted in a nice fountain of seawater and a real test of my ability to plug the hole. A few moments later, I was crammed into the locker when my claustrophobia – the only uncontrollable fear I seem to have – kicked in as I momentarily got stuck. In less than a second, I freaked out, screamed for Margaret to come help me, and, simultaneously, freed myself, immediately dousing all my hysteria. As I explained myself to Margaret, she was having her own, though far less hysterical, moment of anxiety as she thought I had sprung a major leak, even though the seacock was six feet off the ground and the boat was a hundred yards from the water. After we stopped laughing at each other, my frustration with the inaccessible drain resumed.

You can check out the video of our day’s work here.

4 Responses to Frustration, Claustrophobia, and a Near Sinking