Where Will We Cruise First – The Cruising Video Game

In my first three posts on where we might cruise first, I focused on how the location of our purchase and refit, our refit plans, and the season of out departure will affect our initial cruising plans. In the next couple posts, I will explore where Margaret and I would like to cruise first. But before we even get that specific, I am going to describe my theory of cruising experience using a video game metaphor (or maybe it is not a metaphor, but just a plan for a cruising video game). While this exercise surely proves that video games warped my young mind, it should also explain how I think cruisers gain experience and knowledge.

As we say in our “about us” section, part of what appeals to us about cruising is the opportunity to create a more original connection to the world around us, to have the time and mental space to develop deeper relationships with people and places, and to rise to the challenges of learning, and living, whole new skill-sets. To some extent, my cruising video game would also value these things, but it is definitely more focused on learning new things and accomplishing various goals. Like a good adventure video game, it would have multiple – in this case four – interlocking ways of keeping score: a standard point system, different levels that a player passes through, additional badges that one can earn, and a locations visited checklist. I should point out here what I hope is obvious: we will not be keeping score or trying to “win” cruising, though I imagine we will take personal satisfaction in what we learn, accomplish, and experience as we go.

In the game, points can be accrued for a variety of things. The most basic way of gaining points is by covering miles, with more points coming for miles under sail, shorthanded, and singlehanded. A player can also score points by completing boat repairs and upgrades, provisioning, checking in and out of countries, meeting other people and exploring areas, and other everyday activities such as catching fish, changing sails, drinking new rums, etc.

Besides racking up points, a player in the cruising game also tries to work their way through a series of levels:

The idea here is that completing each task is a significant achievement and proves that the cruiser not only learned the skills necessary to accomplish the goal, but also put those skills in to practice (or maybe just got lucky enough) to complete the level.

In addition to the points and levels, cruisers in the game are also attempting to gain a bunch of different badges that give them special skills that can aid them in the gameplay. While I am sure there would be far more badges that one could get throughout the game, here are a couple to give you an idea:

Finally, the game would include a massive checklist of all the places one can visit including countries, ports of call, bodies of water, and more critical sites like famous cruising bars and rum distilleries. Slowly, players would fill in this checklist so that even after all the levels were reached and badges earned, there would always be more sites to see and experience. 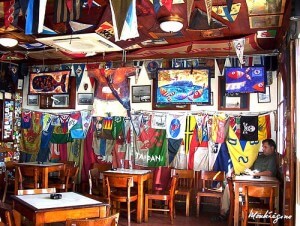 Cafe Sport in Horta would definitely be on the checklist. From monteregina on Flickr.

Just as in the game, I think there are various skill sets that Margaret and I need to learn and put in practice before we can go to the Bahamas, let alone cross an ocean. Next time, I will discuss my own preferences for where we start off cruising and how we go about gaining the knowledge and experience to cruise further.