After waking up from a strange end-of-the-world nightmare, complete with zombies and nuclear holocaust, I was quickly transported back to reality. The pleasant realization that I was not destined to be food for the undead, but rather, would spend the day on a quiet mangrove-covered island became quickly apparent when I crawled out of the companionway and caught site of the anchorage we had navigated into at dusk the previous evening. To our starboard side was a small key bustling with pelicans. To our port side was Cayo Costa, a densely forested island with a small boat dock and ranger station. Off our stern an impassable opening to Pine Island Sound. Off our bow, a small bay speckled with a dozen or so yachts bobbing in the protected waters.

The two of us were eager to get out and explore, so our breakfast was a quick meal of protein bars and bananas in the cockpit. After we lowered the dingy from its davits and packed up a few things for the trip, Jeff decided to start the engine and go for a test run. No dice. The motor would turn over, but would not stay running. Instead of a quick cruise to shore, Jeff got a bit of exercise by rowing us to the dock at Cayo Costa.

Once on shore, we stopped by the ranger station to pay the visitor fee ($2 each) and then began meandering around on the sandy, dirt paths. The island is accessible only by ferry or private boat, so as you can probably imagine, it is rather quiet and undeveloped. We walked leisurely westward, across the island, to the Gulf beach. Along the way we inspected the footprints and guessed at the wildlife that had previously traversed this path. We shared the trail with thousands of millipedes, which journeyed slowly and rather haphazardly across the dirt. We also shared it with a land ferry that transported visitors from one side of the island to the other, leaving on the half hour. The empty ferry must have passed us 2 or 3 times before we reached the shell-covered beach. Standing in a clearing before the dunes, we read the nature signs near the picnic area, identifying the bird species that flocked to Cayo Costa. We walked north along the beach, toward Quarantine Point, a place were the US military used to inspect ships for contagious diseases, pointing out the birds we had just read about.

Back on the trail, we passed a few simple cabins, which allow visitors to spend the night on this peaceful barrier island. They are not fancy – no running water or electricity, but they do have picnic tables and barbecues. Showers and restrooms are in close proximity and visitors can rent bikes and kayaks (and purchase snacks and firewood) at the ranger station.

On our circuitous trip back across the island we took the Cemetery Trail, where we happened upon a turn-of-the-century graveyard whose plots were marked with shells and stones. Captain Peter Nelson, a skipper who died in 1919 is buried there alongside his family. Back at the ranger station we learned the Nelson and Johnson families once inhabited this small island and that ancestors still maintain the grave sites. We also learned that the large metal trap we stumbled upon in the dense mangroves was not for Sasquatch, but instead for wild pigs!

As we tried to leave the dock (dingy engine still not working), a band of rather unhelpful gentlemen gathered around to offer useless advice on the engine situation. Rather than offer to lend a hand, or better yet, a cold beer from their cooler, they instead stood over us and watched as we struggled. Eventually they left and we too departed, rowing back across Pelican Bay to Sojo.

Over lunch we discussed our plans for our next anchorage based on the changing weather. Jeff mentioned that there seemed to be two protected spots from the anticipated S/SW winds – a secluded and small spot near Punta Blanca and the other, a three-hour motor crossing, to the South near Braynerd Bayou. As we ate and talked, we decided we wanted to get the dingy engine fixed so that we would not be limited to rowing and could take a few trips up some of the small inlets and bayous.

The afternoon quickly slipped away as Jeff worked feverishly to get the engine running. He called Mark at SWFY, who was very helpful and suggested cleaning out the carburetor. As Jeff worked on this I assumed the “pink chores” and cleaned up the salon and galley. While we worked we had the constant companionship of a seagull that bobbed in the water just 10 feet from Jeff while he worked. After cleaning, I used the time to photograph the gaggle of pelicans that nested on the small key across from Cayo Costa. I watched as they rhythmically soared and dove in search of fish and then circled above before bringing their bounty to the nest to feed their chicks. 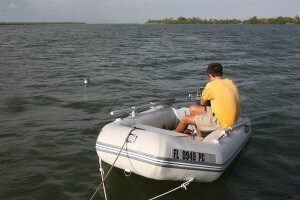 Still working on the engine…now with our pet seagull! 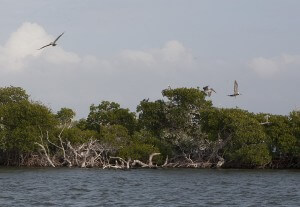 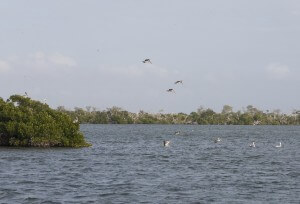 As we worked and watched, photographed and cleaned, we decided to head to Punta Blanca as it was close by and there were still many excursions we wanted to make in this area. Before pulling up the anchor we took one last dingy trip to Cayo Costa to purchase ice (I was looking forward to a rum cocktail that evening) and test drive the unreliable dingy. As we left the anchorage, we remarked that there were only 2 other boats in the bay that held at least a dozen the previous evening, and little did we know that this would be an omen for the remainder of the trip!

We motored over to Punta Blanca, carefully watching the depth finder, as our paper charts clearly marked many shallow spots in this area. As we cleared the end of the island, we looked with the binoculars through the thick trees in search of a mast in what we hoped would be our own private anchorage. Foiled! Another sailboat, about our size, had already staked claim to this beautiful, but tiny, anchorage. As we sailed in, Jeff yelled commands as to how we would pull the sailing equivalent of a three-point-turn in this narrow space. Rather smoothly we sailed in and out, with a quick wave to the lucky folks who would have the place to themselves for the night. 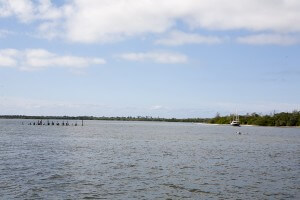 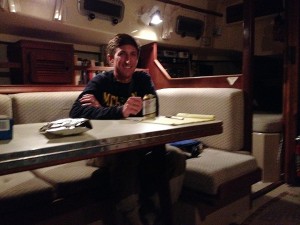 A captain and his beer….much deserved after his battle with the dingy engine!

Downtrodden, tired and quickly loosing light, we decided we would navigate back into Pelican Bay for the evening. After we dropped our anchor, Jeff made us drinks and I made broccoli and pasta for dinner. With full bellies we had a chart meeting to discuss our trip into the Gulf tomorrow and then relaxed with cocktails, a game of Gin and the mellow tunes of The Grateful Dead.