Where Will We Cruise First – Season of Departure and Routing

This is the third in a series of posts on our thoughts about where we will cruise first and the factors impacting that decision. In the first post, I detailed how the location of our purchase and refit will impact our itinerary. In the second, I looked at how we might go about refitting the boat and the implications of that decision on our first cruising destinations. Today, I am going to examine how the season of our departure and basic routing considerations might affect our cruising plans.

While winds can be more favorable for given passages or certain cruising grounds at different times of the year, the most significant seasonal consideration for us will be hurricane season. As you know, the Atlantic hurricane season officially begins June 1st and lasts until November 30th. Occasionally, hurricanes arrive outside these dates, and, over the past few decades, the official end of the season has been moved later in the year as more and more late season storms form. On the other hand, the peak period occurs “from August through October with,” according to NOAA, “78% of the tropical storm days, 87% of the minor hurricane days, and 96% of the major hurricane days…then.” 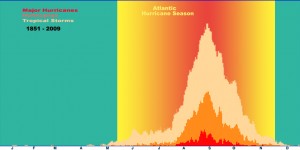 Many insurance policies for yachts designate an area, called “The Box”, where policyholders are not covered during hurricane season. Typically, the sides of the box are delineated as 12 and 35 degrees North and 55 and 110 degrees West: 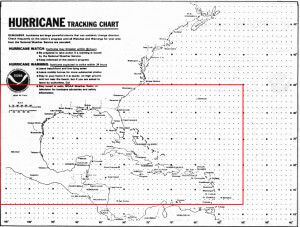 While the box is not failsafe, it offers a good general map of where we will avoid during the months of hurricane season. However, it would not be imprudent, with a careful eye on the weather, to skirt the box, especially at the edges of the season. For instance, departing in June for Bermuda as part of an Atlantic crossing, heading south in the ICW (Intercoastal Waterway) in late October and November, or spending the hurricane season in Grenada or the ABCs (Aruba, Curacao, and Bonaire) would not be out of the question.

Beyond hurricanes, we will also seek to minimize our chances of encountering gale force winds while we are on passage. While we can never eliminate the chances of running into a severe storm (and global weirding is making it harder by the day), we can repeatedly play the odds by avoiding passages and times of the year when gales are more prevalent. We can also plan faster and easier trips by paying attention to prevailing winds and currents. Pilot charts offer all this information, showing monthly average wind and current strength and direction, chance of encountering gales, and other useful information. We will be using these to plan our route in more detail as our departure nears. In the meantime, we have pored over Jimmy Cornell’s World Cruising Routes

, which contains all the essential information for about 300 of the most well-travelled routes around the world, including the best months to make the passages.

In addition to deciding where we are going first, we also need to have at least an inkling of an idea of where we want to be after winter so that we can plan appropriately. For instance, we need to think about whether we want to return to the East Coast, enter the Pacific through the Panama Canal, or head to the Med during the next hurricane season.

While the last three posts have looked more generally at some of the factors affecting our cruising plans, the next set of posts will look at Margaret and my preferences and thoughts on different possible itineraries.


This entry was posted in Jeff's Blog. Bookmark the permalink.