Day 3 was a jam packed day! Check out a bit of footage from the day here. We started with a breakfast of champions – no, not Wheaties, but instead our favorite concoction of scrambled eggs with corn. After an early breakfast, Jeff noticed, and heroically fixed, a near-disastrous head issue. I won’t gross you out with the details, but trust me, this is not a problem you want to have on land or at sea!

I was particularly eager to get going that morning as we were heading out into the Gulf of Mexico where I would get my first ocean sailing experience. We spent about a half hour getting the boat packed up tight for our adventure, being sure to store everything that could fly around in choppy water in lockers or settee storage.

On our way out to the gulf I asked Jeff to give me a few demonstrations on sail changes so that I could have some hands on experience maneuvering the vessel under sail. The first thing he taught me was how to tack and jibe. These are two ways of changing course while under sail, not a 70’s dance move requiring velour and gold lamé jumpsuits. After a few practice tacks I quickly understood the importance of investing in a good pair of sailing gloves and committing to some serious upper body strength training before we do any long-term cruising. The strength of the wind in the sails is surprising and even with a self-tailing winch, the lines were a beast to control by myself. It also became clear to me that I would need to take a couple of sailing classes, as Jeff is a natural on the water, understanding the wind and the tides, and I am a city girl who will need a patient instructor to help me find my sea legs.

The water was a bit choppy as we headed out the Boca Grande Pass under sail. Much of our trip until that point had been under power due to lack of wind. As we left the ICW and watched as the land shrank behind us, I felt a sense of freedom. There had been very little boat traffic in the area during our charter and the Gulf appeared even more deserted. This part of the trip seemed more adventurous than the rest; more a challenge. As we sailed out, Jeff asked me to bandage his badly injured hands from the previous days struggle with the dingy engine. I went below and got out one of the two first aid kits, looking for the best bandage material for comfort and water tightness. As I was playing doctor to Jeff’s hands, I began to feel a bit queasy. Jeff said that it was probably from all the looking down while the boat bobbed in fairly choppy seas. So I took the helm and we changed course, heading back to the protection of Pine Island Sound, in pursuit of calmer waters and showers!

We dropped our anchor just outside of the ICW and took the dingy over to Cabbage Key. At the dock we found showers for the low, low price of $15 each! We said thanks, but no thanks, and instead enjoyed a nice lunch at the Cabbage Key Restaurant, famously wallpapered in dollar bills. We enjoyed some mahi mahi and salad sitting on the screen-enclosed porch of an almost deserted restaurant. We watched as tall, white stork-like birds strolled slowly across the front lawn and swarms of insects festered safely just behind the protective screen.

After lunch we hiked around the island nature trail where we stumbled upon many white egrets and lizards. Trees covered with climbing cactuses and signs explaining the medicinal uses of the flora dotted the path. We made a quick stop at the gift shop to pick up a pirate shirt for Cassius, my 5 year old nephew, and then rode the dingy back to Sojo. As we were rinsing off our sandy shoes and feet in the cockpit, we saw a huge sea turtle about 10 feet off the stern. We watched it for a long time as it lazily surfaced for air and showed us its enormous head. Sadly, I was not quick enough to catch it on film, but this sighting makes me want to head to the Galapagos even sooner!

From Cabbage Key we headed South to check out the infamous Green Flash on Captiva. On our way we saw dozens of dolphins. They would swim in our wake alongside the boat, seemingly showing off for us. As they rolled and jumped in the waves, we couldn’t help but smile and laugh. They seemed to be having so much fun and it was infectious. After about a 2 hour motor crossing we had an easy anchor drop in a shallow area just outside of the ICW near Braynard Bayou. We had a short dingy trip over to shore, where we were pleased to find free docking at the Green Flash. Upstairs, with a beautiful view of the water, was a large dining hall and an L-shaped bar with a sweet bartender named Katy. We ordered a few appetizers – I recommend the stuffed portobellos – and threw back a couple of rum drinks. We chatted a bit with the owner, Andreas, and another couple vacationing on the island from CO. Andreas mentioned that this was the slowest time of the year and we concurred, as we had not seen another sailboat in the area in the last few days. As we ate, drank, and conversed we kept an eye on the weather forecast repeating on the bar television. It was not good news. As the forecaster predicted heavy rains and winds to bear down on the area soon, we packed up and got back to the boat as quickly as we could. 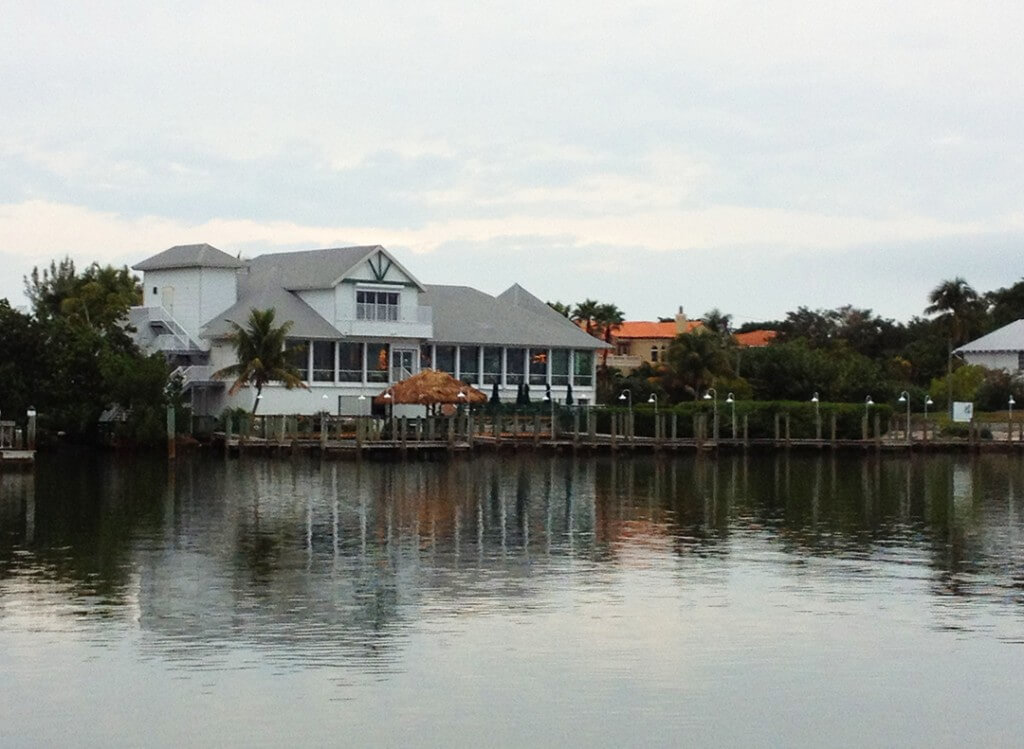 Green Flash from the water

Back in the cabin, we listened to Springsteen on Sirius radio and discussed how much we enjoyed the coziness of the boat. We played cards, had a few more drinks and sat on deck for a while discussing the feel of the different anchorages we had chosen so far. It began to rain and we contemplated taking a deck shower, though in the end the rain was not strong enough. So instead, we called it a night and cuddled up in our berth, wondering how the weather might impact us throughout the night.

Two hours later, I was startled awake, despite my ear plugs, by thunder and lightening. Jeff awoke just a second or two after I did and jumped up frantically shouting that we were dragging. He grabbed the GPS plotter and bounded up the companionway to assess the situation. In the cockpit, the rain pelted us hard and lightening struck around us. The winds had pushed us 170° from our drop point. Jeff started the engine to take some strain off the anchor line and make ready in case we needed to move. After a few moments, we breathed a sigh of relief as the GPS confirmed our anchor was still set. We waited out the worst of the storm, ready to jump into action if necessary. The Weather Channel showed another patch of red indicating a second round of heavy storms to come, so we laid down to catch a few winks before the action started again. Luckily the second storm never materialized, and we slept peacefully until morning, when at daybreak we realized just how fortunate we were.