We Put an Offer in on a Boat!

Though I was done looking at boats in Florida, the whirlwind trip was not over yet. My flight left out of Miami early the next morning, leaving me some time to catch up with a college buddy and meet his new girlfriend. After a nice dinner and a lot of conversation, I headed further south and spent the night at a really sketchy Motel 6 (so sketchy that a police officer was not only in the parking lot, but followed me to my room). With a 3:30 AM alarm, I easily returned the car and made my flight the following morning. Of course, that still left the drive back to Peoria from Chicago. Fortunately, everything went smoothly, and I was able to make it just in time to teach my afternoon class.

As you can imagine, by the time I got home from campus, I was exhausted. However, Margaret and I were anxious to talk about the Union 36 and explore our options. So, we sat down with my notes from the trip, our many spreadsheets, and Yachtworld to try to come to some decision about how to proceed.

We quickly put aside the Union 36. While Margaret’s initial concerns about the interior size of the boat were assuaged by the measurements and photos I took, along with my own impressions, the condition of the cabin put us both off. We continue to believe that particular Union 36 represents a good deal. But we also know what we want in a boat. Though we are willing to put a lot of work into whatever boat we buy, we do not enjoy – nor are we very good at – woodworking. So, we decided to move on from Benjamin Edward.

Now, we had to decide whether we would put an offer in on a boat we had only viewed on Yachtworld or whether we would wait for spring break and plan to inspect another dozen or more boats on the East Coast during that week. Personally, I was leaning towards putting an offer in sooner rather than later. I am not a huge fan of shopping in general. While I imagined getting on the boats over spring break would be fun and educational, the process of driving to each boat, coordinating schedules with brokers, and spending the money and time on travel did not appeal to me. Moreover, I was not certain we were really going to learn all that much more than we already knew about the used boat market and our own desires by looking at even more boats. Finally, the whole experience of looking for a future home – a home that is also going to safely carry us across oceans – was extremely stressful, and I preferred to move forward rather than draw out the entire process.

Margaret: While I agree that shopping can be stressful and unpleasant, I was not as anxious to get the process finished as Jeff. I looked at the experience as an opportunity to learn more about what I wanted, and what is available, in boats in our price range. Each time that I boarded a new boat I felt a bit more confident with my understanding of equipment, layout, and design elements. I had imagined a boat buying experience similar to my most recent car buying experience. I spent a week during the summer of 2010 test driving all of the mid-sized sedan under $30,000. My criteria included comfort, price, size, and reputation/resale value. I drove all over Rochester, meeting with dealers at over a half-dozen dealerships, for the better part of 5 days. In the end I felt like I knew all of the options that were available and was easily able to narrow down my selection. I also felt confident that I had found the best deal and that I would not spend any time in the future wondering “what if”?

As we have mentioned before, Margaret was particularly enamored with a lovely 1987 Tayana 37. From the many photos on Yachtworld, the boat appeared to be in excellent shape. It had newer sails, a pristine 2005 Yanmar, and fiberglass decks. Though the boat did not have a tremendous amount of offshore gear and its electronics were a bit dated, the navigation station was not crowded with useless old units and the wiring looked to be very nice. To be honest, I do not love the looks of a Tayana 37 as much as a Cabo Rico or even other Bob Perry designs like the Valiant 40. But there was no denying the shape this boat appeared to be in. She was priced well outside our budget, but she certainly looked to be the choice of all the listed boats in the designs we were interested in under 100 thousand. However, the biggest appeal of the boat, for me, was that Margaret thought she was beautiful with enough room below.

Margaret: When we decided to put the offer on Bear I had been aboard less than 20 sailboats in my entire life and I had only begun to think about what I would want on my own boat for the last year and a half. I had “known” cars since I started driving at 14 and had learned how to change my own oil, spark plugs, tires, brake pads, radiator, and thermostat. I wanted this sort of comfort level with the boat, but also knew that time was not on my side. Living in Illinois makes it challenging to get to places where bluewater boats are for sale, and while I didn’t mind the prospect of spending spring break boat shopping in the Chesapeake, I also liked Bear’s unique layout and knew that I felt comfortable with the size of the previous Tayana 37 we had looked at. And, I thought it would be much nicer to have a relaxing break mid-March rather than continuing the feverish pace we had had since the Fall semester began.

The images below are from the Yachtworld.com listing of Bear: 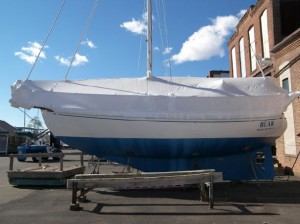 On the hard in CT 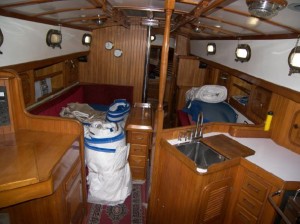 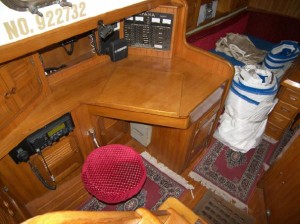 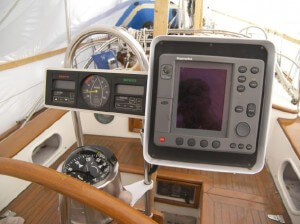 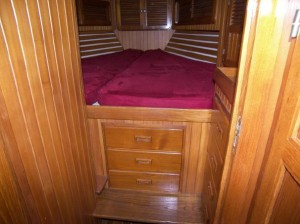 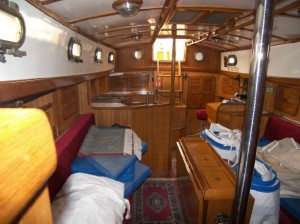 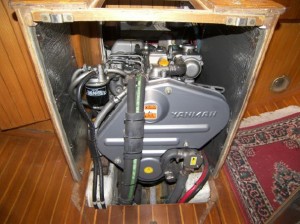 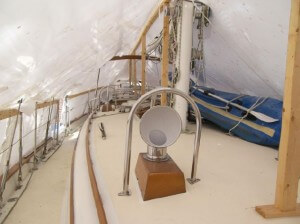 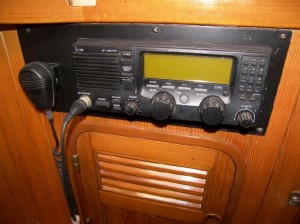 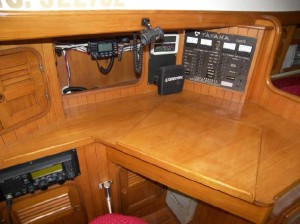 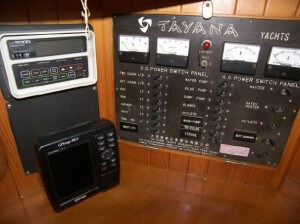 We started doing some deep Google searches to uncover additional information about Bear, the name of this particular Tayana 37. From various posts we found in the Tayana Owner’s Group newsletters and email forum, we learned that she was originally listed nearly a year before at 120,000. The fact that she had been on the market a long time gave us hope that a lower offer might be accepted at the same time we dispaired at the high initial list price. We also discovered that she appeared to have had a single owner, had suffered some damage in Hurricane Bob back in 1991, and had the original chainplates. We were not too concerned with the hurricane damage, as it sounded rather minor and had happened a long time before. The news about the chainplates did worry us a bit, as we began wondering what shape the rest of the rigging was in. But knowing that Bear had a caring, long-time owner was welcome information.

Eventually, over the course of the next two days, we came to the conclusion there was no harm in putting in a low offer that was both barely within our budget and, in our opinion, fair. Of course, the offer would be subject to survey and acceptance, so we would have a chance to learn quite a bit more about the condition of the boat before we were committed. Nervously, I called the broker late on Friday morning. Though Hal was a bit taken aback that I was calling with an offer, he was very pleasant and helpful. Hal asked me a dozen or so questions about our offer and explained the entire process we would be going through before actually asking me what our offer price was. I was a bit nervous as I spit out our significantly reduced offer, but Hal hardly seemed to bat an eye, merely commenting that it might be a little optimistic. He then told us he would be in touch as soon as he presented the offer and received a response from the owner. While we were initially a little giddy at having taken this step, any real exuberance at having put in an offer was tempered by our low expectations of success.

4 Responses to We Put an Offer in on a Boat!