As many of you know, the weather in Illinois has been awful this winter, and the weekend we put the offer in on Bear was no different. Temperatures were in the single digits and a pile of new snow blanketed Peoria. So, we did not have much to do beyond sitting by the fire, doing work, and speculating on what the outcome of our offer was going to be. 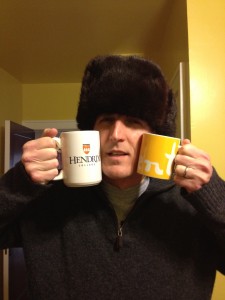 An excellent technique for warming yourself up…people will now be doing it in cafes across the land. 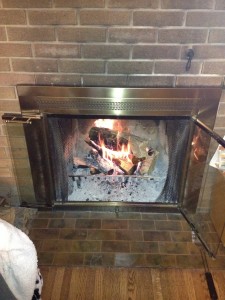 Initially, I thought we had about a 1% chance of the offer being accepted and perhaps a 20% chance that the owner would even deign to respond with a counteroffer. But as the hours passed by on Friday, I slowly gained a little more hope and confidence. Just about every hour, one of us would turn to the other – maybe I turned to Margaret a bit more frequently than she did to me – and ask what the current chances were. By Friday evening, I began to entertain the idea that we would end up owners of Bear, though I still put those chances at extremely slim.

Margaret: Since Jeff had been the one to talk to Hal, I had no sense of his tone when we made the offer. I have a tendency to base a lot on tone and body language, so I was missing these key components that would help me “determine our chances” of an accepted offer. I initially thought we had about a 30% chance of getting the boat, counter offer or not. It had been on the market for a year, had been listed before at a much higher price, and we were putting in an offer at the time of year that an owner might start to realize that the boat would sit for another summer.

By Saturday evening, my own odds topped out at about 10% for outright acceptance and 40% for a counteroffer. While a ton of time had elapsed, making it seem like the owner was actually weighing the decision, I also figured there was a distinct possibility that the owner was out of town and had either not seen the offer at all, or was not able to really think it over yet.

While we wondered and worried, we looked over the Yachtworld listing many times, examining Bear’s photos and equipment list. I wanted this deal to work, but I also figured it wasn’t the end of the world if our offer was rejected. We could continue to save and shop for boats – we were not in a time crunch to buy. I saw this as an advantage as a buyer. There was no pressure for us to buy except those self-imposed. I mentioned this to Jeff and we tried to relax, knowing that, at the very least, we would have learned something new about the boat buying experience from putting in our first offer.

We did not expect to hear much of anything on Sunday, but I still kept my phone at my side and anxiously checked my email. And, as night came on, we gave up any hope of hearing a response until the next day.

Monday passed in much the same way, though Margaret had to leave the comfort of the house to teach an afternoon class. While she was away, I was under strict instructions to give her a call if I received any word. But, she was home before my phone had so much as beeped.

By now, we had started to wonder what could possibly be taking so long. Maybe the owner was so insulted by our offer that he did not even bother responding to the broker. Was it possible the owner was considering our offer for this long? Of course, most probably, the owner was simply busy and not as consumed as we were with the outcome of this minor bit of drama.

I imagined that the owner and his wife were weighing the pros and cons of selling the boat at our low-ball price. It would mean that they would be relieved of insurance, storage fees, and upkeep, but that they would be getting far less from the boat than they hoped. Perhaps they didn’t need the money. Perhaps they did. Perhaps the boat had deep sentimental meaning to them that our low offer was not respecting. Perhaps they did not take our offer seriously because we had not yet been aboard. As you can imaging, the list of potential reasons for their “delayed” response became more creative by the moment.

Then, in the early evening on Monday, my phone lit up with a Connecticut number, and I quickly picked up the phone. Hal greeted me and exchanged pleasantries while I, and Margaret right next to me, waited for him to inform us of the owner’s response. Finally, after maybe a full fifteen seconds, he let us know that the owner had made a counteroffer seven thousand dollars above our initial offer. Hal also passed on the information that this was a firm offer; there would be no negotiation. And that left us to ponder what we should do.

2 Responses to Waiting and Wondering