I am excited and proud to announce that I have been awarded a 2014 Puffin Foundation grant to begin a new photographic series about women who sail and work on the water. The Puffin Foundation “supports artists and art organizations who are often excluded from mainstream opportunities due to their race, gender, or social philosophy”.

You can check out the Puffin Foundation here.

With the aid of Puffin Foundation funding I will document women captains, first-mates, and crew who are part of this customarily masculine tradition and intend to reference, through composition, style, and lighting, eighteenth and early nineteenth century paintings and photograph that captured men who planned voyages, conquered distant lands, and sought wealth and fame along the way.

The mid-20th century development of the cruising lifestyle stands in distinct contrast to previous maritime objectives such as land discovery and domination of foreign lands. Joshua Slocum is often credited with the first circumnavigation voyage for pleasure in the late 19th century, however the cruising lifestyle begins to gradually lure sailors between WWII and the 1970’s. Only in the past 25 years do we see women performing solo circumnavigations (Kay Cottee and Tania Abie were the earliest in the late 80’s). Jeanne Socrates recently (July 2012) became the oldest woman to circumnavigate at the age of 70. While I am more interested in the lifestyle of the live-aboard cruiser than the racing sailor, I am struck by the courage and tenacity that all of these women exhibit in their ability to unleash the ties to creature comforts and consumer culture and to live a life that is both adventurous and nomadic.

As a fine art photographer, and novice sailor, I am looking to combine my two passions in this photographic project. For examples of my work, please visit my website www.margaretlejeune.com. My recent series The Modern Day Diana has been exhibited in galleries and museums across the country as well as been featured on Slate.com and Actuphoto.com. 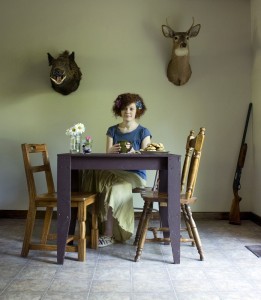 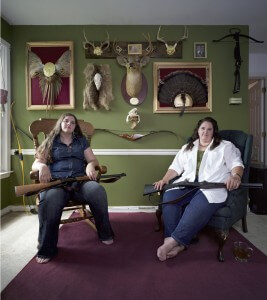 Robin and Rose from The Modern Day Diana series

I am currently looking for women who are available for shoots during the week of March 17-21 who live/work on the West Coast of Florida between Naples and St.Petersburg.

Chicago-based/lower Lake Michigan – April and May

If you are interested in participating in this project, please email me at margaretlejeune@gmail.com for more information.

3 Responses to Call for Women Sailors