While we were walking off the dock after looking at the Union 36, Joe, the broker, asked me if I would be interested in seeing a Contest 40 that he thought was in fabulous shape. I was unfamiliar with a Contest, but jumped at the opportunity to get aboard another boat.

The boat itself was in Indiantown, so we both got into our cars, and I followed Joe for the 45 minute drive inland. During the drive, I thought more about the Union 36 and the other, more expensive Yachtworld listings that we had been contemplating putting an offer in on. I was not sure what our course of action would be, but I did not feel comfortable enough with the condition of the Union to suggest going for that boat. It was beginning to look like we were either making a lower offer on a more expensive boat – probably that Tayana 37 that had caught Margaret’s eye – or waiting until spring break to check out more boats. That is, of course, unless this Contest turned out to be the perfect boat for us.

Pulling into Indiantown, we passed through the parking lot where both Caper and Cottonwood II stood on blocks and into the back, grassy yard. The long rows of boats stretched for a few hundred yards and, though, many of the yachts were in the water leaving empty spaces, there were a few dozen folks around diligently – or maybe not so diligently – working on their dreams. We parked and walked down a row just as the wind started to pick up and a bit of rain began to fall. At the end of the row stood the Contest 40. The Contest 40. Photo from Yachtworld.

Though I could tell from the ground that the boat was in excellent shape, I also knew immediately I was not interested in her. First off, it was ketch rigged. I understand that some people love the versatility of ketch rigs, but I think they crowd the cockpit on boats smaller than about 50 feet. Moreover, having a second mast means additional costs in rigging and sails. The second aspect of the Contest that turned me off was the rudder; it is only partially skeg hung, leaving a foot or two of the deepest part exposed. While the partial skeg would help distribute the load across more of the rudder (unlike a spade rudder where the rudder is only attached at the top) and the exposed portion is raked back to shed lines that might otherwise get entangled, even a partially unprotected rudder makes me nervous in the case of a grounding.

At this point, someone else might have just told Joe that he was not interested in the boat. But I wanted to get aboard and check out the rest of the boat, if only for an additional reference point for comparison. Perhaps sensing my disappointment, Joe encouraged me in this regard, saying that sometimes he finds looking at another boat – especially one as different from the Union and the Tayana as the Contest is – can help put a decision in perspective.

Up on deck, the boat was immaculate. Almost everything was nearly new and of good quality, like the Harken roller furling. I was not taking good notes on the boat, so I am mainly working from memory here. But I remember being incredibly impressed with the condition of the boat. It had clearly been loved by its previous owner, which Joe confirmed when he told me the boat’s story. Apparently, a father and son had owned her for a very long time, enjoying working on her together just as much as they enjoyed sailing her on their New England waters. As the father got older and passed ownership to the son, the son had more money than time and used it liberally to keep up with the rigorous maintenance schedule his father had established. In fact, the standing rigging had just been replaced in the past few weeks not because it really needed it, nor because it would help sell the boat, but just because the calendar said it was time to complete the work. 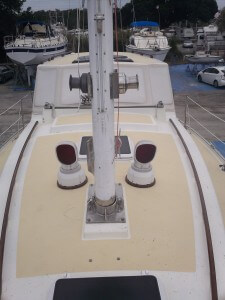 Despite the condition, I found other things that I disliked about the boat. The hard dodger, which was much nicer than the one on Cottonwood II, had only about 5’10” of standing room for my 6’1″ frame. The main cabin was rather small and sparse, more comparable to a 33 or 35 foot boat than a 40 footer. There was an aft cabin, but it was only accessible from the cockpit, had no headroom, and really offered nothing more than storage space or two berths and excellent access to the engine and steering quadrant. Looking into the aft cabin from the cockpit. 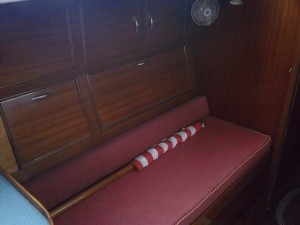 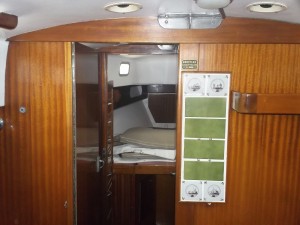 I have come to find out that Contest Yachts are based in the Netherlands and, consequently, hard to find in the US market. While this was definitely not the boat for us, it would be perfect for someone looking for a nice Contest here in the states. And, I see now that this Contest 40 is sale pending.

As I drove away from the yard, I realized Joe was right. Getting aboard the Contest did help clarify the decision we faced.