Two Tales of Inexperienced Boaters on the ICW

All sorts of people use the Intracoastal Waterway and, after a while, I began to realize that some of them were ill prepared for navigating the ditch, which really should not have been as much of a revelation as it was. As I will detail in the coming days, the varying skill and experience level of boaters makes it a bit difficult to trust all the crowdsourced information on ActiveCaptain, something that we came to fully appreciate as we made it further south. But today, I am going to share two encounters we had along the way that illustrate the lack of preparation, experience, and knowledge of some boaters on the ICW.

Beaufort, South Carolina is a lovely town located on a bend of the Beaufort River. Unlike the Beaufort in North Carolina, which is pronounced Bo-fort, the South Carolina variety is called Bew-furt. Regardless of the pronunciation, Beaufort, SC welcomes transients with an inexpensive marina, twenty mooring balls, plenty of room for anchoring, and inexpensive showers and laundry right on the waterfront. In order to get change for the laundry and pay for the showers, one needs to go into the ship’s store, which doubles as the marina office, where an older woman lords over the premises. Fortunately, she is a benevolent, if somewhat cranky, dictator.

Beaufort, SC, nestled in a bend of the eponymous river

While we were there, my Dad went into the store to get some additional quarters for the laundry. A couple stood in front of him at the counter, talking to the older woman. When the woman behind the counter mentioned high tide, the couple had no idea what she was talking about. With an immense amount of patience, the older woman explained tides and their accompanying current, suggesting that the couple might want to pick up a tide table or download a tide app for their phone. The couple was intrigued, saying they had noticed that the water level had gone up and down at times, but had no idea, until now, as to why that occurred. 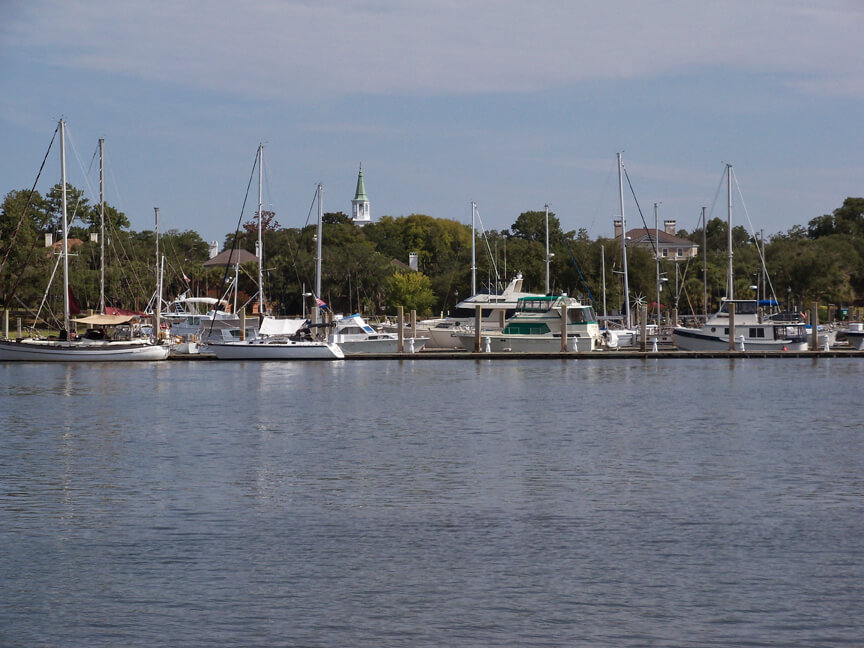 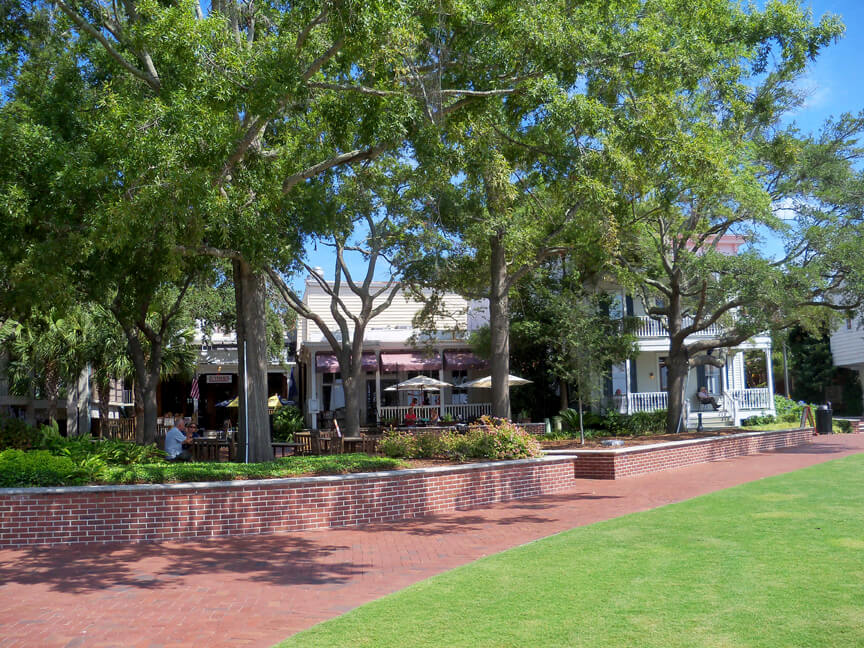 Some of the lovely waterfront in Beaufort

Now, for our uninitiated readers, tides are caused mainly by the gravitational pull of the moon on the earth’s waters, causing the water to rise (flood) and fall (ebb) to high and low tides about every six hours and fifteen minutes. Coastal geography, the seabed, winds, and other factors influence the height of the tide, causing it to rise and fall by dozens of feet in some places, most famously the Bay of Fundy, and barely at all in others, such as the Gulf of Mexico. As should be clear by some of my previous posts, tides are very important in South Carolina, where the tide range – the amount it rises and falls – can be as much as nine feet. Not only does that much water moving around every six hours cause strong tidal currents, but such a large tide range means that we could easily be transiting an area at high tide that, at low tide, would be dry mud.

As you can see – or probably already knew – tides are an important thing to understand if you are on the ICW and one whose effects would seem hard to miss. This couple in Beaufort had purchased a boat and made it at least some distance along the ICW without having any knowledge of the phenomenon. What’s more, they had barely even noticed that literally millions of gallons of water were coursing by them, in and out, multiple times every day.

During our last day on the ICW, we came across another cruiser who made us shake our head once again at the level of unpreparedness. We had spent much of the afternoon alone, enjoying the scenery as we came down the protected west side of Cumberland Island. But then we passed the heavy security patrolling the Naval Submarine Base Kings Bay, where many of the United States’ nuclear submarines are based, and into a strong opposing current and heavy wind on Cumberland Sound. In order to avoid the worst of the current, we plotted a straight-line course outside the channel to the mouth of the St. Mary’s River, where we were headed. 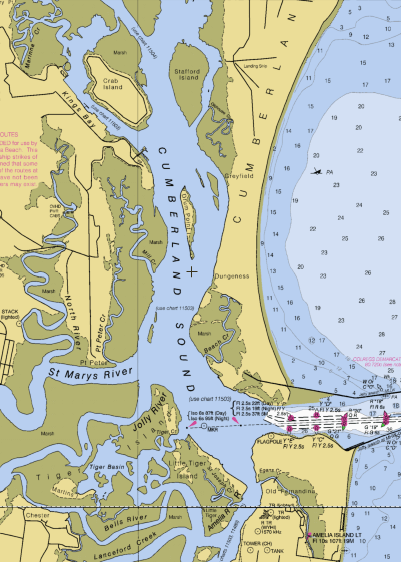 Cumberland Sound with Kings Bay in the upper right, the St. Mary’s River in the bottom left, and Amelia Island in the bottom right corner

A few moments after we left the ICW, an older cabin cruiser started following us. And, about ten minutes later, still right behind us, they hailed us on the VHF radio on channel 16. Channel 16 is for hailing and distress only, and, consequently, when I replied I expected them to ask me to switch to a different channel so we could converse, keeping 16 open for other traffic. Instead, the captain of the other vessel queried whether we were following the ICW. When I answered in the negative, he stated that “all these sounds and bays are so confusing,” and could we tell him where the ICW went. Concerned about still being on 16, I replied tersely that the ICW was to the east and that the markers had flipped when we entered the sound, meaning the greens were now on the right and the reds on the left. He thanked me profusely and rambled on for a while longer before finally ending contact when I failed to reply to his banter. 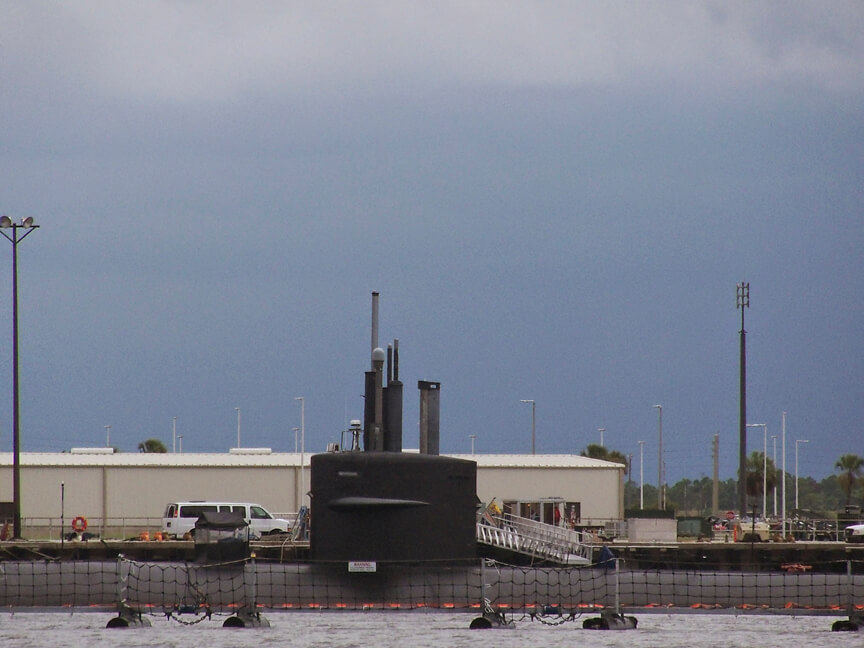 One of the submarines at Kings Bay

Apparently, this guy had no paper charts and no chartplotter aboard, or else he did not know how to use either of them. He also had little understanding of the basic conventions of navigational aids and radio protocol. I find it hard to imagine how his trip down the ICW had proceeded up until that point. Forget about getting from point A to point B everyday without mishap; I do not think he even knew where point A and point B would be. And did he just anchor wherever he was when the sun went down each night? These were the issues that my Dad and I pondered while we made our way to the St. Mary’s and kept an eye on a thunderstorm to our west.

As we made the turn into the St. Mary’s River, I scanned the ICW to our east for our friend and found him heading out the St. Mary’s Inlet to the ocean. There had been a little easterly jog in the ICW just before the inlet, but the ICW clearly – if one understood the markers – continued south inside Amelia Island past the inlet. I quickly hailed him on 16, had him switch over to another working channel, and then made certain he knew he was heading into the ocean. Unsurprisingly, he had no idea he would soon be out on the high seas. From two miles away, I tried to explain how he needed to turn around and find the markers – now, once again, red on the right and green on the left – heading south. He heartily thanked me and, before we lost sight of him, was happily on his way south in the ICW once again.

On one hand, the experiences – or lack of it – of the Beaufort couple and my cabin cruiser friend seems to suggest that it does not take a licensed captain or weathered old salt to make it down the ICW, just a bit of luck and blissful ignorance. On the other, it also makes me realize that many of the complaints and warnings about the ICW – shoaling here and there, missing or confusing channel markers, commercial shipping with no regard for the rules of the road, etc. – are probably, in many cases, promulgated by people who have no idea what they are talking about. Tomorrow, I will go into a bit more detail about how we tried to separate the warnings on ActiveCaptain about real navigational hazards from those that stemmed from seamanship errors.

2 Responses to Two Tales of Inexperienced Boaters on the ICW