False Gods along the ICW: Fetishizing ActiveCaptain and the Magenta Line

Heading south, each evening I would go over the ground we were to cover the following day on ActiveCaptain and make notes on each hazard we might encounter. Most days, the crowdsourced information on ActiveCaptain indicated there were about a dozen areas of shoaling that we needed to be wary of. Much of the advice on the site suggested favoring one side of the channel or another while passing through the problem areas. The next day, I dutifully waited for each troublesome section and carefully stayed off to the supposedly deeper side. Continuing down the Intracoastal Waterway in this manner, we never had a problem.

While we always found sufficient water, I began to wonder whether some of these spots where people had run aground and then reported it to ActiveCaptain were really in the channel at all. Oftentimes, the supposed shoaling areas were in sections with stiff current that could have pushed people out of the channel if they were not paying attention to both the markers ahead and behind. In the case of others, the shoaling was reported on the inside of a sweeping bend in the channel. With the strong tidal currents, the waterways act a lot like rivers, albeit ones that switch direction every six hours; the current gouges out a channel on the outside of bends and deposits silt on the inside of the same turns where the current is more slack. Someone who was just transiting in straight lines from one marker to the next without paying attention to the natural curves of the creek or river the ICW was in might cut right over one of these inside bars.

As we proceeded further down into South Carolina and then Georgia, I seemed to find more circumstantial evidence supporting my suspicions that not all the hazards noted in ActiveCaptain were actually something a conscientious boater needed to concern themselves with. However, I did not find any truly hard evidence until our very last day, as we transited St. Andrew Sound between Jekyll and Cumberland Islands in Georgia.

Earlier that day, we had left the Frederica River just off St. Simons Island. As we made our way into and through Jekyll Creek, we encountered some readings in the low seven feet range shortly after low tide. Having shrimp boats with their booms extended out on either side taking up a good deal of the channel, we had to slowly creep south to Jekyll Island Bridge. 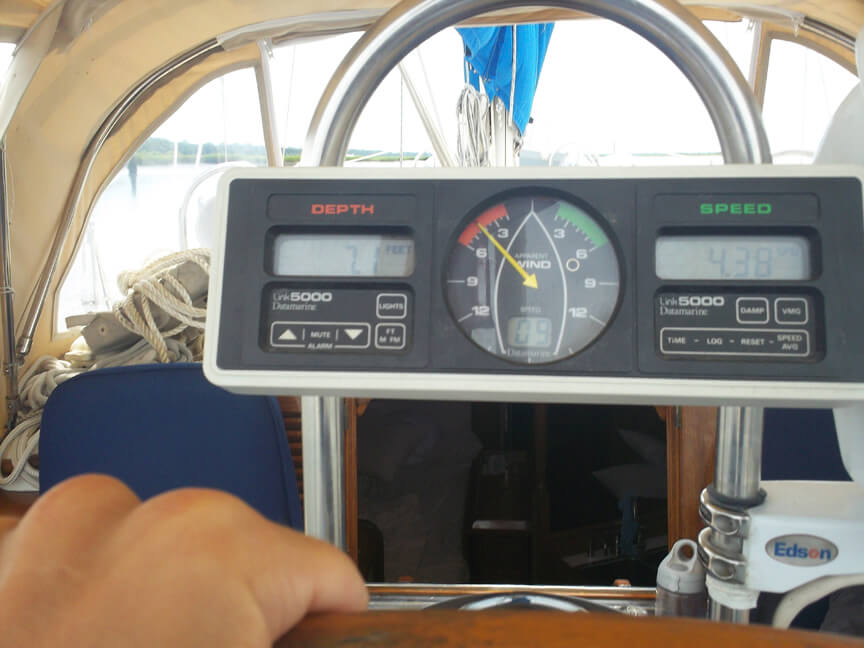 Some low water – 7.1 feet on the depth sounder – in Jekyll Creek

Seeing as how we had barely made it through that part of the ICW, I became a bit more nervous about St. Andrews Sound, which had promised to be difficult. On ActiveCaptain, the northern half of the sound was littered with shoaling hazard markers, indicating Horseshoe Shoal to the west was extending towards the ocean and that the shallow areas to the east of the channel were encroaching further in. But the most troublesome part seemed to be around red marker “32,” which we would round right before passing into much deeper water. Numerous people had revealed they had trouble finding sufficient water in this area. Since it was at the furthest point seaward in the channel and we would be passing within an hour and a half of low tide, I worried that we might run aground and then be bounced around by wave action from the ocean. 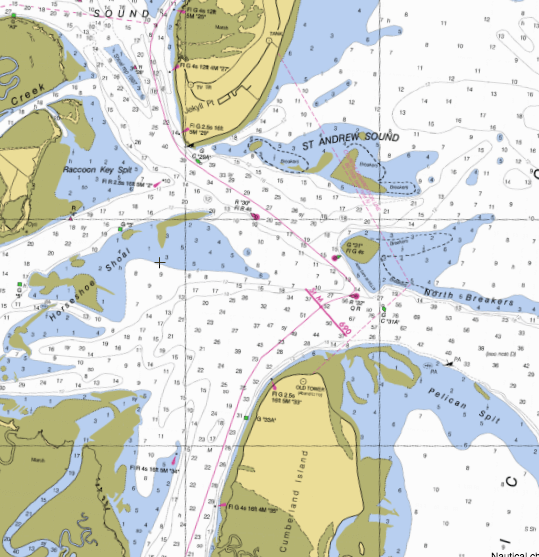 While baitfish and shrimp schooled around us in immense numbers and dolphins, seabirds, and shrimp boats all circled them, we carefully made our way out into the sound. More vigilant than ever, I was constantly checking my chart and using the binoculars to locate the various channel markers and ensure we were still in the channel with the strong flood current pushing us westerly. Perhaps because of this attentiveness, I never saw anything less than twenty feet until we reached the charted fifteen feet near G “31,” despite it being close to low tide. As we neared R “32” and the swells got a little heavier, the depth sounder started showing readings just over ten feet. However, within a few moments, we rounded the marker and were safely, and suddenly, in fifty feet of water. 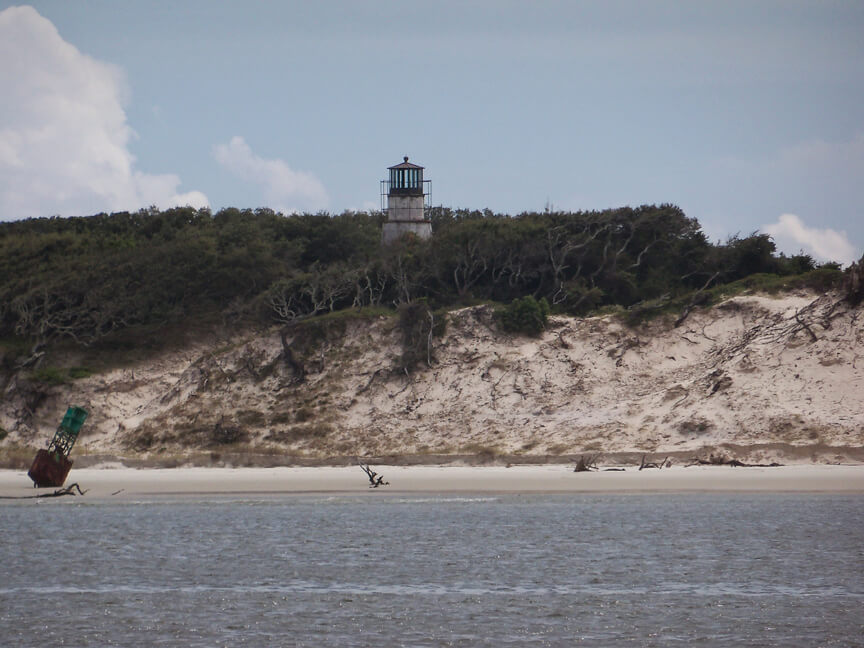 As we began what was a beautiful trip around the inside of Cumberland Island, I read the comments about the shoaling at R “32.” Looking again, it became apparent that many of the people who had problems noted that they passed to the west of “32.” So, the reason they found only five to seven feet of water in this section was because they were actually outside the channel. And why did they go outside the channel? Because, as many of them stated, presumably proud of their seamanship, they were following the “magenta line.” I am not sure why anyone would blindly follow the magenta line noted on the charts – and if you look here, the magenta line actually goes west of R “32,” outside the channel – rather than read the water and honor the actual marks, but that is the blind faith that people put in their chartplotters and paper charts. 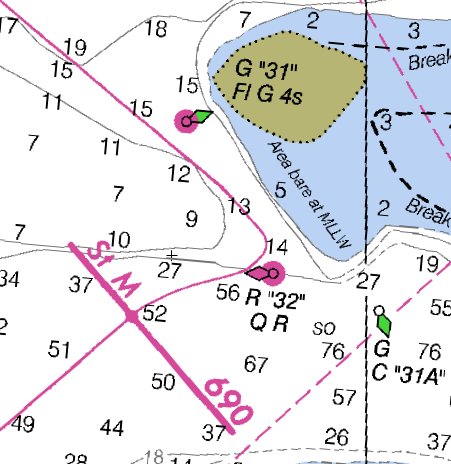 The magenta line passing outside the channel in St. Andrews Sound

The magenta line itself is created by the US Coast Survey. However, the Coast Survey have noted problems with it and even began removing it from some ICW charts. Even if there were no systemic problems with the magenta line, I would treat it like anything else found on a chart, knowing there is always the possibility of human error in its creation or the chance that actual conditions have changed since the chart was made. As I noted in my first post about navigating the ICW, I think charts and chartplotters are useful, but they are some of the last – and least reliable – resources that I turn to when navigating. And, even after confirming that some of the hazards on ActiveCaptain are not actually in the channel, I still think the site is an incredible resource. I would rather be transiting areas with heightened caution because of an erroneous comment on ActiveCaptain than run aground because I had not heeded the advice found there. Of course, like any single resource, ActiveCaptain should not be taken as gospel, even though – or perhaps exactly because – it is crowdsourced.

3 Responses to False Gods along the ICW: Fetishizing ActiveCaptain and the Magenta Line