While coming down the ICW, we encountered wharf roaches and a hatch of midges, but by far the worst small annoying living thing we had to deal with were the no-see-ums. Margaret and I had a minor run in with them one night in the Chesapeake when we anchored in Onancock Creek on Virginia’s eastern shore. However, that experience paled in comparison to what Tim and I endured further south in North Carolina. And, if I had not purchased some no-see-um netting in the interim, my Dad and I would have been ravaged by them as well as we made our way through South Carolina and Georgia.

Margaret and I anchored up in Onancock after hopping south from Crisfield, trying to shorten our trip across the bay to Deltaville the next day. We were enjoying the evening on the bow when some bugs started to bother us. As with other nights when mosquitoes came out, we simply moved below, put the screen in the companionway, and, before long, got into the v-berth. Sometime in the night, we both awakened to the short, intense and repeated pain of being bitten. After realizing they were no-see-ums that had easily penetrated our wider screens, we began a long restless night. What was worse was that the no-see-ums did not simply disappear the next day when we got underway; a few of them hung around in the cabin for our first couple nights in Deltaville as well. 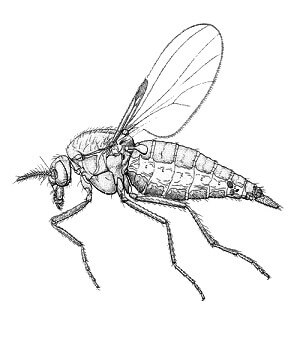 The bastard no-see-um, or biting midges

By the time Tim and I had made it to Beaufort, North Carolina, the painful memories of Onancock had faded. But they quickly resurfaced when I was awakened in the middle of our first night at anchor by the dastardly little insects. The next night, it was as if the ones who had feasted on me the previous evening had spread the word about the buffet on Bear; the attack came earlier – and thus lasted longer – and was far more intense. After realizing that bug spray provided no deterrent, I tried everything from moving into the cockpit, where I thought the additional airflow might keep them at bay, to pulling the sheet over my head, only to be overwhelmed by the heat. Even Tim, who had blissfully slept through the previous night on the port settee with a sheet up to his neck and a fan blowing on his face, felt the wrath of the no-see-ums that night.

When morning finally dawned, we got underway quickly, wanting to leave the horrid insects behind. And, by the time we had exited Taylor Creek and were working our way back to the ICW, the no-see-ums were no longer chomping at our legs. As we motored south that day, I spent some time below spraying vinegar on the cabin sides and wiping it down, which seemed to get rid of the bulk of the no-see-ums who were still in the cabin. We also did a bit of research on these little scoundrels, discovering that no-see-ums needed a blood meal in order to reproduce. So, with each painful bite, we were enabling the next generation of bastards to come forth. We also found that while most everyone on the internet seemed to agree that the only way to keep no-see-ums at bay was with netting, there were a few people who claimed having some success with Avon Skin-So-Soft or mineral oil, the latter of which we had on board. 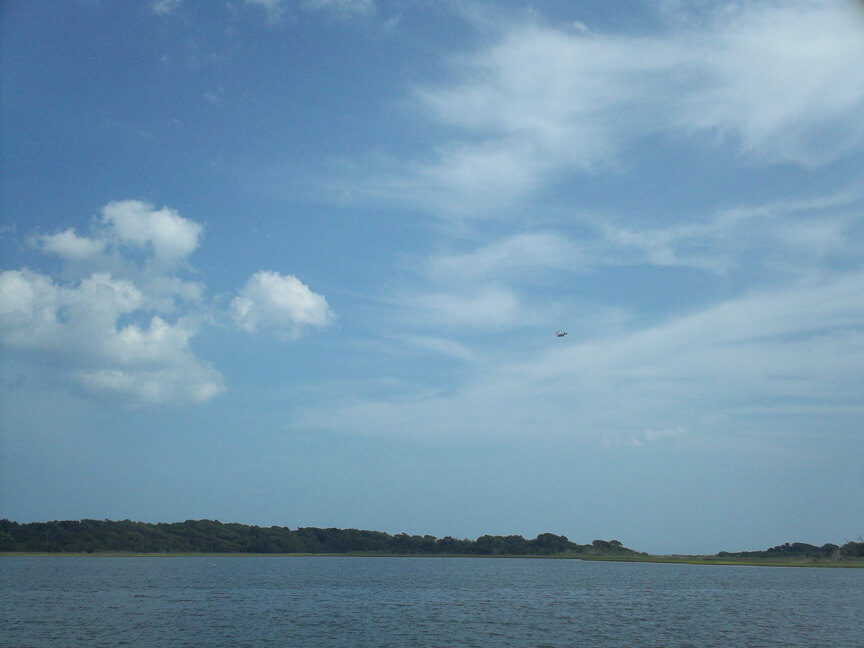 Mile Hammock Bay – note the Marine Osprey flying, which was incapable of defending us from the no-see-ums

It did not take long before we had an opportunity to try out the mineral oil. That night, while at anchor in Camp Lejeune’s Mile Hammock Bay, we were just destroyed by no-see-ums. And, although the mineral oil might have slightly restrained the attack, it did not seem like it did anything other than coat the sheets in messy slime. For five or six hours, all we could do was choose between extreme heat under the sheets or constant bites from the no-see-ums. Over a month later, I still have visceral memories of the overwhelming helplessness I felt, which was even worse than the torment of the combined heat and biting. I would not be surprised if Tim, whose legs were covered in bites that swelled and itched incessantly – far more than mine – over the following days, is probably still dealing with the physical effects. 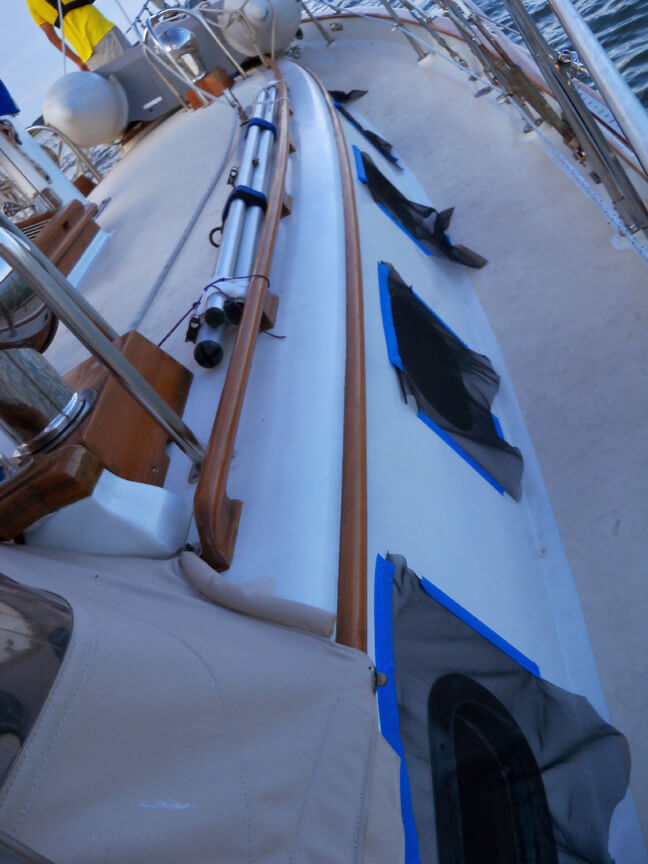 The screens were ugly and a pain to setup each night, but they were effective

The next day in Wrightsville Beach, which was thankfully free of insects, I ordered four packages of no-see-um netting

from Amazon. I figured I could cut up two of the sheets to cover the ports, hatches, and companionway and still have two left over to place over ourselves should the bugs find a way through those defenses. When my Dad arrived, replacing Tim as crew for the rest of the trip south, the first thing we did was cut the screens to size. Nearly every night of the rest of the voyage, we taped the screens onto the hatches and carefully covered the companionway when we went below for the evening. While it is hard to tell how badly we would have been attacked without the screens, it was clear they were keeping the no-see-ums at bay. On more than one occasion, I went above and got assaulted by the insects while there was nary a single one below. Margaret and I are already planning on sewing some covers for the hatches with the same netting, putting elastic around the outside so that it will be easier to set up when we anchor next summer. I highly recommend that every boat venturing anywhere with the possibility of no-see-ums get some sort of netting to protect yourself. It will be the best ten bucks you ever spent. 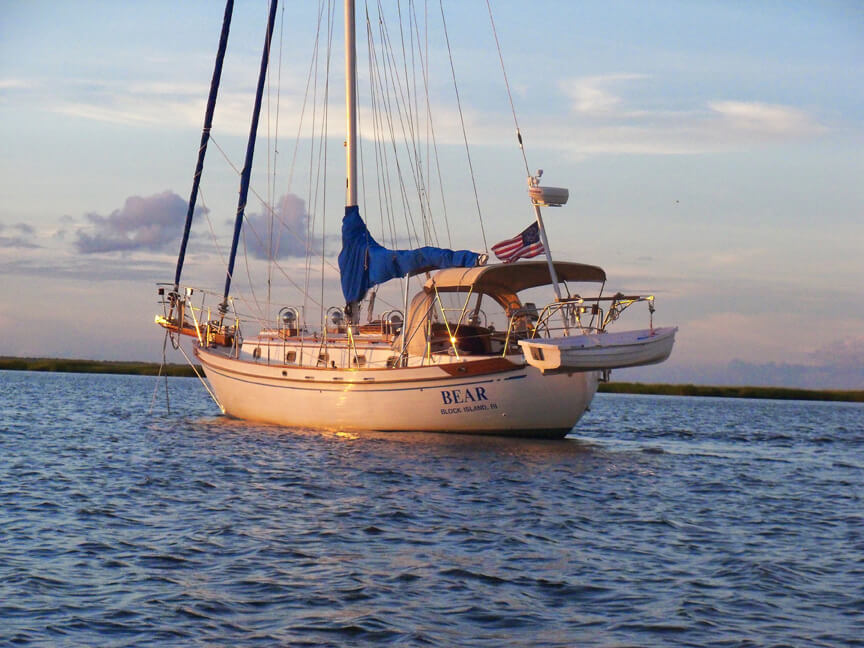 Bear at anchor off St. Simons Island, one of the few nights we did not put up the netting

Edit: For our trip back up the ICW in 2015, Margaret made no-see-um screens for the ports that worked perfectly and did not involve using a ton of tape every night. You can see her video on making them here and a video on their installation here.

This entry was posted in Home Page and tagged icw. Bookmark the permalink.