Getting Bear Ready for Hibernation: How We Winterized Our Boat

Before we even had the boat hauled out of the water, we began winterizing her systems. While we were anchored off in St. Mary’s, I changed the lube oil, the oil filter, and the transmission gear oil. Since there are contaminants suspended in the oil that will eat away at the engine if left over the winter, it is important for us to put Bear away with a new, clean load of oil. In fact, because the lube oil was still somewhat dirty after the first oil change, I changed it a second time. 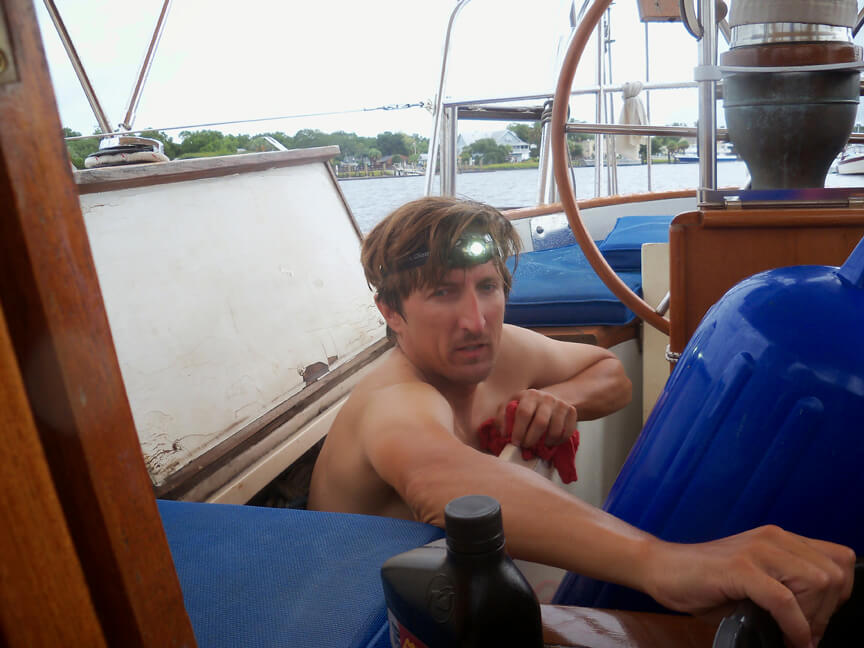 Changing the transmission oil is a tough job, solely because the tranny is located in the most inconvenient of places

After we pulled the boat, however, the real work began. We did not get much of anything done immediately after Bear was in the slings because the sun was already setting. Still, I spent some time carefully going over the underside of the boat. Given that every time I dove on the boat to clean the prop and hull I found a lot of growth, I was surprised that there was not a load of barnacles and weed in places I had not managed to clean all summer. I also noted that the sacrificial anode around the propeller shaft was nearly eaten away. Strangely, all of the other zincs were in good shape. 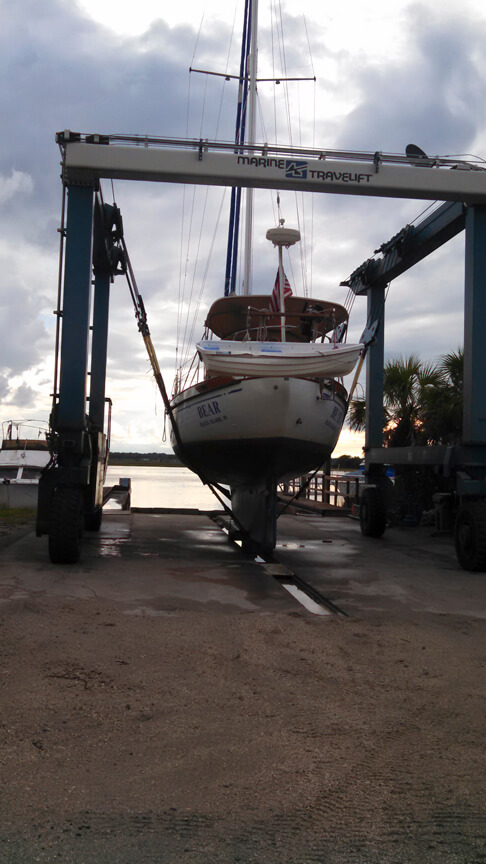 Bear in the slings

The final surprise, and it was not a very good one, underneath was the condition of the rudder. In the spring, our surveyor noted that the rudder straps – the metal which holds the rudder to the rudder stock and should be glassed inside the rudder – were slightly visible, indicating that they were separating from the fiberglass. This could allow water intrusion into the rudder, weakening the fiberglass and causing corrosion of the metal straps. He mentioned it was not anything serious at the moment, but that we should keep an eye on it in the coming years. Looking at it fresh from the water, it looked far worse. The rudder straps were further out of the fiberglass, water weeped from the space between the straps and the fiberglass, and there were small sections around the straps that felt soft. We will have to address the issue in some way over the winter.

The next morning, my folks and I returned to the boat, spending most of the morning just removing gear, electronics, clothing, and other material that we did not want to leave on the boat where it could accumulate mildew and corrosion. Finally, with just about everything off, we began the hard task of cleaning the insides in an attempt to forestall the growth of mold when the boat is closed up over the winter. My folks did most of the work here while I attended to other tasks; without their help, it would have taken me at least another couple days to get Bear ready for hibernation. They started by washing every surface, including in the lockers and the bilge, with a mixture of half vinegar and half water. After that dried, they followed up with a spritz and spread of tea tree oil. We began using Forespar’s Tea Tree Oil

, but, when we ran out and would have had to drive an hour to get more, shifted to making our own. Taking the concentrated tea tree oil

they sell in the pharmaceutical section, we made our own spray, mixing two teaspoons with 16 ounces of water. While tea tree oil smells pleasant in small doses, we quickly came to detest the smell as it permeated our clothing and seemed to lodge in our nostrils. 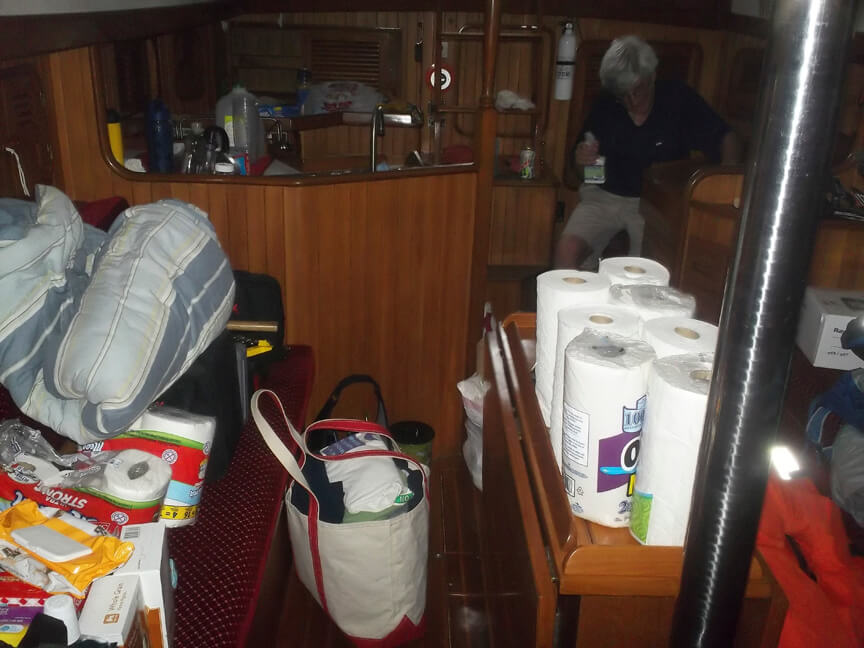 Getting the gear off with Dad in the back cleaning

While my folks were cleaning below decks, I put the anchor and all 200 feet of chain on the ground and thoroughly washed it. I then also rinsed out the anchor locker. If you do this on your own boat, make sure to turn off the hose when you are done. I accidently turned the hose up rather than off, then spent a good deal of time using the manual bilge pump to empty the nearly full bilges. We also ran a box fan, pointed into the bilge, for the next 36 hours, drying out the last of the moisture. 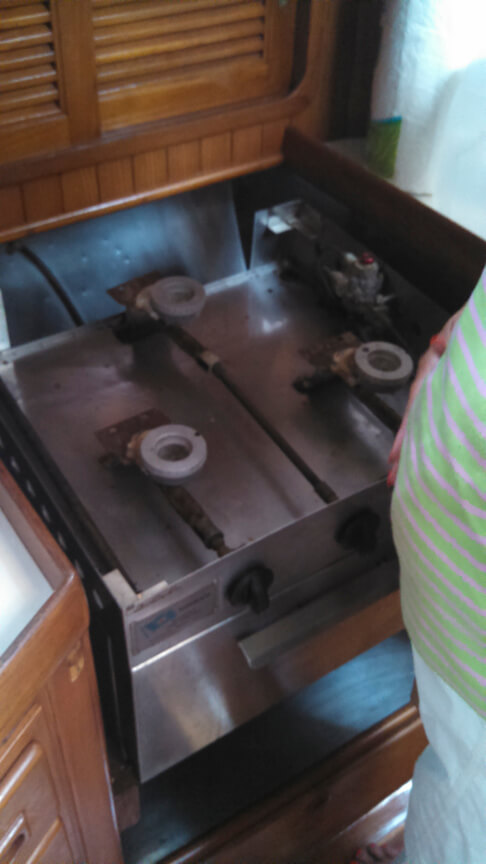 Now clean, the area below the stovetop was disgusting

Of course, we took the bimini and dodger off, along with all the sails. Because the boatyard was unpaved and the dirt was wet from rain, we brought the sails to our hotel parking lot to fold, carefully avoiding dragging the sails across the pavement, which can chafe the stitching. I also took nearly all the lines off the boat, leaving only the internal halyards and one furling line, which we intend to replace next spring, on the topsides. We rinsed all the lines in fresh water and hung them out to dry. Unfortunately, we did not have enough sun, so they never fully dried. Rather than leaving them on the boat to grow mold and mildew, my folks kindly took them back to Florida to fully dry and store over the winter.

Next, I started to winterize the systems on the boat, which mainly involved a lot of RV/Marine antifreeze. Using the pink, RV/Marine antifreeze is really important because it is made of propylene glycol, which is far more environmentally friendly than typical antifreeze made of ethylene glycol. Just as importantly, propylene glycol is considered non-toxic, so it is safe to use in our freshwater system. After emptying the water tanks, I poured a few gallons of the antifreeze into both tanks. Then, I turned on each of our freshwater faucets – galley sink, head sink, and shower – until pink liquid flowed out. Next, I disconnected the raw water hose from the seacock, put the hose into the gallon jug of antifreeze, and pumped each of our raw water systems – bow and stern washdown, head, and refrigerator – until pink liquid came out of them too. I also poured two gallons of antifreeze into bilge and ran it through the bilge pumps. 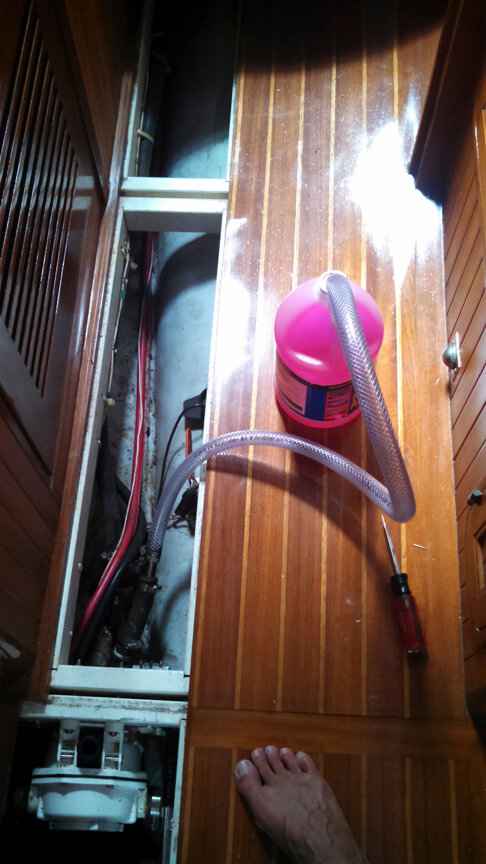 After closing up the cabin, I rinsed off the topsides with fresh water, making sure I hosed off all the salt on all the metal fittings, winches, rigging, etc. I followed this up by spraying everything metal on the topsides with WD40. And, then, we sadly left Bear in the yard until Margaret and I return in December.

There were three things that, because of time and circumstance, I was unable to do myself: top off the diesel to prevent condensation, get a final pumpout and then run antifreeze through the head into the holding tank, and drain the raw water system on the engine. Of course, I would have stuck around until these things were done, but Rocky, the yard manager, and Bob, a highly recommended mechanic, are going to take care of these for us. It still makes me a bit nervous leaving some things for others to do, but we were, largely because of financial reasons, in a hurry to get the boat away so that I could return to Peoria. Hopefully in future years we will be able to take the time to do everything ourselves and do it in a little less rushed fashion.

I should also mention that I took our small outboard, autopilot linear drive unit, and one backup water pump to Peoria with me. I will be winterizing the outboard today or tomorrow (with a video to come) and plan to take apart and repair the autopilot and water pump over the winter. In addition, we took the v-berth and cockpit cushions off the boat. My Mom carefully measured the inside foam and then through it away, saving the covers. Margaret will be sewing all new cushions this winter and replacing the foam inside. 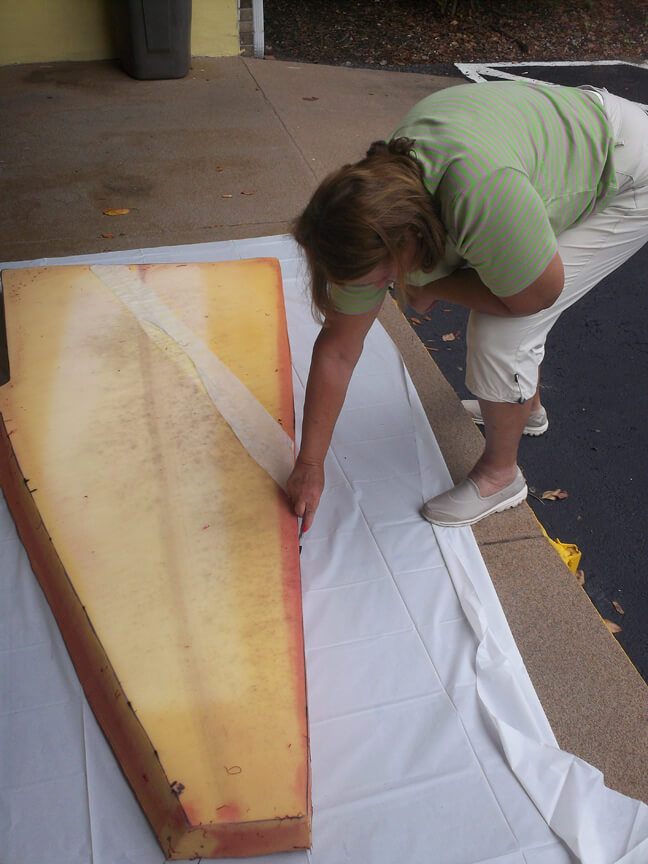 Thanks so much Mom and Dad for all your help!