The Trials and Delectations of Charleston: Anchoring and Oysters

Coming into Charleston, South Carolina by boat was something that I have dreamed of doing for a while. Over the years, I have had some fun times in the city with my folks, a few drunken nights with buddies and all by myself, and some long days of doing research there. Like most people, the food, architecture, history, and waterfront has drawn me in. But while I have explored each of them, I know I have only skimmed the surface and want to engage the place in a more sustained fashion. Moreover, it is hard to get the feel of any place, to really start to know how people actually live there, by coming into it for only a day or two at a time. What I really want to do is insinuate myself into the community a bit by living aboard and leisurely taking in the city over a couple weeks.

With my history in Charleston, working our way across the harbor was pretty special. Fort Sumter stood in relief off to our left while the iconic Arthur Ravenel, Jr. Bridge marked the sky far off to starboard. At the same time, the battery and the city spread out behind it slowly grew as we made our way across the harbor. And crossing the open water was a bit of a challenge. The wind had piped up and there was an immense amount of traffic, with some shrimp boats working near the mouth, a container ship making its way towards the Cooper River, a cruise ship just off the city, a sailing race getting underway, boats fishing everywhere (and one, having caught a shark, posing with it), and your regular Labor Day chaos, every conceivable craft churning in all possible directions.

A bulk carrier and shrimp boat in Charleston Harbor

Unfortunately, the satisfaction and enjoyment of arriving in Charleston was cut short when we approached the only real anchorages with dinghy access to the city, on either side of the Ashley River, just off the Charleston City Marina. Both spots have their issues. The one on the far side of the river, though larger with depths only in the teens, is more open to the wind and reportedly has obstructions strewn about the floor that occasionally swallow anchors. Not willing to endanger our new, precious Rocna, I had already decided we would try to anchor on the other side of the river, in the area bounded by the Coast Guard base, red nun “4,” and the City Marina. However, much of this anchorage is in deeper water, with charted depths in the mid-twenties, which meant that our depthsounder was showing in the low thirties as we came through at high tide. The deep water meant that we would have to put out lots of chain, causing us to swing through a wide area on the tide change. This would not be a problem except that there were four derelict boats perfectly spaced throughout the anchorage on moorings of unknown length and type along with the Coast Guard dock, channel marker, and approach to the marina to stay clear of. To make matters even worse, the wind was coming out of the southeast with a fetch of a couple miles across the entire harbor. 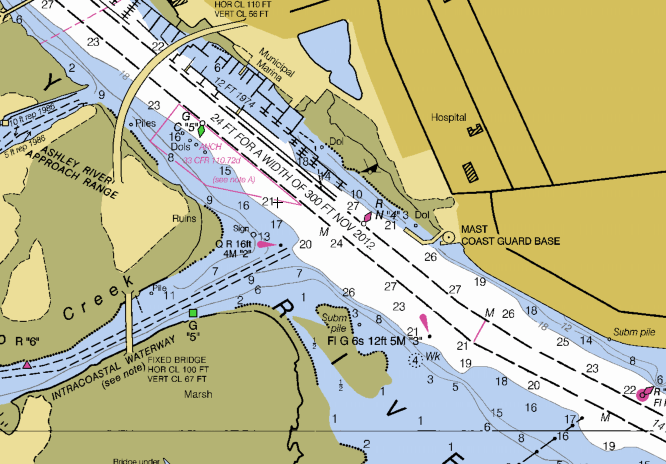 The City Marina, Coast Guard station, and two anchorages along the Ashley River in Charleston.

After circling the anchorage a few times, weighing our options, and even getting ready to drop the hook once, I finally decided to call the City Marina and see about a berth for the night. I really hate the idea of paying for dockage, so much so that this would be the only time in four months aboard that we would be doing so. However, my Dad had already, over at least the past twenty-four hours, offered, suggested, hinted, and otherwise made it clear that he would not mind at all if we came into the marina and, what’s more, that he would pay for it. Despite it being Labor Day Weekend, the City Marina had lots of space, and we quickly got out the fenders and lines. Almost like the marina was getting me back for my disdain, docking involved a final bit of drama on top of an already stressful day. Though the dockhands had indicated the tide was slack over the radio – and it appeared to be as we circled out front getting ready – it was flowing out in earnest by the time we came alongside. After a failed first attempt, we came around for another try, this time securing the critical stern line before the current swung us off the dock.

Dad made me take this picture so he could get the yacht in the background.

The marina was nice enough, with clean showers, new floating docks, and a shuttle to ferry us about the city. But I also had the feeling throughout our stay that we were merely being tolerated rather than welcomed by some of the staff who, perhaps, thought the “MegaDock,” which they incessantly trumpet, should really only be used by true yachts. And there were more than a few of these there, staffed with uniformed crew who tended to every detail and officiously ignored us while my crew ogled their boats and scoured the internet for any information on their length, cost, and amenities. I found the whole experience a bit distasteful and was happy to cast off the lines the next morning. However, none of this stopped us from enjoying some of the city, and the marina’s showers, in the meantime.

Bear, happy enough tied up at the MegaDock

Unsurprisingly, the next time we come into Charleston, I will definitely anchor out. Upon further reflection, I think I could have come further inside at the Coast Guard station anchorage, into depths of only 10-15 feet, and found a suitable place with enough swing room. Alternatively, the anchorage across the way certainly looked viable as well. There were at least a dozen boats anchored up there, including a few that came and went while we were at the dock, and I doubt they snagged their anchors on anything. I imagine that with a little more local knowledge we could avoid endangering our anchor. From there, we could come into the City Marina by dinghy and tie up for five dollars. While that does not include access to the shuttle, one could, if they were sufficiently unscrupulous, use it as the driver was gregarious, helpful, and never made any intimation of checking whether we were actually tied up at the marina. Moreover, there is public transportation close by and the lovely streets of Charleston encourage walking.

Shortly after we showered, we made use of the shuttle in a search for oysters. Our first stop was, by recommendation of the driver, who was a student at the College of Charleston, 167 Raw on East Bay Street. The place had an awesome atmosphere, with a few seats overlooking the small kitchen with a fish market lining the other wall. The interior was so intimate that the chef chatted with customers while practically having them help make the food. They had a small, but well-chosen beer and food menu including lobster rolls, poke, and tacos, all of which we should have sampled. But we got a dozen oysters – four each of three different varieties – and proceeded to slurp pure bliss. They were plump, succulent, and expertly shucked, leaving the shells brimming with the oyster’s juices. Seriously, these were close to the best oysters I have ever tasted. The only problem was the price, some twenty-seven dollars. I am sure it is the kind of restaurant that I would not be able to get out of without spending a hundred, but that probably says more about how good their food is – and how I would want to sample it all – considering everything else on the small menu is reasonably priced.

The heavenly oysters from 167 Raw

We continued to walk down East Bay, looking for a dozen more reasonably priced, and hopefully just as good, oysters. After passing by a few completely touristy places near the market, we hopped into Amen Street, which, compared to the other establishments we saw, is only a very touristy restaurant. They had oysters for fourteen dollars a dozen, and we promptly ordered a plate each. We also decided to go ahead and order some more substantial lunch despite our initial plan to fill up on shellfish. The oysters turned out to be awful while the food was quite tasty, especially the grilled shrimp and crab cake sandwich with brie.

Sufficiently filled, but still craving another good dozen, we left Amen in search of the oyster bar that my Dad and I had eaten at once or twice a day the only other time we were in Charleston together, some four or five years before. We found it, Pearlz, just a few blocks further down East Bay. We sidled up to the bar and ordered some beers and another dozen. The neighboring restaurant had had an electrical fire earlier in the day, which had temporarily closed Pearlz and left the smell of burnt rubber in the air. It turned out to be nothing that a few frosty beverages and another very good, reasonably priced plate of oysters could not allay.

Since we needed to get back to the marina before the shuttle stopped running at 7pm, we prematurely ended our oyster crawl, did some shopping at the Harris Teeter supermarket, and headed back to Bear. We finished off the night by catching a little more football, listening to a strange group of characters, and having a few more beers at the bar on the edge of the marina grounds, Salty Mike’s. Eventually, we walked back out to the MegaDock in the dark and got to sleep, resting up for another long day on the water.

I still have not fulfilled my dream of spending a few weeks in Charleston on a boat. And, I am not quite sure it is really possible to do so comfortably while anchored out in the city. Skipper Bob’s Anchorages book cryptically says about Charleston, “wonderful city to visit, unfortunately isn’t.” While I still hope that those two anchorages would work out, I am going to make sure I check them out for a night or two before I commit to a longer stay. But, in the meantime, Charleston will still be beckoning in my mind.