Another Navigational Challenge on the ICW: The Ashepoo Coosaw Cutoff

Leaving Charleston, we knew we had several areas of low water that we needed to be alert for. Since high tide was conveniently in the middle of the day, we imagined we would have no difficulties navigating the bulk of the shoaling we would encounter. However, just over forty miles from Charleston, which we would be reaching nearing mid-tide on the ebb, was a series of difficult areas in what was known as the Ashepoo Coosaw Cutoff, connecting the Ashepoo and Coosaw Rivers. Since going aground on a falling tide would mean we would be stuck for six hours or so, we decided to avoid the area altogether by heading down the Ashepoo into St. Helena Sound and then up the Coosaw to reconnect with the Intracoastal Waterway. On the charts, this path seemed to add about five miles to the trip, but would have us in deep water the entire way. But things did not quite turn out that way. 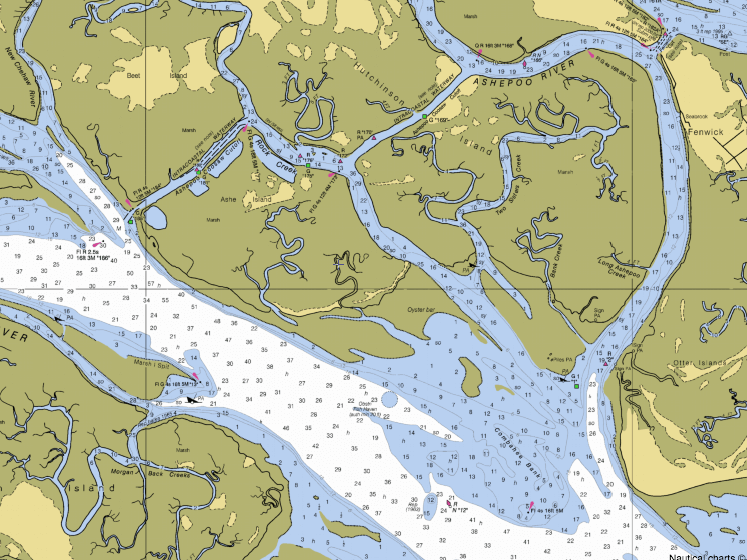 The Ashepoo Coosaw Cutoff and our route down the Ashepoo and around the Combahee Bank in St. Helena Sound

Somewhere along the Stono River earlier in the day

By the time we were heading down the South Edisto River and approaching Fenwick Cut, it was after three o’clock and the tide was coursing out at full strength. Momentarily entering the slack water of Fenwick Cut, we easily passed through this short body of water and entered the Ashepoo River. Instead of making the right turn and heading against the current on the ICW, we turned to port out of Fenwick Cut and road the current down the largely unmarked lower portion of the river. As we passed the R “2” and G “1” buoys, we continued to stay parallel to the Otter Island shoreline where dozens of boats were anchored up enjoying the beach. 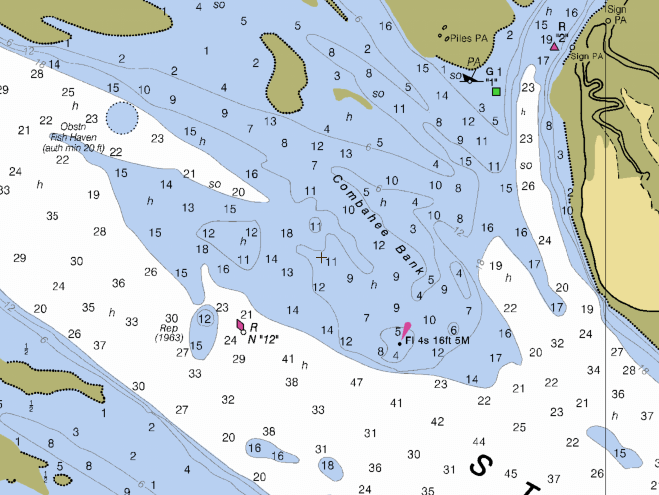 When we thought the charted finger of 16-17 foot depths was alongside, we made a sixty degree or so turn towards the west, to pass far off and around the flashing mark at the southern end of Combahee Bank. Almost immediately, the depth sounder started to fall, reaching into the single digits. After re-checking the chartplotter below, confirming that we were where we thought we were on the chart, we ended up turning 180 degrees around and retracing our path. Then, with a close eye on the depthsounder and the chartplotter, we headed a good deal further out St. Helena Sound, standing far off the bank. The depths never approached what was charted. Where the chart showed 20 feet, we saw 10; where it said 32, we saw in the teens. It was especially nerve wracking because it was not really clear where the deeper water was. But we continued to make our way south and then southwest, eventually beginning to see the depths rise more forthrightly as we made it into the charted forty foot area.

By the time we had passed the red “12” marker, we felt comfortable we had made it around the bank. Bucking the outgoing current at that point, we rolled out the genoa and enjoyed being on the relatively open water for a while as we made our way back to the ICW. Before long, we had rejoined the waterway or, more appropriately, had passed across it as we headed for the Bull River and a quiet anchorage on Wimbee Creek. By the time we were dropping the hook, the sun was on its way towards the horizon. But we still had more than enough time to get our no-see-um screens up and have a beer in the cockpit to celebrate the safe passage and wash away the stress of the low water. 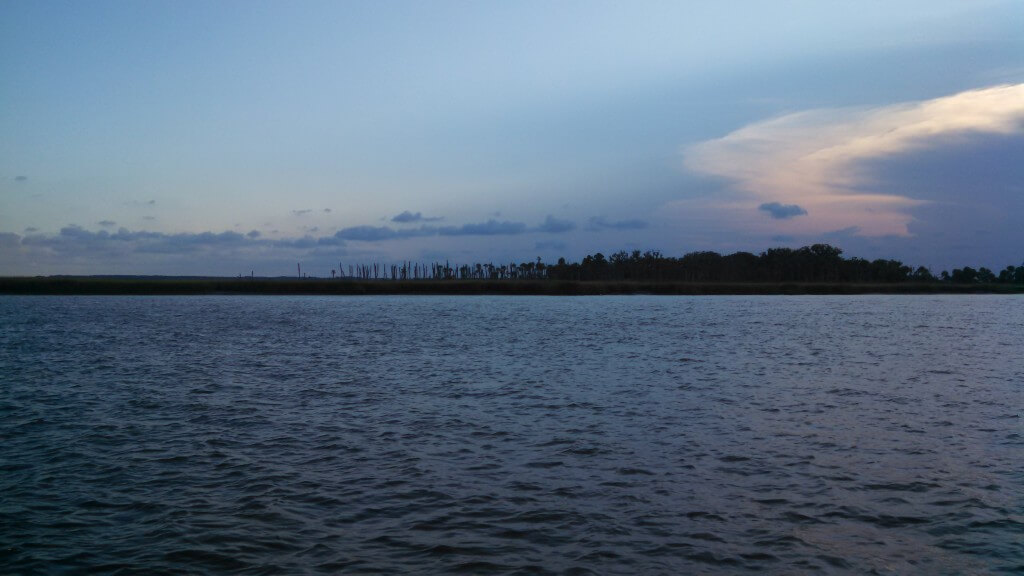 The view from our anchorage in Wimbee Creek

Not having gone through the Ashepoo Coosaw Cutoff, I do not know whether the route we took was better than the ICW itself. However, if I was doing it again – or perhaps I should say when we go through here again – I would be inclined to stay in the ICW where at least the channel is marked and the shoals are both well advertised on ActiveCaptain and behave in fairly obvious ways. The unpredictability and vast extent of the shoaling in St. Helena Sound around the Combahee Bank was the part that caused the most anxiety. An even better approach would be to hit the Ashepoo Coosaw Cutoff at high tide, which would provide more than enough water to get through, or at flood tide when at least we would know that if we touched bottom, we would be off quickly. Of course, if we had planned for high water here, some of the areas of shoaling that we passed through earlier in the day without nary a thought might be a little more touchy. But this is all just some of the fun of navigating the ICW.

4 Responses to Another Navigational Challenge on the ICW: The Ashepoo Coosaw Cutoff