On Our Way to Charleston: Navigating the Shoaling North of the Ben Sawyer Bridge

Initially, when my Dad and I arrived in Georgetown, SC, just off mile 403 on the Intracoastal Waterway, we thought we would push on the 65 miles to Charleston the next day, the Friday of Labor Day Weekend. However, as I looked over the charts, Skipper Bob’s Anchorages, and ActiveCaptain, it became apparent that we would not be able to make it all the way because of low water. In particular, there is a stretch of shoaling about two miles just north of the Ben Sawyer Bridge, which is the swing bridge that goes to Sullivans Island and is the last obstacle before we would reach Charleston Harbor.

In years past, the Army Corps of Engineers, who is charged with maintaining the ICW, would have dredged this portion of the channel long before it would have become a problem for our 5’8” draft. Unfortunately, Congress no longer provides enough funds for the dredging, so the ICW languishes. In the case of this stretch, the Corps had reported depths of only 4.2 feet at MLW back in 2013. And in case you thought something miraculous had happened in the intervening year, they were calling the shoaling “severe” in 2014. There was no way we were getting through without the help of tide, and low tide was going to be around 6pm on that Friday, right when we would be coming up on that section.

Instead of going straight through to Charleston, we decided to anchor up in Price Creek, 45 miles from Georgetown and about twelve miles from where the trouble begins. With a leisurely start on Saturday morning, we could hit the area of shoaling right near high tide, around noon, and then head into Charleston. The one thing that still put a wrinkle in our plan was the Ben Sawyer Bridge, which only opens on the hour from 9am to 7pm during the weekends. We would need to time our transit of the shoal area perfectly or be forced to circle in the shallow section, albeit at high tide while waiting for the bridge to open.

Sunset at anchor in Price Creek.

Price Creek turned out to be a great, secluded anchorage, one of my favorite of the trip. And, the next morning, we got going shortly after 9pm, not knowing exactly how the incoming tide would affect our speed. As we exited Price, it quickly became apparent that the incoming tide was pushing us onwards at a speed of over six knots. Since we were heading towards Charleston Harbor and its major outlet to the ocean, I had thought we would be working against the tide the majority of the way. But, as I was becoming increasingly aware of, the southern coast is riddled with small inlets, passes, and cuts to the ocean that affect the tidal currents in ways that are not readily apparent to the outsider. It was these same currents that were creating the shoaling that we were now trying to slow down our approach to. 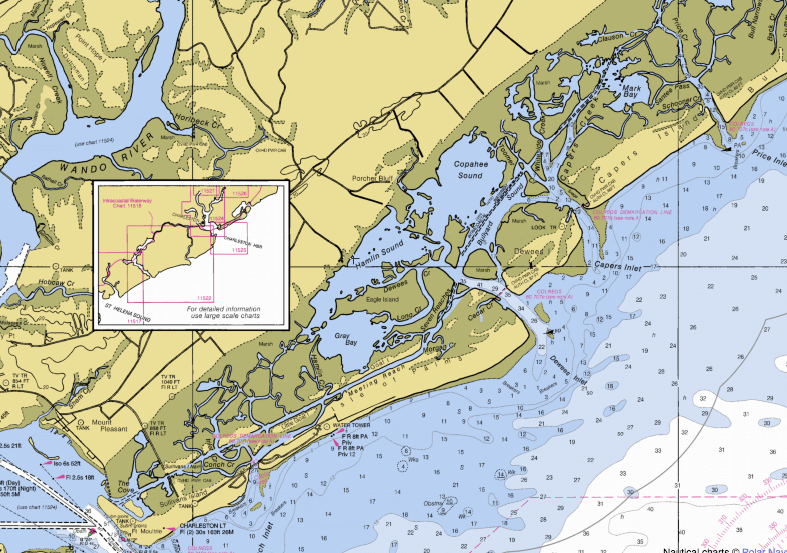 The stretch in question – Price Creek and Inlet in the top right and the edge of Charleston Harbor on the bottom left.

It took us exactly an hour to make it from Price Creek to the northern end of Isle of Palms, the island to the north of Sullivans to which it is connected by a fixed bridge over Breach Inlet. We brought the boat to idle speed trying to make the next six miles to the Ben Sawyer Bridge in two hours so that we could time the opening. Unfortunately, we were still speeding ahead at over 3.5 knots, pushed by the incoming tide. Despite my anxiety, there was a lot of stuff to look at with the large homes piled on top of each other, the golf course along the waterway, and the incredible number of boats out enjoying Labor Day Weekend. We got more than a few enthusiastic waves and shouts of encouragement when they saw our hailing port and realized we had come all the way down from the Northeast.

With the current continuing to push us and all the traffic swirling around, we approached green marker “117A” at the northern entrance to Breach Inlet where the shoaling started. As we passed by the opening of Swinton Creek, the depth sounder dropped precipitously, but bottomed out around 10.5 feet, giving us a nice cushion, but also indicating there was only about four feet there at mean low water. The water got a bit deeper for a moment, but another fifty yards or so down the channel, the depths abruptly returned to ten feet. Fortunately, once we passed through that other shallow area and headed for marker “119,” we did not really see too much change in depth. Undoubtedly, we could have passed over the rest without help from the tide – though it would have been tight – seeing lows of 13 or so the rest of the way to the bridge. 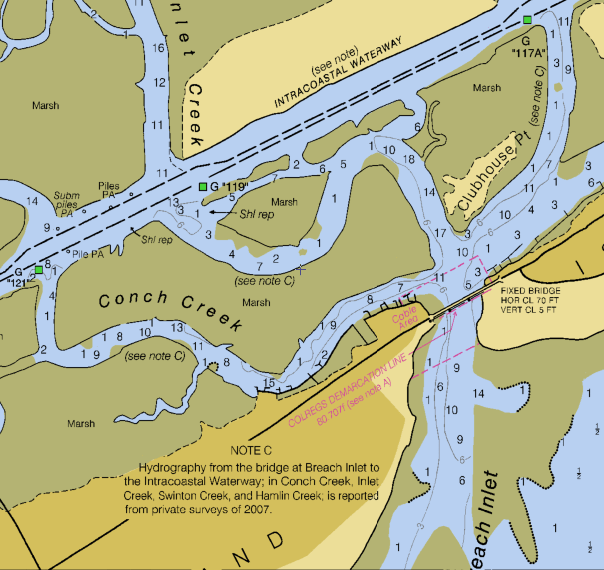 The stretch of shoaling – we were proceeding from east to west, right to left.

Now in the shadow of the bridge at 11:40, all we had to do was reverse and circle for twenty minutes until the opening. Despite what some folks on ActiveCaptain indicated, we found no shoaling here, seeing depths of 15 and 16 even as we circled twice, inevitably going out over the edges of the channel. Finally, noon arrived, the gates went down to stop automobile traffic, and the bridge swung around to let us through. From there, all we had to deal with was boat traffic as we headed out across Charleston Harbor, past Fort Sumter, and towards the anchorage up the Ashley River to the west of the Battery.

The Ben Sawyer Bridge. Incredibly I do not have a photo of this bridge from my Dad, so this is off of Flickr.

It felt good to successfully overcome our first severe shoaling area. And while it was important that we planned it out so meticulously, somehow it felt like I had been far too concerned about something that turned out to be rather easy. But, of course, it went so smoothly because we had adjusted our arrival time, carefully planned, and then adjusted our plan as the current pushed us in the opposite direction I thought it would.

If you missed it, check out our other posts on navigating the ICW.