An hour or two after we arrived in Cape May, while I was still winding down with a few beers in the cockpit, we broke out Eldridge (a book of tide and current tables, along with all sorts of other useful information) to check when the currents in the Delaware River would be in our favor.

Between some prominent shoals, shipping traffic, and the currents, the Delaware River can be nasty, especially when wind goes against the current, building up a short, steep chop. Far more often, though, the trip up the Delaware is a placid affair with just enough traffic and navigation to keep things interesting. In order to assure ourselves of these ideal conditions, we were looking to ride the entire flood current up the river in winds with some southerly component. If we could catch the beginning of the flood at the mouth of the bay, we would have about seven or eight hours in which it would be helping us as we made the fifty or so miles to the Chesapeake and Delaware Canal. A miscalculation would mean, at best, slowly working against the combined river and tidal current and, at worst, smashing into the aforementioned chop. There are no really well-placed refuges in which we could hide along the river should conditions turn against us.

What Eldridge told us was that we either had to leave the next day to have any chance of getting a favorable current and making it to Chesapeake City on the western end of the C&D canal before nightfall or we had to wait over a week to once again have the current behind us. With a couple repairs – particularly to the autopilot and outboard – to complete and a tired crew, there really was no question; we were going to be in Cape May for about ten days.

Rowing in from our anchorage, past the US Coast Guard training center.

Three years ago when I was in Cape May, I brought my dinghy ashore at the Corinthian Yacht Club. This time was no different. After relaxing on the boat for twenty-four hours, we rowed ashore at the Yacht Club in our Walker Bay with our inflatable and engine in tow. The club members never asked us whether we were members of a recognized club, but just extended the hospitality that their name implies. We tried to be good, unobtrusive guests, but throughout our stay we imagined that at least a few of the members were wondering when we were finally going to stop haunting their docks.

With the club as a landing place, we next met up with my parents’ good friends – and now our good friends too – Chip and Barbara. Barbara has been spending summers on Cape May Point her entire life, and Chip has been doing so nearly as long. They are the most generous people you could possibly meet. We certainly appreciated that generosity and made great use of it; I only hope they do not think we took advantage of it. They gave us use of their Jeep Wrangler, which allowed us to get a lot of boat work done, get Margaret to the dentist, provision, and really explore the Cape May area. They also opened their home (and their showers!) to us, allowing us to work in an air-conditioned space and, better yet, spend some afternoons and evenings with them in their own home and at some of their favorite places around town. It would take paragraphs more to detail all they did for us and many pages more to fully explain our gratitude. We will definitely share some more stories of our adventures with them in future posts. 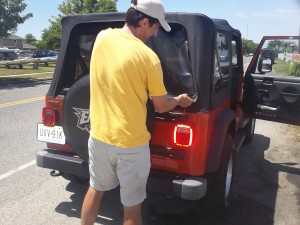 Our sweet ride…did you know that Jeep drivers wave at each other?

With a friendly dock, a home base, and a set of wheels, we were ready to keep up with our online teaching, get some much-needed work done on the boat, and enjoy our stay in Cape May. And, hopefully, in ten days time we would be ready to ride that current up the Delaware and into the Chesapeake. 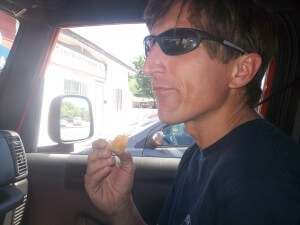 One of the first things we did with the car: I got some cheese… 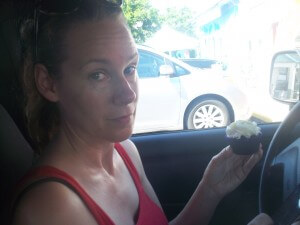 …and Margaret got a gluten-free cupcake.