Thursday morning we woke up around 8am, getting caught up on some much needed rest after being rudely rocked awake at 4am the morning before by the Hudson River current and a strong west wind during our last night at the 79th Street Boat Basin. We then had a leisurely breakfast while I double-checked the weather report. In general, the forecast looked about the same as it had before, though it seemed like we had more of a chance of seeing 10-15 knots from the north rather than just 0-10 as previously predicted. This increased the possibility that we would be able to sail down the coast, but it also made it more likely that we could see some even stronger winds. There was still a bit of uncertainty about the exact direction of the winds, but it did seem that the forecasts were coalescing around a definite northerly direction by the evening. After a little discussion, we decided – or I should probably admit that I made the call after telling Margaret about the forecast – to go as planned. 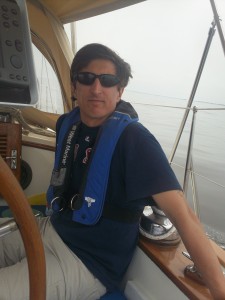 Heading out the inlet, ready for our first overnight trip

The rest of the morning was spent securing the cabin, getting the dinghy up on deck, and taking care of a few other last minute things. Before long, it was quarter to twelve, and we were pulling up the anchor. Within a few minutes of noon, we were off with cloudy, overcast skies and little wind.

Margaret took the helm as we rounded the hook and made our way out into the ocean through a good deal of fishing boats, both commercial and recreational. As we went from buoy to buoy outside of Sandy Hook, Margaret seemed to gain a little bit of confidence as the swell was regular and comfortable and, more importantly, she was not feeling ill.

Finally making the turn south about two miles offshore at buoy “S”, we were both hanging out in the cockpit and enjoying the sights. I ended up making some pasta for myself, while Margaret munched on pretzels. Everything was going splendidly until some two and a half hours into the trip, right as we were dealing with a large ship, unusually far into the coast, coming up on our stern. Suddenly, we heard a bang seemingly coming from the lazarette. As I began to take off one of the cockpit cushions to investigate, an alarm sounded and we started to head off course. A half second later, I realized it was the autopilot and, simultaneously, realized we were about 90 degrees off course. While I shut the autopilot off, Margaret got us back headed in the right direction. A quick look in the lazarette, in between talking to the captain of the large ship who, probably, had gotten a little nervous with our erratic steering, informed us that the arm of our linear drive autopilot had separated from the rudder post, meaning we had no self steering. After another twenty minutes climbing around the tight confines of the lazarette, including using a mirror to see some pertinent areas that were beyond my sight and grasp, I confirmed that we were going to be hand steering for the duration. 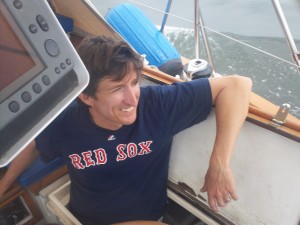 Coming up for air after spending time in the lazarette 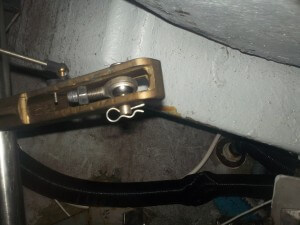 The bent and sheared off actuator ball joint

During the survey, our incredible surveyor, Phil Gaudreau, had noted that the rod end assembly, which is also known as the actuator ball joint and is really the thing that connects the arm of the autopilot to the rudder, was bent. He recommended that the thing be replaced. He also indicated that the Autohelm 100 unit that we had seemed to be either a little too long for the boat or installed improperly. Because of either of those two things, the autopilot could not completely go in one direction. It seems that the autopilot having to steer all the way in one direction is somewhat rare, but it does happen frequently enough to bend that rod end assembly. Of course, we did not act on Phil’s recommendation and, eventually, the pressure on the rod end assembly stripped the threads off the thing and the linear drive shaft separated from the rudder post. In our own defense, we have had quite a few actual broken things to keep us busy over the last month.

With one of us constantly at the helm, we continued on our way and successfully stayed clear of the large ship that, the captain informed us, was actually headed even further inshore to just off some large buildings north of Long Branch (what they were doing there, we never found out). We just chatted and stared at the sea for some time, as a bit of rain came down with hardly a hint of breeze. About five o’clock, Margaret announced that she was hungry and planned to make some rice in veggie broth. After going below for a few minutes, she came back up saying she felt nauseous and wanted to take the helm. I got her a ginger ale and started making the rice, and she seemed to recover somewhat. But she refused to give up the wheel, believing that being in that position helped her feel better, which was fine with me.

We continued on with Margaret at the wheel through the early evening. As the sun came out and the wind started to blow at 5-10 out of the south, I would alternate looking around at the sea and reading aloud from John McPhee’s The Ransom of Russian Art, which I had just picked up at a used bookstore in Connecticut. At one point, I looked up from the book and saw a dolphin off about a hundred yards. We saw a few more, but they were a ways off and disappeared rather quickly. But about fifteen minutes later, we saw about three or four dozen, all off our port side and heading towards shore, which also meant towards us. I went forward to the bow pulpit while Margaret watched from behind the wheel. They kept surfacing for air, usually two at a time, while they continued to swim on a diagonal course towards the coast, staying with us for maybe fifteen minutes. There were a few smaller babies in with the adults, though they were mostly a hundred feet or more away from the boat, making them a bit hard to see. At one point, however, one dolphin came clear out of the water about ten feet from our bow, right where I was. Margaret and I both screamed at each other in excitement, as much about its proximity as its size, which seemed huge compared to other dolphins we have seen before. 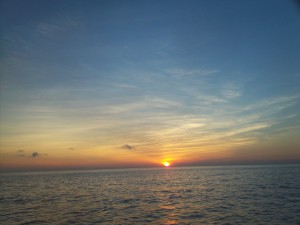 Nearing sunset, we finally got a clear view of Barnegat Lighthouse while we were still off Seaside Park. It was nice to finally see something other than the Oyster Creek Nuclear Power Station that was readily recognizable from four or so miles off the coast. Moreover, it marks the northern end of Long Beach Island, where I learned to sail and have spent so many good moments of my life. Shortly after the sun went down, Margaret began her first watch while I went below to get some sleep. We had decided to just do two hour watches, mainly because I was a bit concerned about how Margaret would take being up there by herself. I needn’t have worried, as she loved being at sea at night. Moreover, though we both fell asleep during some of our off-watch time, we could have definitely used longer stretches of shut-eye.

Margaret getting ready for her first watch

When my watch came around, Margaret informed me of our heading and position and filled me in on the traffic around us, which was minimal. Then she went below. Nothing too excited happened during either of my watches, but the time flew by. I have been night sailing many times before, but always on the bay, so having the ocean swell and the occasional large tow or fishing vessel in the area was something new. Though I enjoyed the experience, I would have had a better time had the autopilot been working. I wanted to stare off at the lights of Atlantic City, gaze at the stars, and really watch the moon rise out over the ocean, rather than just steal some glances at all that before having to look back at the compass to make sure we were keeping on the correct heading. There was also one point in my second watch when we were still some dozen miles from our waypoint, a buoy off Wildwood, that I saw another flashing red light that I thought was a mile or two ahead right on our course. Since we do not have the chip for our chartplotter in the cockpit (which is another story), we have been using paper charts and compass bearings and, occasionally, double-checking things below on the chartplotter at the nav station. That meant that I needed to either go below for a bit to check out the chartplotter or try to get a good enough glimpse at the paper chart next to me to figure out what I was looking at and, as I feared might be the case given I did not expect to see a buoy in this location, see if we were off course, which was a terrifying prospect. Had the autopilot been working, it would have been a simple matter. However, without the autopilot, I ended up taking quick glances at the chart for the next five minutes until I finally figured out that the buoy was marking the Avalon Shoals, an area of no concern to us, just off our course.

By the time the sun came up, we only had about three more hours to Cape May. The wind had built to 10-15 through the night and slowly shifted from the south to the north through the west. With Margaret steering, we were getting tossed around a bit by the established south swell and the building northern swell along with the winds that were creating it. I unfurled most of the genoa, which instantly stopped the worst of the rolling and gave us nearly a knot of additional speed. We proceeded that way as we neared the coast, taking in the roller coasters and other amusement park rides along Wildwood and watching all the traffic coming from the south: large commercial ships from the Delaware and smaller fishing boats from Cape May Inlet.

Finally, we made it to the buoy just off the entrance to Cape May Harbor, furled the genoa, and proceeded in. Right before we entered the gap between the jetties, a half dozen dolphins came out to greet us. Moments later, all the motion stopped as we cruised through flat water for the first time since just after we picked up the anchor in Sandy Hook. We ghosted into the anchorage and easily set the hook in about twelve feet of water at low tide. We were both exhausted, but also elated to have made it. After straightening up the cabin and making the bed, we went back up into the cockpit and took in the harbor while I drank a few beers. By eleven, though, we were fast asleep. 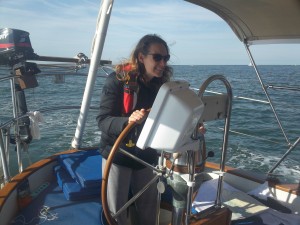 Margaret, happy to be bringing us into the Cape May Inlet 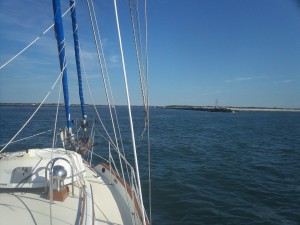 Coming into the Cape May Inlet

We also have a video of our trip up on Youtube.

One Response to Sailing from Sandy Hook to Cape May