Trying to Fix Our Outboard in Cape May

Our 5hp Mercury came with Bear when we bought her. The engine was something that was not in the listing, but the broker had mentioned as being part of the deal. We had almost forgot about it before we left Branford, but David, the previous owner, reminded us to pick it up from the yard mechanic before we cleared out. At nearly the last minute, I managed to track down the mechanic and get our engine. He had forgot that he had it too, but we were able to find it on a rack in the back of his shop. I suspect that with a bit more time, the mechanic would have serviced the engine, but we did not give him that opportunity. Instead, we just strapped the engine, which had been sitting for the past two years, on the stern rail of the boat and figured we would get it working at some point in the future.

As we made our way through Long Island Sound, we continually rowed to shore, putting off working on the engine. The engine was too big for our Walker Bay, and I had always had a lot of difficulty inflating and, especially, putting the floorboards in our West Marine SB 275. Moreover, we had so many other issues to deal with that getting the outboard working was not a top priority. Finally, at the 79th Street Boat Basin, we inflated the dinghy and first attempted to get the outboard started. At that time, we could not get the engine to turn over at all. I realized the fuel filter was clogged and imagined that we might need a new spark plug as well, though I never tested it. I also figured that once we took care of those things, we might have to take apart the carburetor to get some residual, gunky fuel out of it. Being in Manhattan, we found it impossible to find the fuel filter or sparkplug, shelving our attempt to get the outboard working at that time.

Arriving in Cape May, the outboard, along with fixing our autopilot, became our primary goal. So, on our second day in the harbor, we took the inflatable and the engine in to the Corinthian Yacht Club and tried our best to get it to work. I installed a new spark plug, which we picked up at West Marine, and a new fuel filter, which we found at an auto parts store and was originally for a lawn mower. We also picked up some fresh gas so we were not using the stale, two-year old stuff we found on Bear, under the bathroom sink. Even with all of this, the engine was not beginning to start. Figuring there must be some gunk in the carb, I undid the drain screw in it (at the back lower end of the carb), put a paper towel under it, and pulled on the starter cord. Instead of crud, good looking fuel poured out. So it seemed we did not have a clog in the carb. 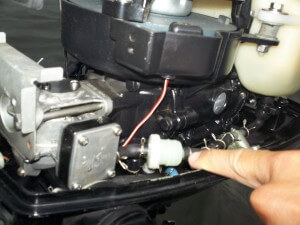 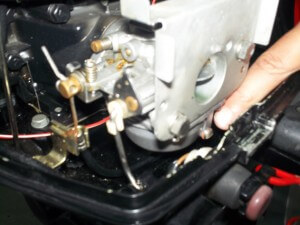 The carburetor and the “crud” drain.

By this point, I had more or less reached the end of my small engine knowledge, which, admittedly, is not very large. Consequently, Margaret and I turned to the only idea we had left: try to start the engine repeatedly until I tired of pulling the cord. Unbelievably, on what I had already announced was going to be our last attempt, the engine roared to life. And then it promptly started to pour out smoke from every part of it. After only a half second of hesitation, I quickly pulled the kill switch. Upon opening the top, we realized just how narrowly we had avoided a fire; gas was all over the bottom of the engine case and seemed to be flowing out of the carb. With that, we decided we best turn to an expert.

Fortunately for us, I had previously had some work done on a small outboard the last time I was in Cape May and was very happy with the service. So, we packed the outboard into the back of the Wrangler and took it to Morgan, who owns Whale Creek Marina in Strathmere, just north of Sea Isle City. Morgan and his wife are folks about our age who are super cool. It also turns out that they just bought a Cal 29 and plan to take it down to the Bahamas this winter. As soon as I took the engine out of the car, Morgan got it up on the rack and explained exactly how he was going to troubleshoot it, in effect teaching me how to do the work myself. Unfortunately, he did not have the time to do the work then, or I could have learned even more. But he did promise to get the engine back to me as soon as possible.

True to his word, Morgan called less than forty-eight hours later and said the engine was as good as new. When I picked it up, Morgan explained that he had to rebuild the carb, something that was fairly easy as there are carb rebuild kits (and, with Mercury and Tohatsu being essentially interchangeable, he had had one on hand). After exchanging email addresses so we could try to stay abreast of each others’ cruising plans, I headed back to Cape May. While I hope I never have another outboard issue I cannot deal with again, I would not hesitate to trust a problem to Morgan at Whale Creek. And, I hope we get a chance to catch up with him and his wife in some anchorage somewhere down the road. And, so far (fingers crossed), the engine has been nothing but reliable. 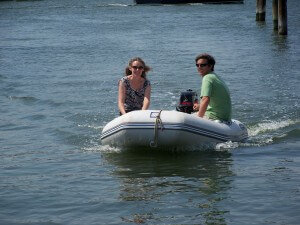 Us rocking the dinghy. Photo courtesy of my dad!

4 Responses to Trying to Fix Our Outboard in Cape May