Some Thoughts after the First Day of the Miami Boat Show

After hauling down from Illinois to Florida and picking up my Dad near Charlotte Harbor, the two of us rolled into the Miami Boat Show around 2pm today. We started off at the Strictly Sail portion of the show, casing the vendors who were set up under a large tent at the Bayside Marketplace, a great outdoor mall fronting the water in downtown. After moving through that area, we headed over to the main show at the Miami Beach Convention Center. Finally, we returned to Bayside, both tuckered out, and got ourselves some dinner before leaving for our hotel by the international airport.

We managed to take in the entire show in just about four hours, but we will be returning tomorrow so that I can spend more time investigating a few projects and products in further detail. Depending how we feel, we might also get aboard some of the many sailboats that are on display in the marina at Bayside. We are most definitely not shopping for a boat, but we enjoy poking around the new boats and taking in their new-boat splendor (who doesn’t like the look of a Gunboat?).

I will be detailing a few of the things that I investigated and learned about today in a future post or two, but I wanted to say a little about my general impressions of the show and give a few highlights right now. And I should preface my comments by saying that this is my second trip to the Miami Boat Show, having met my Dad down here for the weekend back in 2012.

First off, the show as a whole seems even more oriented towards powerboaters than I recalled. Outside of the Strictly Sail venue, which itself had only a few dozen exhibitors beyond boat manufacturers and charter companies, there are almost no folks who manufacture and sell sailing-specific products exhibiting, let alone who specialize in sailing gear. And, even those companies who I usually think of as oriented towards the sailing community, such as Gill to name one that pops in mind, had made sure they looked like the epitome of all things stinkpot. I still enjoyed being at the show, learned a thing or two, and found more than a few products that would be useful aboard Bear, but I did feel like I was on enemy territory when at the main show. Additionally, many of the products, sailing gear all, that I would have liked to have seen and learned more about were simply not represented at the show. It says something about the Miami Boat Show, but, even more, just goes to show that the powerboat crowd is the real economic force keeping the boating industry afloat. 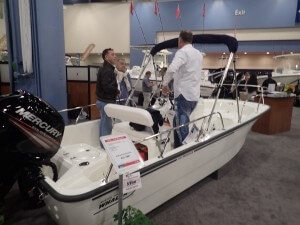 We had to stop by to see the Boston Whaler Montauk, one of which we owned and loved for a dozen years. You see, I am not anti-powerboat!

I also had an interesting experience at what appeared to be the Sta-Lok booth, with branded displays, catalogs, and the like. But when I went to discuss the intricacies of the product and learn a little more about installing it myself, I was told that I should not be doing my own rigging and they all but refused to tell me anything about the product. I quickly realized that instead of Sta-Lok, I was talking with a Florida-based rigger who just happened to be an authorized dealer for Sta-Lok. When they found out Bear is an hour and a half from them, they instantly tried to sell me on their services. Had the interaction been a little different, I would have appreciated hearing more about their business and might have even happily hired them in the future. I definitely would have been buying my Sta-Lok terminals and rigging wire from them rather than some faceless online retailer. Instead, I came away frustrated, no more knowledgeable, and desperately hoping I will not need to hire a rigger, especially this one. I was also upset with the structure of the marine industry, which seems to actively discourage people from becoming more self-sufficient, developing skills, taking pride in their own work, and, ultimately, being more seamanlike. 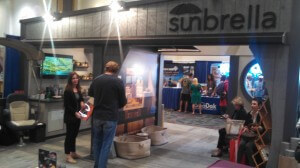 Too bad Margaret was not there. Sunbrella had an awesome booth with all their fabric swatches on hand.

To turn to more positive things, the weather was fantastic, comfortable long-sleeve temperatures with lots of sunshine. Having the Strictly Sail right on the bay was also great, allowing me to look out over the sparkling water, dream of sailing, and forget all about the nastiness of winter up north. Further, the Columbian tourism board was thoughtful enough to distribute free espresso drinks. I know they made me more likely to spend weeks on Providencia and San Andres, wait out a hurricane season on the hard in Cartagena, and undertake a refit along the Magdalena. As wonderful as the espresso was, the free Botran rum, from the same distillers that make the fabulous Zacapa rum, topped it. And when I say free rum, I am not talking about a thimbleful, but a full-on three-finger pour. Yes, my Dad and I will be back at the show tomorrow. And, you can bet we will be discovering a little more about Colombia and sampling another glass of Botran.