On the trip south, we did not encounter the gales that I had experienced on my last passage to the BVI. But we did have our share of adversity, battling headwinds nearly the entire trip, enduring three different bouts of steady winds in the upper 20s with confused seas, and ghosting along through 60 hours of light winds while we conserved our limited fuel. All-in-all, the passage to the BVI was challenging and fun, though far from champagne sailing.

The passage to the BVI began on a Saturday as Felipe and I left the dock in Annapolis in gusts into the upper 30s. We had a lively sail down the Chesapeake, not sure if we would continue offshore immediately, wait for weather in Hampton, or continue on to Beaufort by way of the ICW.

By the time the winds faded south of the Patuxent, we had made our decision to wait in Hampton. The winds were clocking from north to east in the next twenty-four hours, creating a wind-on-current situation in the Gulf Stream before putting the wind on the nose heading out the bay. Eventually, the winds were forecast to come around to the south, which promised an easier sail and smoother trip through the stream.

We arrived in Hampton at first light on Sunday and put the hook down behind Fort Monroe. The rest of the day we spent aboard, sleeping, looking at weather, and taking care of a few last boat jobs and internet work (and discussing with Margaret whether we would head for the BVI or just shoot down the coast and ICW to the Bahamas, which is a story for another post). We planned to start the passage to the BVI in earnest the next morning as soon as the wind started to come around from due east.

As dawn broke, the wind was still steady out of the east and all the models suggested we would be sitting around until at least mid-morning. By ten, we were itching to go and began to make final preparations. We had the anchor up by 10:30 and headed out. Unbeknownst to us, the bulk of the Salty Dawg rally fleet had the same idea, and we were in the vanguard of about forty boats, which were filling our chartplotter on AIS and, in some cases, surrounding us just a few boat lengths away.

At the mouth of the Bay, the wind was coming SSE, but the swell was right on the nose and steep, stacking up against a swift outgoing current. With a few minor boat problems (more about both in a later post) that caused me to spend too much time hunting through lockers and looking in the bilge, I began to feel seasick. The illness only got worse over the next thirty-six hours as we battled winds to around 30, gusts to 40, and some violent and confused swells in the Gulf Stream. 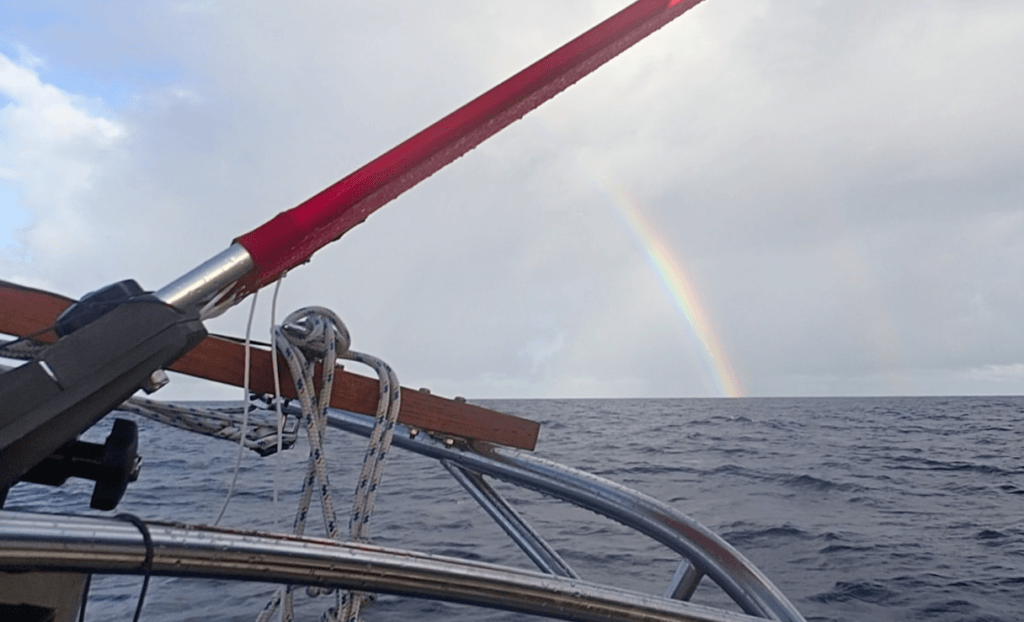 The windvane was a huge help on the passage to the BVI. The photo is obviously from one of the calmer days of the trip!

By the time dawn broke on the second full day, I was feeling considerably better, except a severely upset stomach. After consulting with Felipe – our official medical officer once we found out he had been an EMT in high school – I forced myself to throw up over the rail. And with that, I left the seasickness behind, getting more and more clearheaded and capable belowdecks as the trip went on. 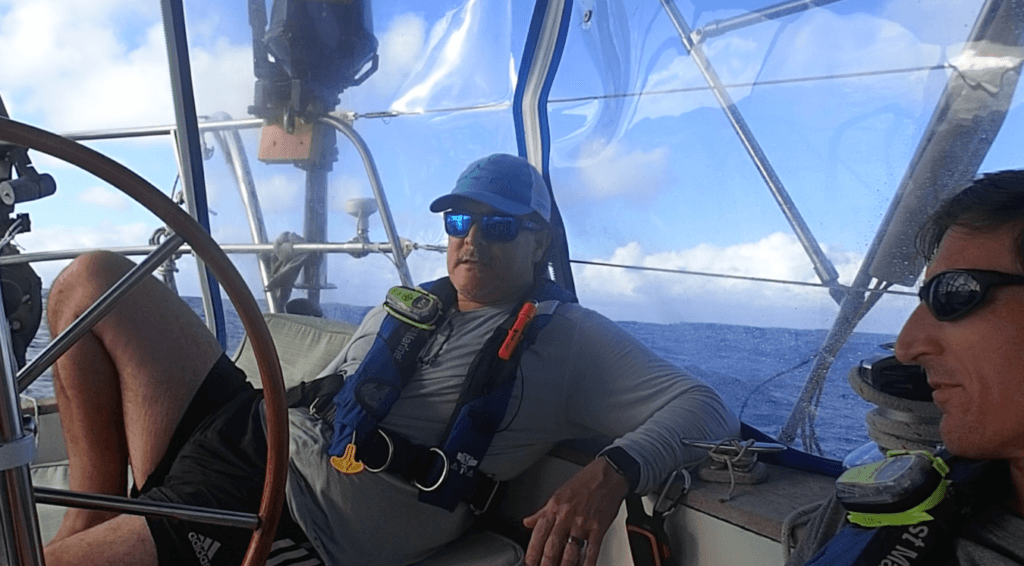 Felipe relaxing in the cockpit during the passage to the BVI.

Over the next several days, we hurried south, trying to put Bermuda and the chance of a heavy system coming off the East Coast and catching up with us behind us for the rest of the passage to the BVI. That meant sailing when we could and motoring when we had to, which was far too often. We did manage to get south of Bermuda rather quickly, but not before we debated heading in to top off our fuel reserves, which seemed, without an accurate fuel gauge, to be down to about 24 hours. Following an overnight eastward motor in light winds on the latitude of Bermuda, we finally decided to turn off the engine, point our bow towards the BVI (or at least south and east as conditions allowed), and become a sailboat the rest of the way.

For the next sixty hours, we sailed south and then east in a light breeze, trying to gain easting on the forecasted southeast trades and attempting to put some distance between us and the heavier winds at the edge of a massive high that was pushing southwards off the East Coast. Eventually, that system overtook us, delivering our second dose of stronger winds and our most bone-rattling seas of the passage to the BVI. At one point in the night, we were repeatedly screaming under staysail alone down waves at 7.5+ knots then crashing into a more south-easterly swell that would bring our forward progress down into the twos. 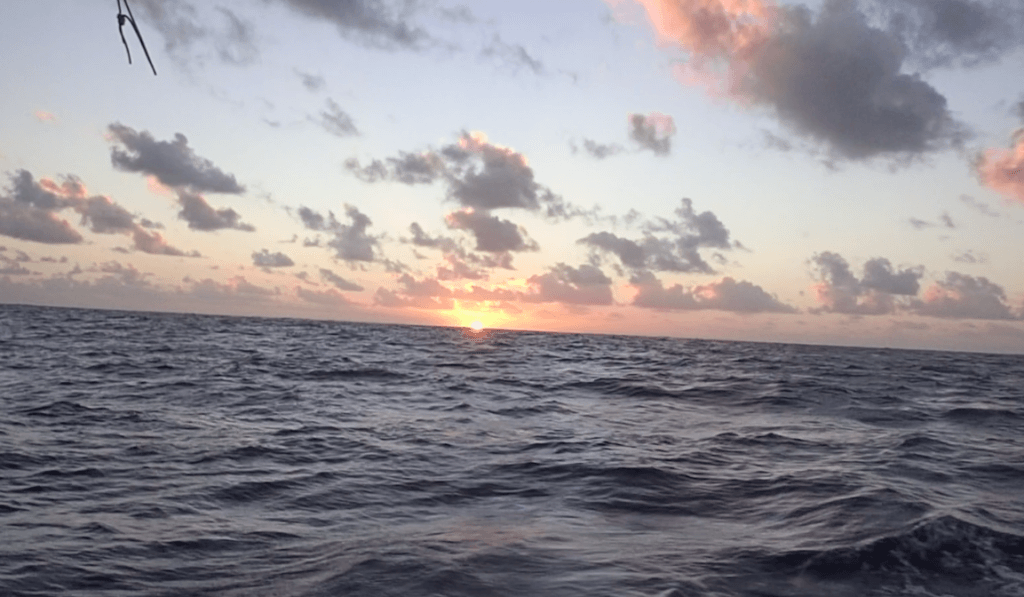 One of the many beautiful sunsets we had on the passage to the BVI.

By the following afternoon, the seas and wind had moderated, and we were sailing along in near perfect conditions. A celebration – or at least a warm dinner in the cockpit with a spot of rum – ensued as we toasted our entrance into the trades and what we hoped would be the beginnings of an easy passage to the BVI. Over the next five days, we continued to rush along in the trades, but often hard on the wind as we tried to preserve or make precious easting in a breeze that was somewhere south of east. And one of those nights, we had another bit of winds in the upper 20s as we stayed hard on it, making for our third and easiest encounter with something approaching heavy weather. A developing tropical wave south of us also kept things interesting for a few days as we closely monitored its progress and potential track.

About 200 miles out, it became increasingly clear that we were not going to make the BVI by nightfall the next day, a Saturday. So, we made the decision to sail hard through the night and then ease off in the daylight to time an early Sunday arrival. On Saturday, we did not even adjust the sails for performance and just proceeded along at a comfortable 3.5 to 4.5 knots. Then, at sunset, we hove to, making way directly towards Jost at under 2 knots. In the early am, slightly west and south of Anegada, we started sailing again, eagerly waiting for dawn and our first glimpse of the islands that had only been outlined by street and house lights to that point. 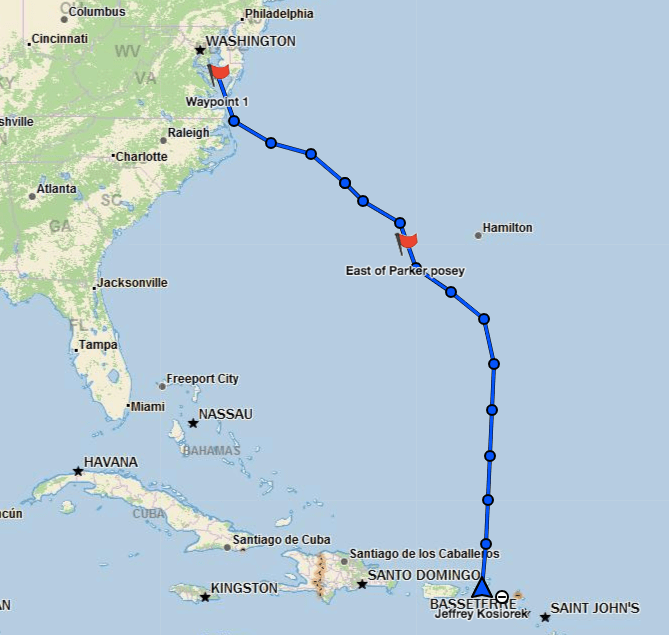 The track of our passage to the BVI.

The wind slackened as the light built in the east over Virgin Gorda, but we were still able to sail between Little Jost and Sandy Cay, finally losing our breeze just as we fired up the engine outside Great Harbour. Easing into the harbor, we picked up a mooring, successfully completing our passage to the BVI. It was quite a moment for me, having been planning and working towards it for several years, not to mention enduring the fatigue of the actual passage. But besides a hug and a few cheers, we left the celebration for later as we put the dinghy in the water and I showered for the visit to customs and immigration. 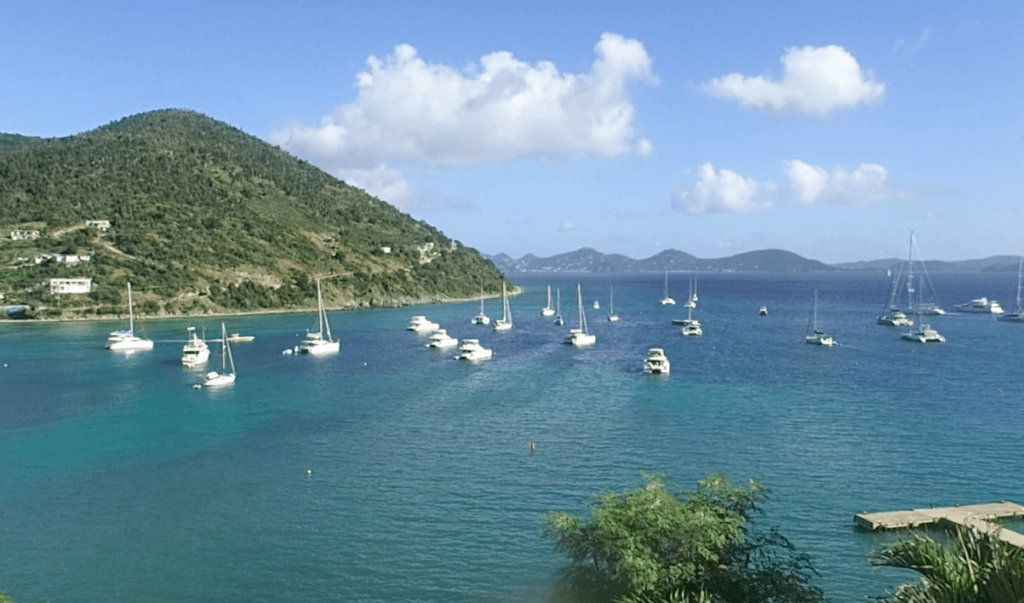 Bear in the middle of the mooring field at Great Harbour on Jost Van Dyke. She looks a lot saltier than the charter boats, in my humble opinion!