When Felipe and I first arrived at Nanny Cay marina a day after we checked into the BVI at Jost, we were only planning on staying for three days. Flip and I would have the boat cleaned inside and out by the time Margaret arrived. Then the three of us would have an epic arrival banquet. On the second day of our stay, we would get some boat work and a day trip to Norman in before Felipe departed the following morning. That would still leave Margaret and I twenty-four hours to get some more jobs done before we slipped the dock lines and started hopping around the BVI.

You know how this story goes. We played dominoes, relaxed by the pool, and otherwise worked our asses off while only taking a week to finish a tenth of the jobs that we imagined we would complete in three days. And we never really contemplated getting away to Norman, with or without Felipe. 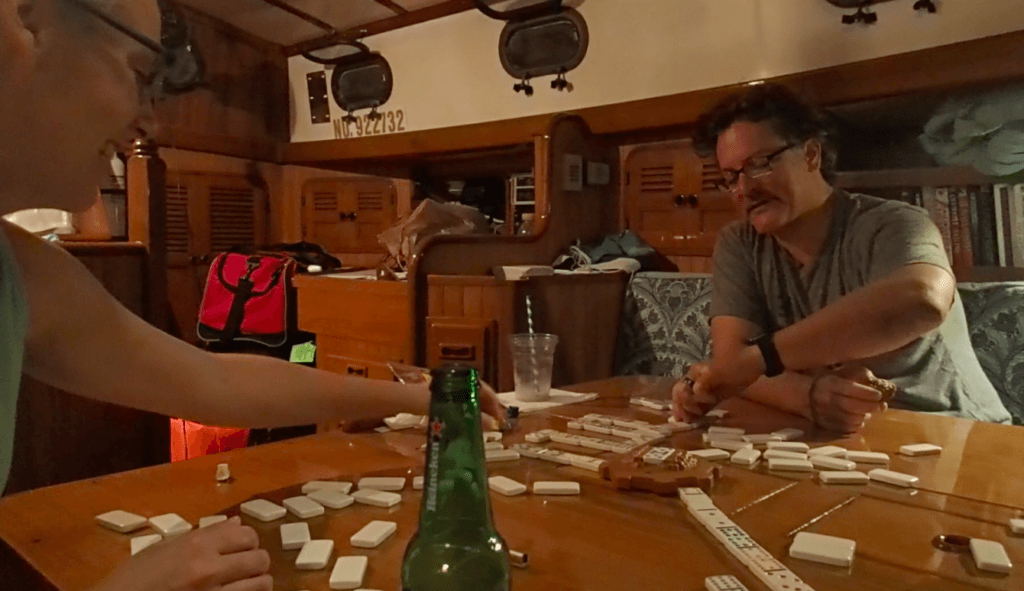 A little dominoes before bed.

Our major stumbling block this time proved to be the staysail, which, on the passage to the BVI, Felipe and I had started to refer to as “the mighty staysail” for its steady reliability, calm comfort, and hardcore sailing whenever we deployed it. Actually, to be fair to the mighty staysail, it was not sail itself, but rather the furler that caused us problems.

Back in Annapolis, Margaret, our friend Jon from s/v Jade, and myself had replaced our staysail and genoa halyards. While we were doing that, Margaret had commented on how worn our sacrificial fabric and stitching was on both the foresails. She even said something about it not lasting very long if we had anything over thirty. With so many other things to complete during those last days before departure, I just shrugged her comments off and said something about worrying about it when we got to the Caribbean.

Over the next two weeks, Felipe, Bear, and I thoroughly pushed the activating part of Margaret’s prognostication – “if we had anything over thirty” – to the brink. The sacrificial fabric on both the foresails survived, but just barely. Over half of the stitching needed to be replaced with a good deal of that missing completely.

On the boat work list I compiled during the passage down to the BVI, restitching the sacrificial portions took high priority; it really was not clear that the fabric itself would be around for much longer if we did not doing something about it very soon. And, so, Margaret and I figured that with having the space ashore and ready electricity at Nanny Cay, we had to take advantage of the opportunity to get the job done.

The morning after Felipe left (and taking care of some other unforeseen issues, I travelled with him on the ferry to St. Thomas for the day so that I could get an ATT sim card and take care of some paperwork), Margaret and I brought the staysail down. Following a search around the yard for a grassy place with access to electricity, Margaret ended up choosing to do the job in the glaring sun on the foredeck. But that just meant that in between the several hours she spent restitching the sacrificial cover, we had a mid-day pool and nap break. I spent the time she was working as an apprentice, helping her corral the sail, bringing her tools, and watching her work, learning something about the sewing and sail along the way. 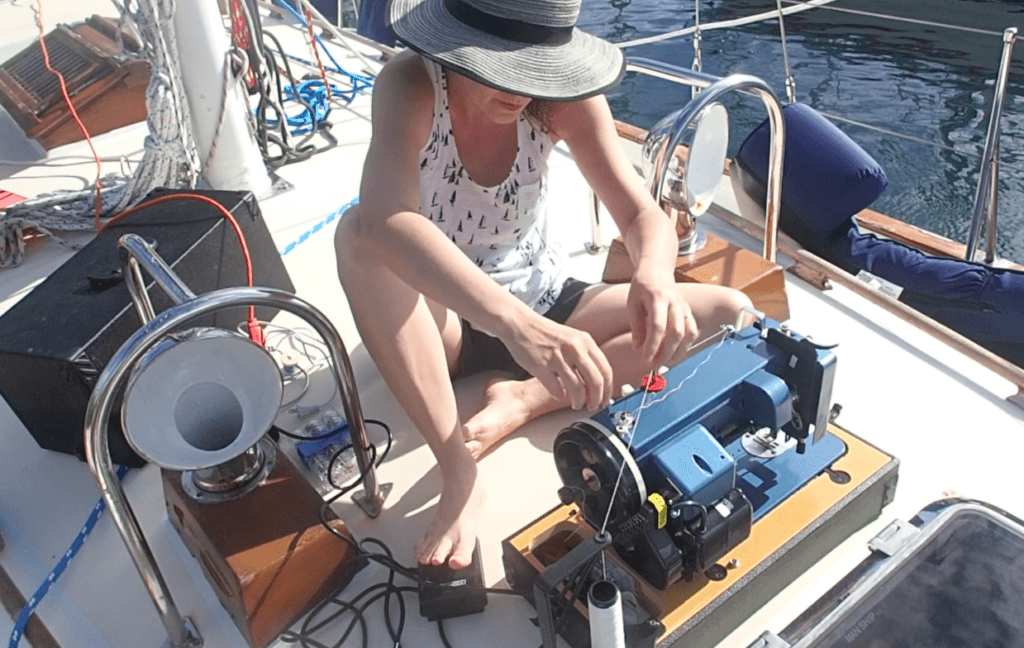 Margaret getting the Sailrite ready on the foredeck.

In the cool of the following morning, we started to put the staysail back up, intending to turn our attention to the genoa the rest of the day. But just after the staysail passed the second extrusion on our ancient Pro-Furl furler, the second and third extrusions separated.

We have had problems with the extrusions before. Back when we had replaced the standing rigging, I had, with a noble, but eventually unrealized goal in mind, removed some of the set screws from the extrusions. Unable to quickly source set screws, I had used a few machine screws and some creativity to get the furler back together. A few of those screws have since loosened, despite Loctite Blue. We have found out those screws have come loose when initially rigging the sails at the beginning of the season. Each time, it has required me to go up the inner forestay and either remove or tighten a screw. 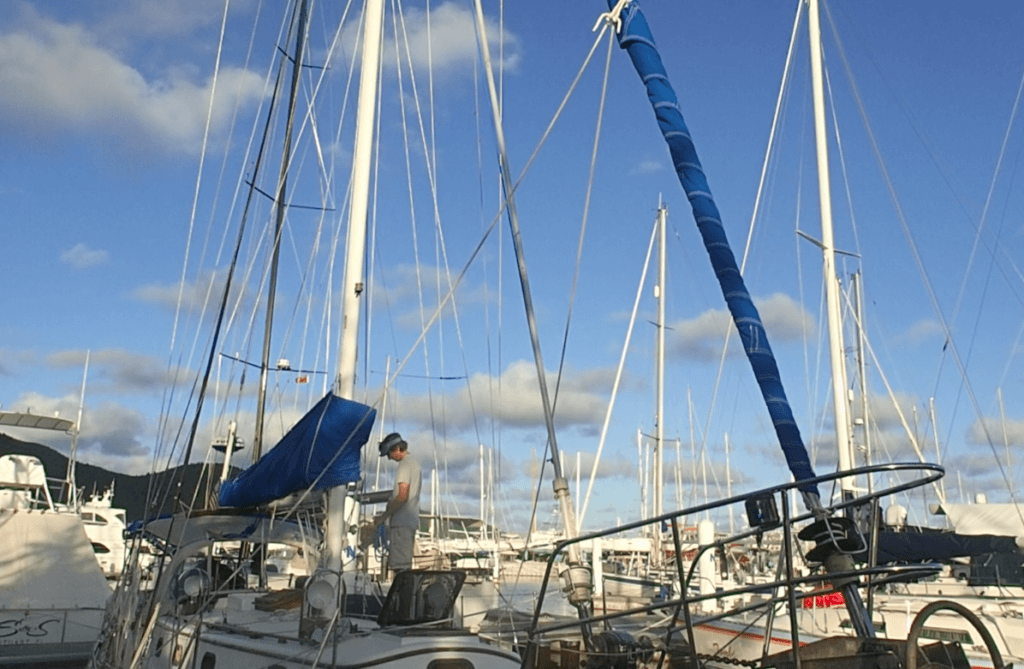 Now, loose screws were still bedeviling us, but we had a bigger problem. After trying to solve it with the inner forestay up, we decided that we needed to drop the stay so that we could drill, tap, and replace screws in the furler. After loosening the inner forestay’s turnbuckle, Margaret hoisted me up the mast with the windlass. Once at the top of the inner forestay, I took out the cotter and clevis pins holding the toggle on the tang, tied a line to the top of the stay, and lowered it. Margaret stood below, guiding the stay and furler onto the dock. Next, I made the repairs, replacing a missing machine screw with a larger diameter set screw. And then Margaret sent me up the mast again, where I hauled the furler up and reattached it. Then we tightened the turnbuckle. 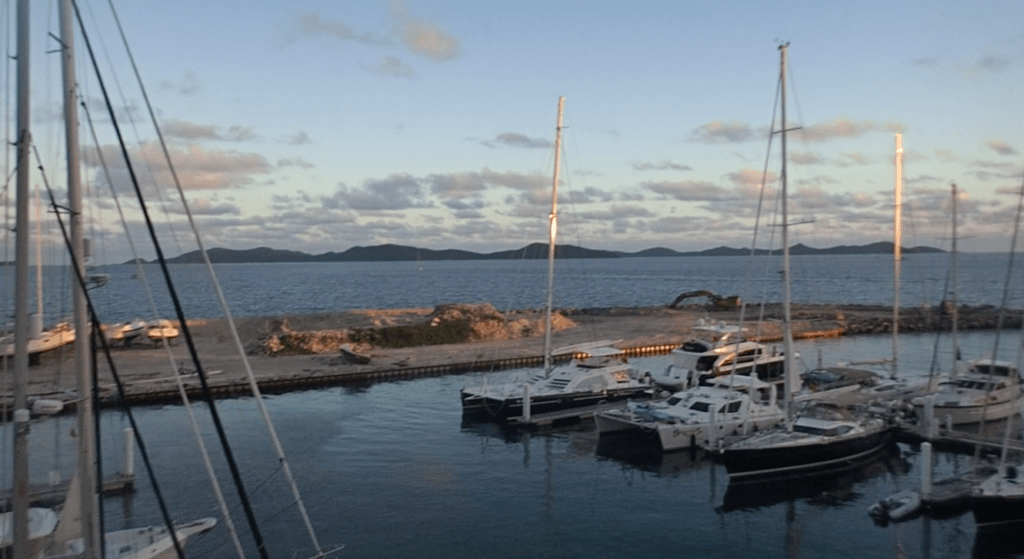 At least the view from the top of the mast was no slouch. That is Peter and Norman Islands in the distance.

All of that work we completed with appropriate mid-day pool and nap breaks. And so it was that yesterday evening we re-raised the staysail, only to have the same two extrusions separate. This time it was the lower, rather than the upper extrusion, that actually separated from the connector. The different issue did not change the process; we still needed to loosen the stay, go up the mast, bring down the stay and furler, make the repairs, go back up the mast, raise the stay and furler, tighten the stay, and then re-raise the staysail. But the lower extrusion coming off the connector at least meant that it was not the same problem over again. We had successfully reattached the third extrusion to the connector the first time. And that gave us the slightest bit of hope after the searing disappointment.

Since we brought the stay and furler back down in the quick period between sunset and utter darkness last night, I was able to get to work on the furler first thing this morning. I ended up putting in a half dozen larger set screws, replacing a number of machine screws, missing screws, and even one original set screw that was loose. I also sprayed the remainder of a bottle of SailKote in the track to reduce friction. Then, as the day grew warmer and the noon checkout time approached, we replaced the furler and stay and wearily raised the staysail again. This time, for the love of all that is good in this world, it went up without a hitch. 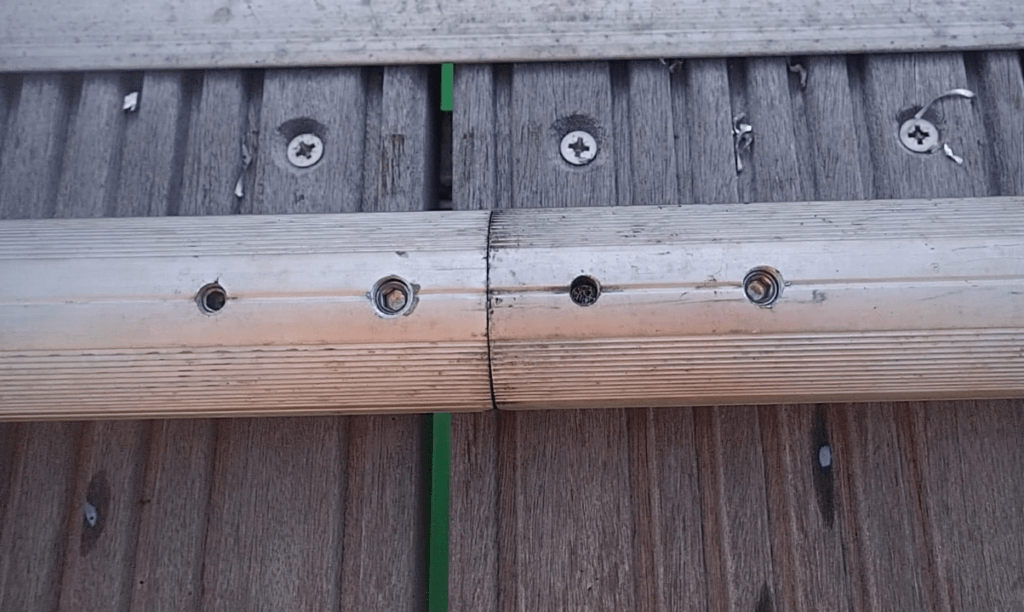 Two replacement set screws and another hole about the be re-tapped and filled with a third. An original set screw is to the far left.

Now nearly eleven, Margaret did some minor yet important last-minute provisioning at Nanny Cay’s grocery while I straightened up the running rigging, put the tools away, and otherwise readied Bear for departure. Then we showered and paid our bill. Finally, we pulled out at a late but respectable half hour after noon. Though we did not check a ton of things off our list during our extended stay at Nanny Cay, we felt a great sense of accomplishment getting our Pro-Furl back in action. Moreover, if we still have some hope left, we believe we have put the set screw issue behind us. At the very least – and probably more realistically – we now know how to fix the issue should it arise again. More important than any sense of accomplishment though, we were also rewarded by a slow and lazy – no mid-day naps, though – sail down Tortola, through a few of the bays along the north shore of St. John, and then around Great Thatch and over to Great Harbour, which is only the first day of our clockwise exploration of the BVI over the next few weeks.