A Crew’s View – Part One

I am Jeff’s father and I had the pleasure of sailing with him from August 26th from Wrightsville NC through the end of his voyage in St. Mary’s Georgia on October 6th. When he asked me to join him my immediate response was YES. But I can say that I entered this journey with fear and trepidation.

Jack (Jeff’s Dad) at the helm of Bear

Jeff had presented the possibility in the early summer of needing me as crew sometime during his journey. Margaret would have to head back to Peoria for the start of the semester around August 15th. At the time they didn’t know how far they would be down the ICW come August 15th nor did they know what marina / boatyard they would be leaving Bear at for winter storage. Marilyn (Jeff’s Mom) and I had plans booked since January to fly out west for the first three weeks of August traveling through Utah, Montana, and South Dakota, returning to Florida on the 19th. So I wouldn’t be available until after our return. Also, Jeff and Margaret weren’t sure if they could convince a friend or relative or two to crew for Jeff in August after the 15th. Jeff did say at the time that if push came to shove he would sail Bear solo although that was not his first choice. As it turned out Jeff’s cousin, Tim Walker, was able to join up in Norfolk VA on August 15th and stay with Jeff until the 27th. I got the call to meet him in Wilmington NC when Tim departed as the boat would be anchored in Wrightsville Beach. I didn’t want to pass up the opportunity to spend time with my son and agreed to go.

Marilyn and I had several friends who made the journey down the ICW from New Jersey to Florida in power boats. The stories of their adventures really interested me. It was something that I wanted to do at least some part of the way and Jeffrey was giving me that possibility. Also, talking to Jeffrey and Margaret about their travels and reading about their exploits in this blog peaked my interest even more.

Dad and Jeff after dinghying ashore for showers at Morningstar Marina on St. Simons, Georgia

I am not the lover of sailing as Jeffrey is. I love being by the water but I only enjoy being on the water – boating. Marilyn and I have owned two boats. The first was a 14 foot Sunfish which we purchased in 1984. Jeff was 8 at the time and once he got to sail Tipsy it became his love. I would sail it on Sundays in senior races at our yacht club. And by the way I was not too proficient at it. Jeff would use it the other 6 days of the week. We purchased a 17 foot Boston Whaler in 1987 that was used primarily for enjoying the bay and creeks around Long Beach Island. These were not the style of boat that you would travel far upon nor would they be the type that you sleep upon. My experiences of sleeping on a boat were one night in the waters off of Tortola in the British Virgin Islands (Marilyn can tell you why it was only one night) and then one night with Jeffrey on his Catalina when several boats sailed up Manahawkin Bay and we anchored off of Harvey Cedars. So I did not have a lot of experience staying aboard a boat for any more than 24 hours and Jeff was asking me to handle at least 10 days. One of my other issues is that I would get severely sea sick if I ever went into the cabin of a boat in motion. It happened to me several times when we were on day trips with friends on their power crafts. I was a little apprehensive going with Jeff knowing that I could not spend the entire ICW journey top-side. 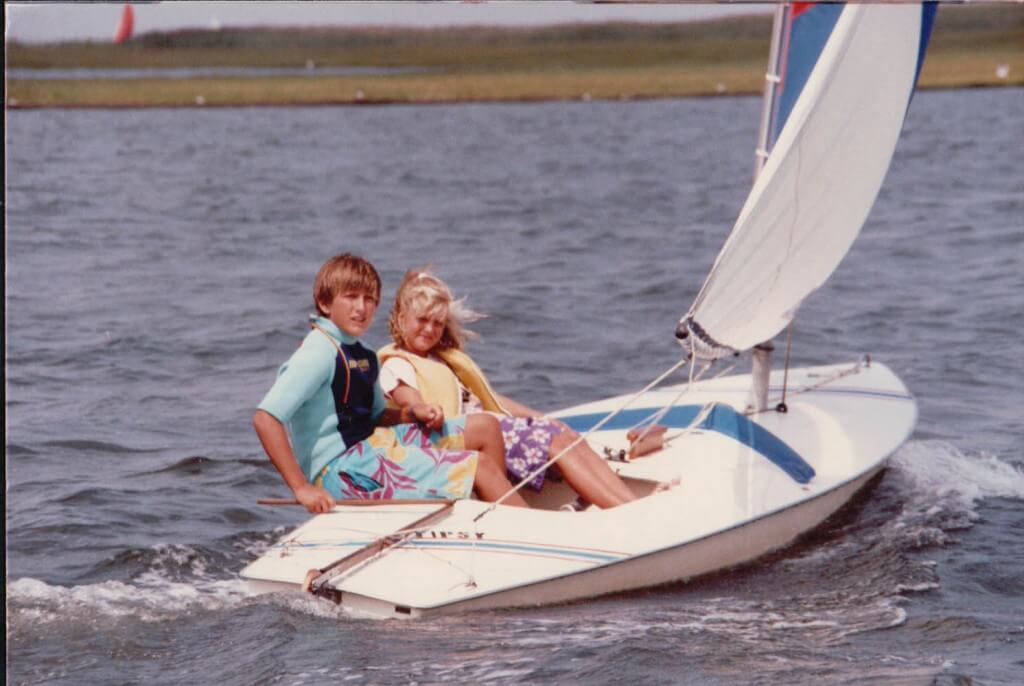 Tipsy, with Jeff and his crew, Jenny, aboard

Another major concern I had about being aboard Bear came when Marilyn and I drove to Annapolis to spend several days with Jeff and Margaret while they were anchored there. The blog lists in numerous places about their using the dinghy as transport from Bear to shore and to return. I am not as limber as my son and daughter-in-law. Nor does my joints work as well as their younger ones do. I found it to be a challenge to get on and off of the dinghy both at shore and at Bear, the primary problem being the entering of the dinghy from Bear. Jeff and Margaret would move effortlessly through the gate lifeline to descend onto the dinghy using the stanchions to make their exit and entrance. I would set my butt on the deck, move one leg over the side, and then lean back to maneuver the other leg through the gate. Then I would have visions of sliding into the water instead of the dinghy. I just told Jeffrey that I would figure out a way via practice to get on and off the dinghy without too much embarrassment. By the way if you are ever need to get onto or off a boat in Spa Creek, there is a motor taxi that is available. It requires minimal effort and only costs $3 per person. As Marilyn said the first time we used it they could be charging $20 a ride and we would have willingly paid the price.

The heavenly water taxi in Annapolis

The most serious worry of mine in taking on this adventure was being with Jeffrey for so many days. He and I have a terrific relationship and I love my son very much as most parents do of their children. I was concerned that I would do something stupid or embarrassing that would affect our relationship. (You can read about several of my bonehead moves in other entries here in the blog.) I just do not have the experience sailing or the handling of a boat through the different kind of waterways with all of its challenges that the ICW presents. Once I agreed to join Jeffrey my prayers started that my son would have the patience to deal with his Dad and that I could handle each situation. I did and he did.

Enjoying dinner and some drinks at Marker 107 in Richmond Hill, Georgia

The adventure was awesome. I am so glad that I agreed to go. I believe that Jeffrey feels the same way. Traveling down the ICW with my son was a terrific experience. I’m not saying that all went swimmingly but I am just so happy to have had the opportunity. I look forward to another chance to sail upon Bear through the ICW and would agree to do so in a New York minute.

Editor’s (Jeff’s) Note: My Dad won’t be confused with an old salt, but it was great to have him aboard. I am so grateful to have been able to spend the time with him on Bear. And Margaret and I are always thankful for everything that my Mom and Dad do for us. And thanks also go to my Dad for writing our first guest post!

This entry was posted in Guest Posts, Home Page. Bookmark the permalink.

4 Responses to A Crew’s View – Part One