Negotiating the Rock Pile on the Way to Georgetown, South Carolina

Once we had the engine running and pumping water, we re-stowed all the gear in the lazarette and raised the anchor. Slowly making our way out of the Calabash an hour or two after low tide, we felt our way towards the ICW’s R “2” marker so that we could avoid the shoal at the mouth of the river. Seeing depths quickly shallow to seven feet, I was barely making way when a large head boat came around the bend upriver and barreled towards us. As I continued to try to pick our way across the shoal, the head boat came up fast on our port quarter blasting its horn repeatedly and, just before passing us, throttling back, abruptly reducing their speed. I was grateful they had eliminated their wake, because it would have surely caused us to bounce off the bottom, but had no idea what they were thinking. They could see us for a few hundred yards before they took any action, and their signals neither indicated they wanted to pass nor consisted of the five short blasts warning of imminent danger. As our hearts raced and I continued to try to stay afloat, they eased by us to port, easily clearing the bar with their local knowledge and shallower draft.

Once we made our own way safely back into the Intracoastal Waterway, I handed the helm to my Dad while I went below to make breakfast. Enjoying some egg burritos, we eyed the Little River casino boats, which head out into the ocean twice a day, noting that they look a little less than seaworthy. Dozens of rental jet skis also passed us by, and the waterside was replete with boat rental places, bars and restaurants, and ostentatious homes. There was more than enough activity to keep us on our toes and give us something to gawk at. 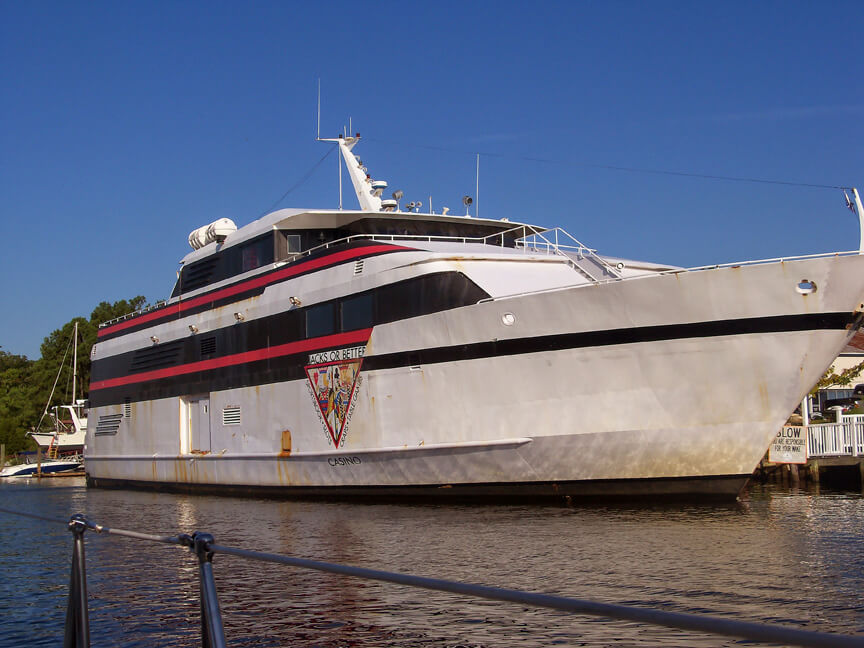 One of the Little River casino boats

After breakfast, I retook the helm as we approached the Rock Pile. This three-mile stretch of the ICW gets quite narrow at points, includes a nearly blind turn, and reportedly has rock ledges at the edges of the channel. It represented the only real problem area of the day as we made our way to Georgetown, South Carolina, and I was looking forward to getting through it.

As we approached mile 349, which effectively marks the beginning of the Rock Pile, I made a securité call on 13, listened and waited for a response, and then did the same on 16 to announce our entrance into the section and find out if there was any other traffic, especially commercial barge traffic, heading northbound (“Securité, securité, securité. This is the sailing vessel bear entering the Rock Pile southbound. Any concerned traffic please contact us on 13 or 16. Bear standing by.”). Nobody hailed us on either channel, so we proceeded onward. Over the next half hour, we carefully stayed in the center of the channel but never saw any other boats, making the Rock Pile a relative breeze. Most of the section was far wider than I had imagined given the warnings on ActiveCaptain and in the Dozier’s Waterway Guide

. However, there is one section near the end where the channel narrows, has trees overhanging and encroaching from the sides, and offers limited forward visibility. But that section only lasted for a few moments, and almost immediately afterwards we passed the Myrtle Beach airport, marking the southern end of the Rock Pile. 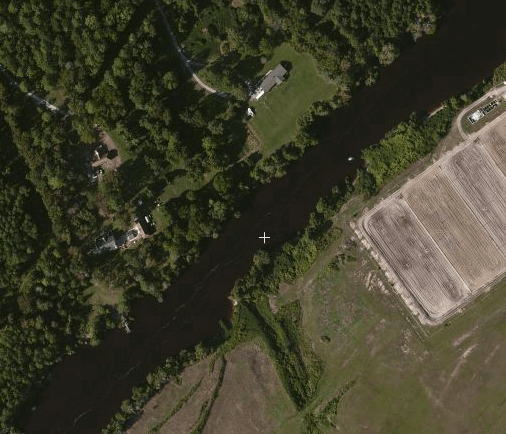 The troublesome section of the Rock Pile from Bing

The rest of the morning, we made our way through Myrtle Beach, which offered lots to look at along the shore, from countless golf courses to gaudy homes to touristy restaurants. By midday, the built up shoreline of Myrtle receded, and we entered the Waccamaw River. Claiborne Young says the Waccamaw

“has long been known as one of the loveliest sections of the entire Intracoastal Waterway.” Maybe my Dad and I are just philistines, but after about a half hour of cruising the circuitous river, we were itching for it to be over. The river was beautiful, with wetlands intruding on thick woods of cypress, cedar, oak, and pine, but the scenery was also incredibly monotonous even as I looked at the shoreline through binoculars, fruitlessly hunting for gators. The river seemed like one of those places that would be a lot better to explore by kayak or dinghy, when you could actually penetrate some of the swamps and reconnoiter the many side channels and creeks and streams that flow into the main stem, creeping up on birds and wildlife and maybe catching a glimpse of an elusive alligator. On Bear, the Waccamaw felt like it went on forever, though we did finally spy the mouth of the Sampit River, with Georgetown just beyond. Despite our engine problems to start the day, we made it to our destination with enough time to set the hook and get ashore for some much deserved adult beverages and dinner. 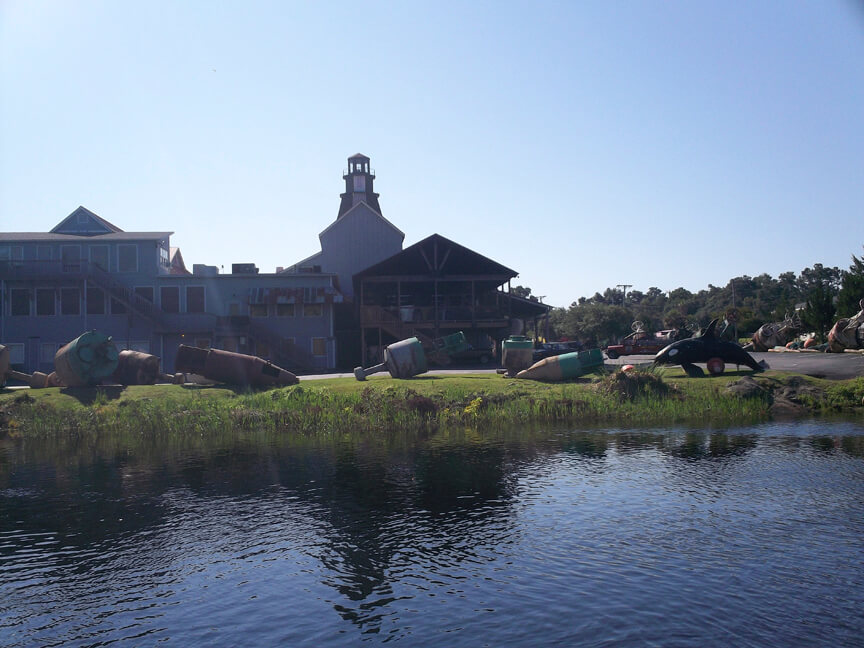 One of the Myrtle Beach restaurants along the ICW 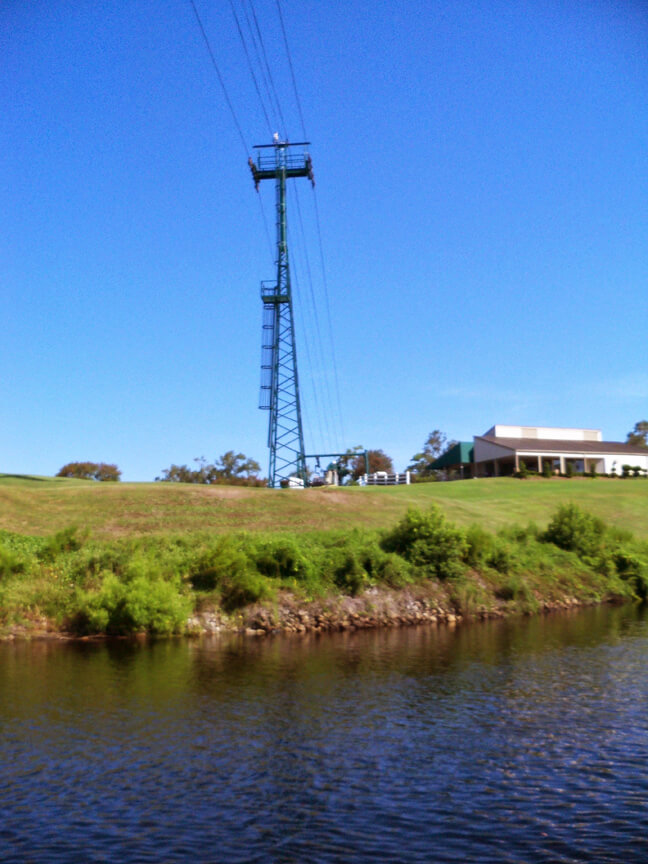 One of the golf courses, where you need to take a gondola across the ICW to reach some to the holes 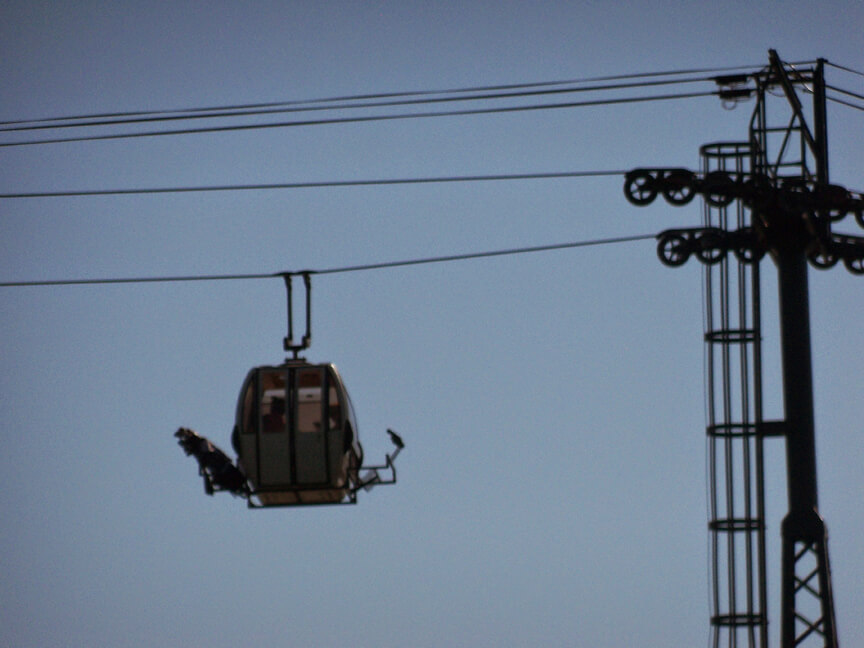 A loaded gondola, ferrying golfers and their bags across 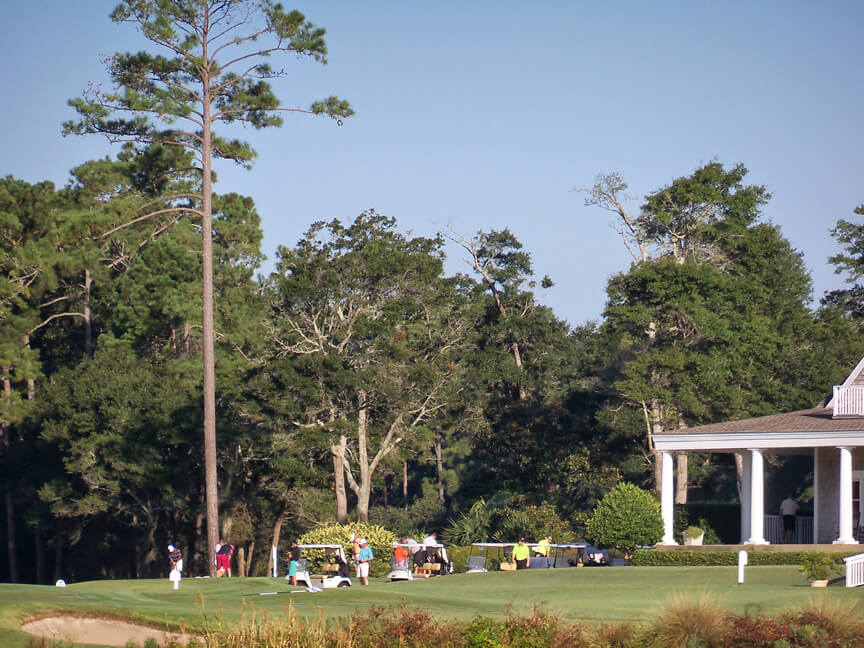 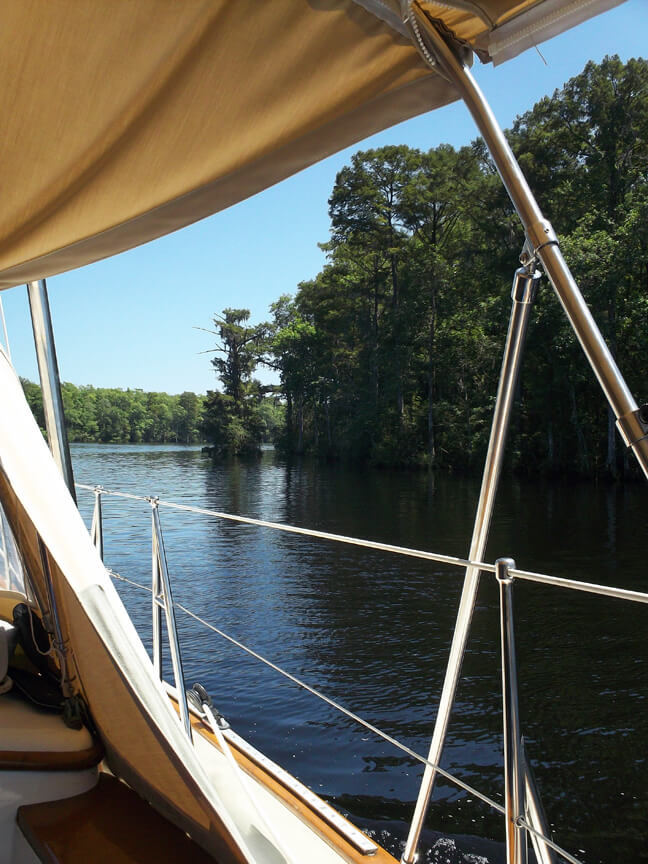 Typical scenery along the Waccamaw River 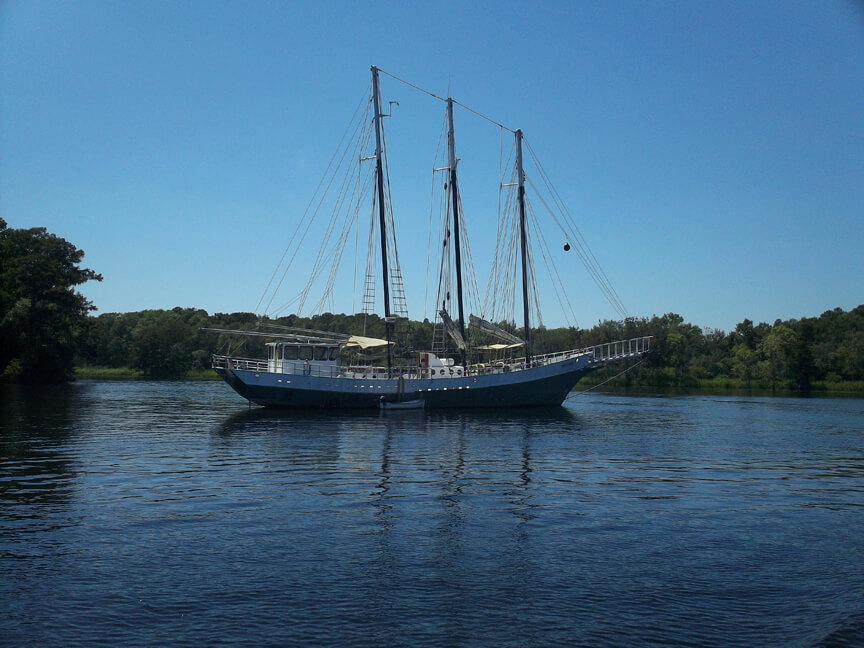 The only thing to break the monotony of the Waccamaw: a three-masted schooner anchored up

One Response to Negotiating the Rock Pile on the Way to Georgetown, South Carolina