Engine Problems in the Calabash River

The following morning, when we awoke on the Calabash River, we intended to get going early as we had a number of miles, and the dreaded Rockpile, to cover before we arrived in Georgetown, South Carolina. Moreover, we wanted to get to Georgetown early enough to enjoy a few beers and dinner ashore. We quickly got the cabin situated and figured we would eat breakfast underway. All ready to go, I turned the key on the engine, but rather than it effortlessly turning over, only a little clicking occurred. I waited a few seconds, and tried again with the same result. Finally, on the third try, the engine started with only a moment of hesitancy. The instant relief quickly disappeared, however, as we realized there was no water coming out the exhaust, meaning the engine was not being cooled. More than a little concerned, I shut down the engine and started to troubleshoot.

Getting ready to engage in some engine troubleshooting

I should begin this discussion by admitting I know very little about diesel engines. Of everything on the boat that can break – and most everything on the boat can, does, and did break – I am always most fearful that something will go wrong with the engine. All the other systems seem simple in comparison to the diesel, and, as the most expensive thing on the boat, the engine is the last that I want to screw up by fiddling around with. Up until that moment, the engine had answered my entreaties, never giving us the slightest problem and only requiring us to, so far, change the oil and filter and tighten the alternator belt. I had even started to take the engine for granted a bit, not worrying nearly as much about it having a problem as the summer wore on. But as I let my guard down, it had landed a good punch, right in my gut with these twin problems.

Because of my lack of knowledge, I began troubleshooting the engine with a great deal of trepidation. I doubted every conclusion I came to and worried that each piece I touched would be incurably broken by my ignorance. In this mindset, I tentatively decided that we had actually encountered two separate problems this morning: something with the starter that I could ignore for the time being and the pressing issue of the raw water cooling circuit. I pulled out Nigel Calder’s Marine Diesel Engines

, finding in the latter a straightforward step-by-step procedure for, surprise, troubleshooting our exact problem. 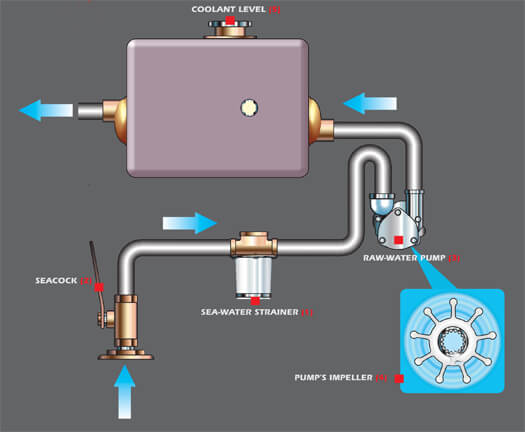 Our system, at least as far as the water pump, from Power and Motoryacht

First on the checklist was the water strainer, which is the first stop for raw water being brought into the circuit. I cleared everything out of the lazarette and climbed below, contorting myself as I went. After wrestling the board that covers the very bottom of the bilge and the raw water seacock, I closed that thru-hull. Next, I tried to open the strainer, which, as I was straining to unscrew the plastic basket that holds the strainer, I was sure I was permanently damaging. Without obviously breaking anything, I managed to loosen the basket and get at the strainer. There was a bit of debris – woodchips, seaweed, and smaller unidentifiable pieces – in the strainer, but, unfortunately, not enough stuff to have totally blocked the flow. I cleaned out the strainer, screwed it back on, and climbed out of the lazarette.

Now covered in sweat from being in the steamy, cramped lazarette, I moved on to the next step: checking the impeller. Down in the cabin, I removed the companionway box that covered the engine compartment and quickly unscrewed the cover to the impeller. As a bit of seawater poured onto the cabin sole, I looked at the impeller. Though none of the blades on the impeller were noticeably missing, I decided to pull it off and replace it, as both Calder and Compton said the impeller could have hardened or stuck to the side in time. And though a suddenly hardened impeller seemed unlikely given we had been using the engine daily, I was willing to try anything, and we just happened to have a replacement impeller on board. After quite a struggle, the impeller popped off its shaft and nearly plunged into the depths of the bilge. Playing with the blades of the impeller, it was clear they were stiffer than the supple ones on the new replacement, but I still doubted they were inflexible enough to have caused our problem. Nonetheless, I put the new impeller on, dousing it with silicon and feeling terrible about it, wondering if I was now ruining the water pump because we did not have the lithium grease that the Yanmar manual – or was it the troubleshooting book – called for. 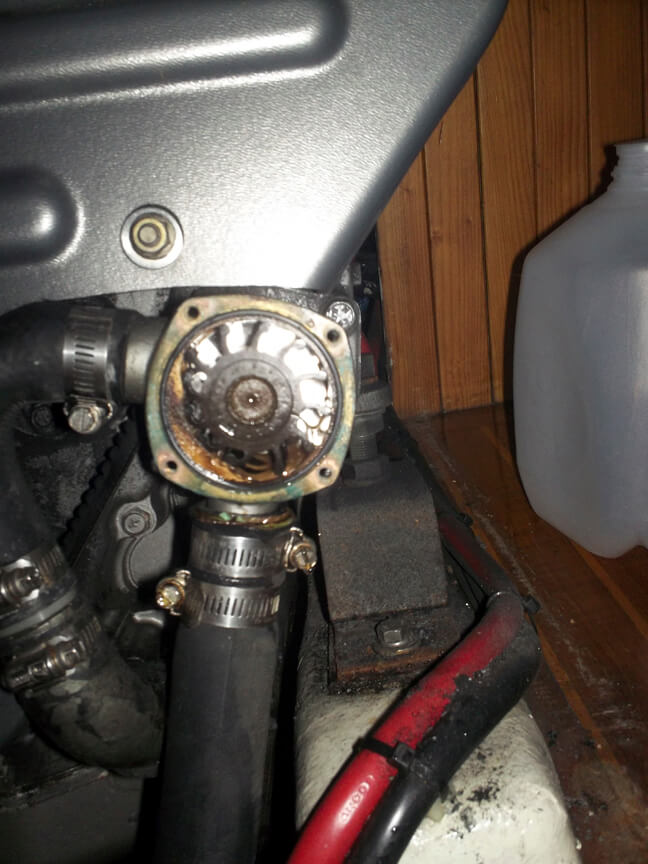 At this point, I figured we should attempt to start the engine again and see if any of this made any difference. I dove back into the lazarette and reopened the seacock before returning topsides. Then, I took a deep breath and turned the key. The engine answered immediately, roaring to life. A half second later, the reassuring sound of water rhythmically pulsing out of the exhaust joined in. My Dad was impressed with my seemingly obvious skills, but I was less so. While I was happy we could get underway, I wondered whether I had really solved the problem or whether a plastic bag or some other debris had been obstructing the intake initially, only to be swept aside by the current during the ensuing hour I fooled with the strainer and impeller. And, even though the engine had restarted without a hitch, I wondered what had caused the engine to fail to start in the first place. Despite supposedly fixing the problem, the whole experience had done nothing to build my confidence in dealing with the engine. At least until I take a marine diesel course, I think I am resigned to frustration, apprehension, and ignorance when it comes to the engine.

2 Responses to Engine Problems in the Calabash River