Georgetown is situated on what appears to be an old meander of the Sampit River, before the channel broke through to create its current, straighter course to the Waccamaw River. If this is the case, Georgetown would probably be sitting on an oxbow lake if not for dredging by the Army Corps of Engineers. Regardless of how it was formed, Georgetown’s main harbor, just off downtown, abuts a narrow channel and is sheltered by a small island. There is also a second anchorage to the west of the island, near a large mill. The downtown waterfront has been redeveloped in recent years, with a walkway along the river and two public docks for day useage and dinghies. 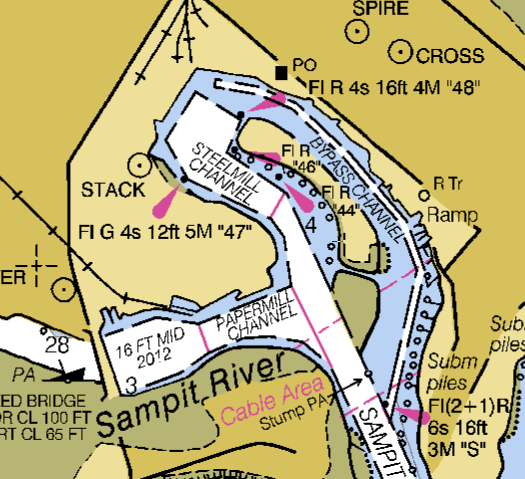 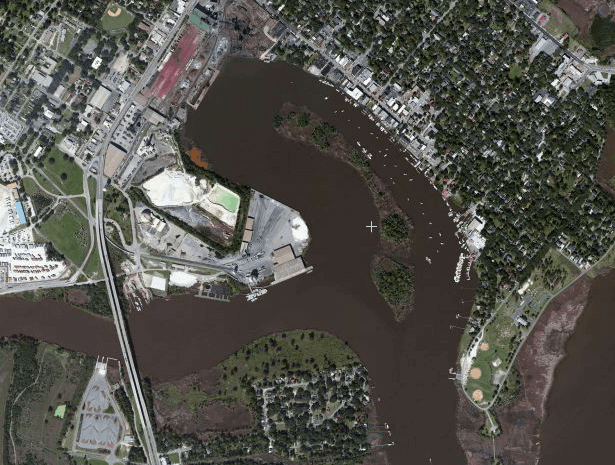 When we came into Georgetown, the main anchorage was crowded with a lot of permanently moored, derelict boats and a few transients. There were several openings between the boats already there, but none of these holes had enough swing room for us to feel comfortable letting out sufficient scope. With the wind blowing steadily from the south, we began to pull into two of them, only to reverse out and look for a slightly larger area once we realized just how tight the spot was. Finally, we dropped the hook near the westernmost public dock, in between a closed up, well cared for newer boat and a boat that looked incapable of moving under its own power with what appeared to be trash filling the cockpit. With the anchor down in this location, we were able to let out 4:1 scope, but I did not feel entirely comfortable with the tight quarters. Still, it felt good to be at rest after such a long day, and we enjoyed a cocktail while taking in a concert just across the way in the waterfront park. 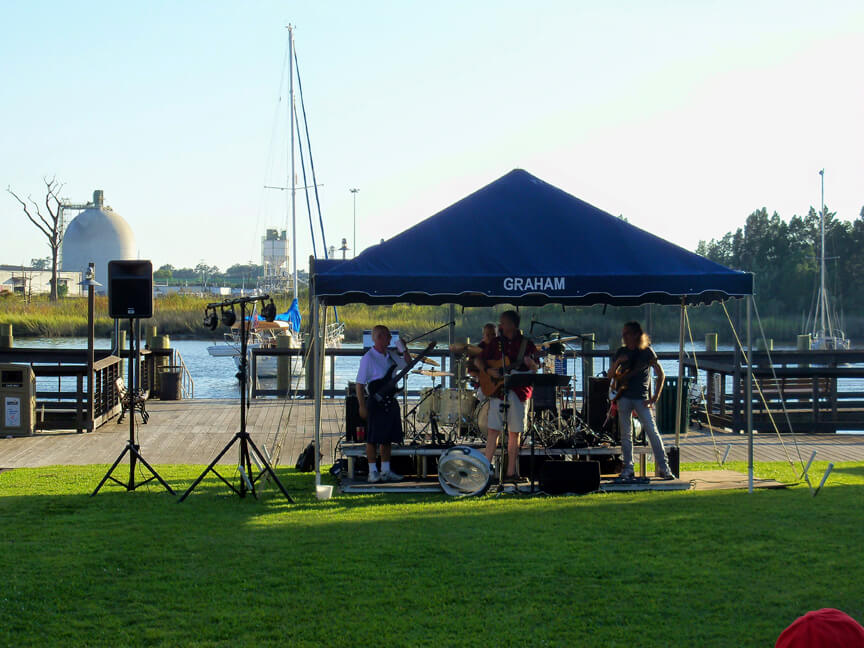 The band with Bear in the background

Once our drinks were done and we freshened up a bit, we headed to shore. With the public dock no more than a few hundred yards away, we did not bother with the outboard, choosing to row the dinghy the short distance. We found the public docks to be well maintained, and we were able to slip our modest sized trash bag in one of the many cans along the waterfront. Skirting around the edge of the crowd watching the band, we went searching for drinks, oysters, and dinner, in that order. Our first stop was the River Room, right in front of the dock. They certainly served alcohol, but when we found out they did not have raw oysters, we continued on down the street. Leaving the River Room proved to be a poor decision, not least of all because we never found fresh shucked oysters anywhere else. The place otherwise had a great menu and, after we had poked around a bit, clearly seemed like the best restaurant in town. What’s more is that nearly everyone on CruisersForum recommended the River Room, a near sure sign it was the place to be. But intent on oysters, we ended up at the Old Fish House, which had oysters on the menu. Unfortunately, these turned out to be from a jar, making them a far cry from fresh, but welcome nonetheless. The place also had some character and a few characters, but the food was, like the oysters, welcome but not wonderful. After dinner and another drink at their bar, we ambled down Front Street and ended up at Krazy Fish, another bar and restaurant with a much better beer selection than the Old Fish House but, incredibly, did not have the South Carolina – Texas A&M football game on the television. Before long, we left there too and headed back to the boat for the night. 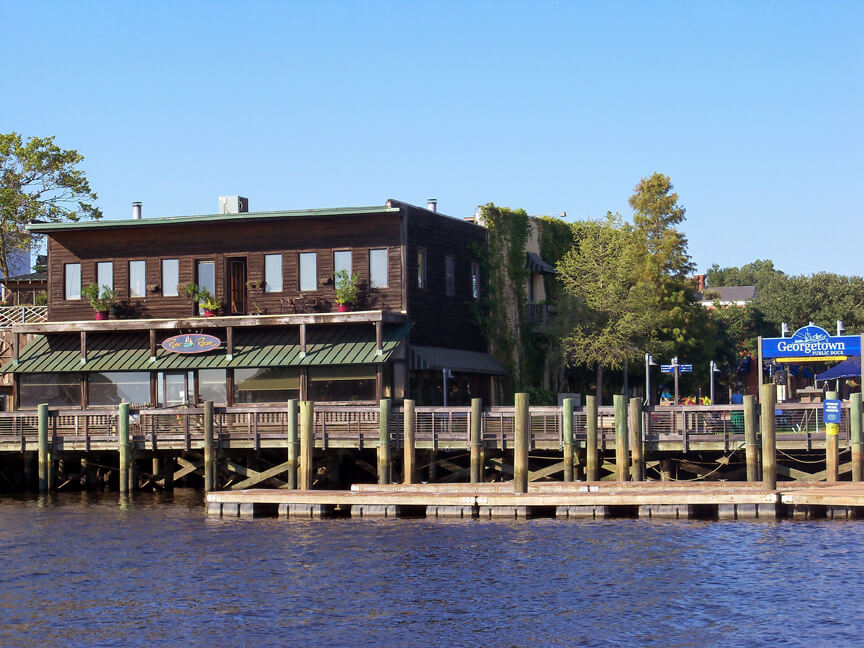 One of the town docks

Georgetown seems to have just enough restaurant, bars, shopping, and marine facilities to please a cruiser for a night or two. Moreover, the riverfront redevelopment orients the town towards the water and welcomes in boaters. But despite all these charms, the large number of derelict boats take up a lot of the anchorage, leaving only a handful of spaces, quite tight spots at that, for transients. Until we hear that Georgetown has done something to rid the harbor of derelicts, I would be reluctant to return, perhaps heading directly offshore from Charleston to the Cape Fear River. If we did find our way back to the town, we would probably anchor by the mill, trading the convenience and relative quiet of the main harbor for the space to let out enough scope and not worry about swinging into one of the derelicts or, worse yet, have one of them drag down on us. 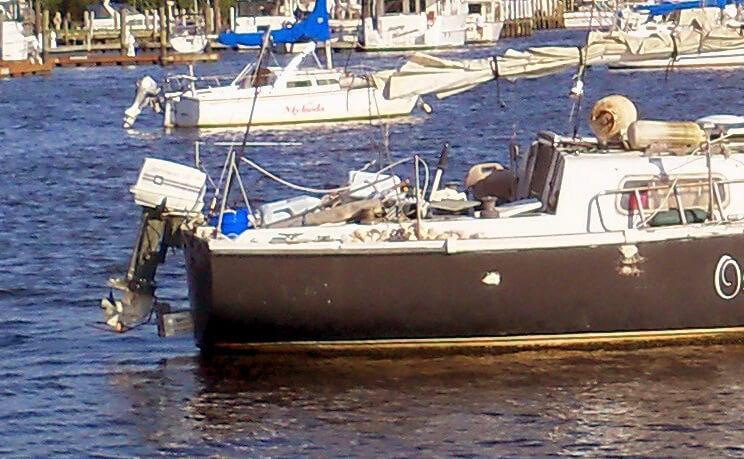 The trash in the cockpit of the boat next to us

Coming down the East Coast, towns seem to take a lot of different approaches to transients who anchor out. And while I certainly appreciate the hospitality of Georgetown in comparison to the indifference we encountered on Long Island Sound, I greatly favor what a place like Beaufort, South Carolina has done. Both Beaufort and Georgetown have clearly poured money into their waterfront. But whereas Georgetown’s derelict boats crowd out the transients and make for a downright unsightly anchorage, Beaufort installed a mooring field and instituted a policy that any vessel anchoring out for more than 72 hours must show proof of liability insurance. This rule seems to protect the city from being overrun with derelict boats and helps mitigate damage to the city docks, other boats, or the anchorage itself by unforeseen mishaps. While I recognize I am advocating for my own interests, it also seems like Beaufort’s policy also seems a fair compromise between outlawing anchoring outright as some Florida towns have done and allowing the water to be enjoyed by as many people as possible