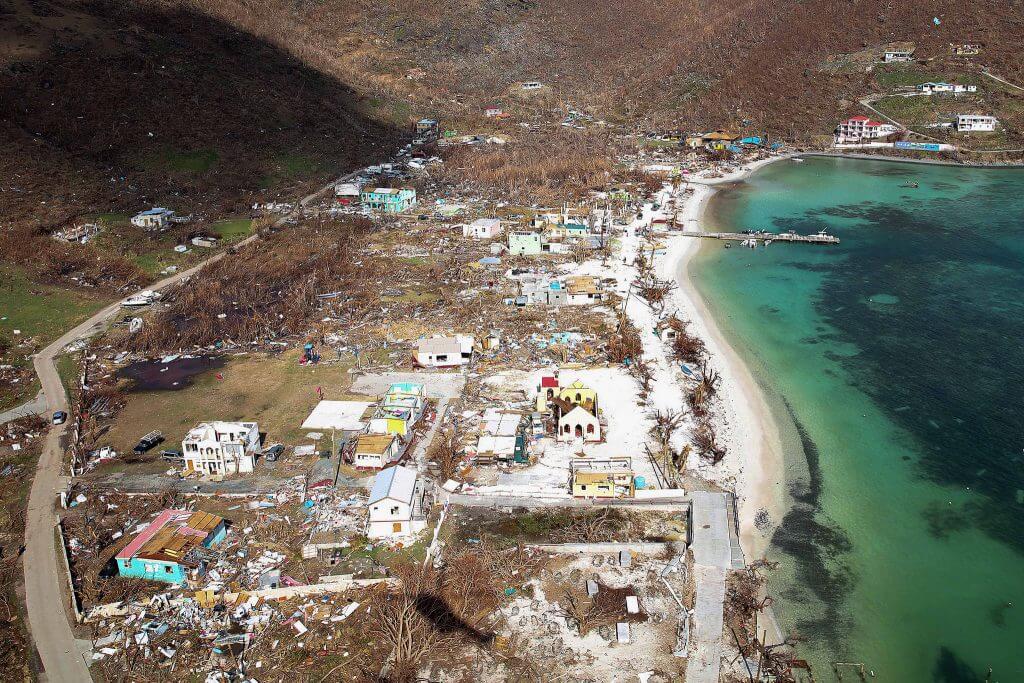 There was certainly no shortage of damage on Jost. And quite a bit of destruction is still evident. But compared to a lot of places in the BVI, Great Harbour and the rest of Jost are making large strides and some new – rather than just replacement – construction is even occurring.

In the harbor itself, moorings are in abundance. These are managed by Foxy’s and someone will be around in the morning to pick up the thirty dollar fee. There is also still a good deal of room to anchor in 20-40 feet of water outside the moorings and in pockets closer in. 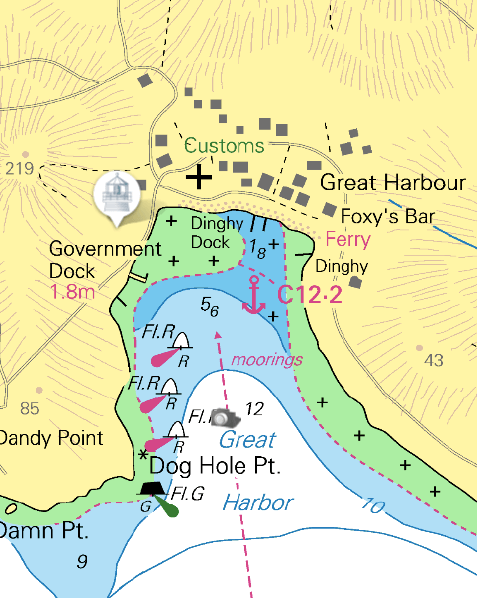 A chart of Great Harbour on Jost Van Dyke from NV Charts, which we are using as our paper charts. Buying the NV Chart Book also gives you access to the charts on their app, which we have been using a bit.

In the far western corner of the harbor, North Latitude Marina has reopened for business with diesel, gasoline, ice, water, and other necessities. Likewise, the ferry dock, just next door, has been rebuilt (or, possibly, withstood the storm). Ferries still come and go throughout the day, including a new Jost Van Dyke ferry that looks to be one of the nicest in the islands.

Right next to the ferry dock is the Sugar and Spice Shack that hardly looks like it was damaged by Irma. Of course, looks are certainly deceiving in this case. Joan is still at the helm of Sugar and Spice, though, with her grandkids helping out. And the fish roti is just as spectacular as before the storm, especially with Joan’s regular, all-day happy hour deal of three cold beers for ten bucks. Of course, Joan has breads, pastries, and numerous other delightful foods to bring back to the boat or eat on shore. She also still has a small dock out front to land dinghies at.

Unfortunately, we did not do a great job of checking into the other establishments, namely Rudy’s Inn and Superette and the community health center, on the western side of the harbor to see how they are doing in Great Harbour after Hurricane Irma. 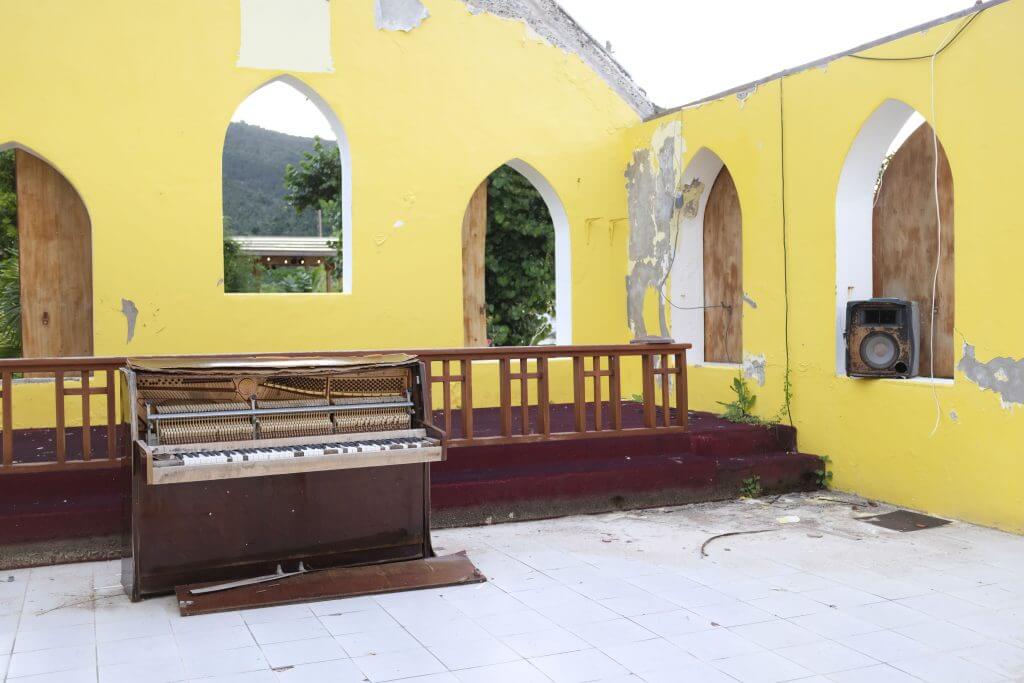 But Corsairs is still going strong, serving up food and drinks in Great Harbour post-Hurricane Irma. And the same can be said for Ali Baba’s, which, like Corsairs, is still open for breakfast, lunch, and dinner even in the early days of the 2018-19 cruising season.

Hurricane Irma hit the resident dive shop, Jost Van Dyke Scuba, quite hard. But they, too, have begun to rebuild and are open for business with hardly a roof over their heads. They still offer snorkel and scuba trips, tank refills, and a small selection of gear in Great Harbour. 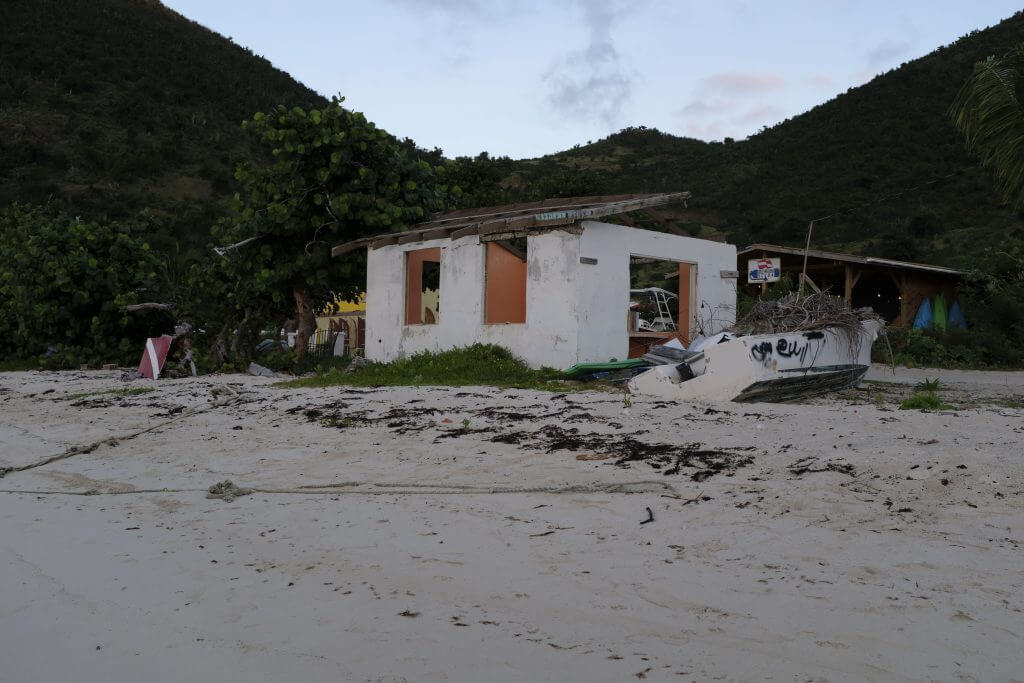 Hurricane Irma battered the area around the dive shop on Jost. But a new Jost Van Dyke Scube is rising and the place is already open.

A bit further down the beach, Customs and Immigration is in the government building, housed together with the Jost Van Dyke police, same as always. And out front is the government dock, which is a little worse for wear, but remains quite functional.

We did not see Nature’s Basket, but Christine’s Bakery is to the east of Customs and Immigration in her food truck with tables and tent out front. Just down from there, the small grocery, ice cream stand, and A&B Bar and Restaurant are also up and running. But don’t expect to find a ton of provisions there (though that was even the case before Hurricane Irma). And, unless we really missed it, Wendell’s World does not seem to exist anymore, making Great Harbour post-Hurricane Irma a little more impoverished place.

Anchoring the west corner of Great Harbour is, as you would expect, Foxy’s. All the paraphernalia on the walls, posts, and ceilings – as well as many of the walls, posts, and ceilings – were blown away in the storm. But Foxy’s is serving food and drinks. And folks are quickly replacing the lost materials with new shirts, flags, underwear, and everything else. The back, fully shaded bar and covered eating area, along with the restrooms, are still present, albeit a little banged up. And a small beach bar to the left has sprouted up in place of an older, damaged one. However, all the other bar and restaurant structures seems to have been lost in the storm. This includes what I considered to be the nicer, upscale bar on the front right, though it does appear that they are in the process of rebuilding this. Irma seemed to have largely spared the gift shop, or they just rebuilt it quickly. The shop is still stocked to the gills with Foxy’s merchandise. 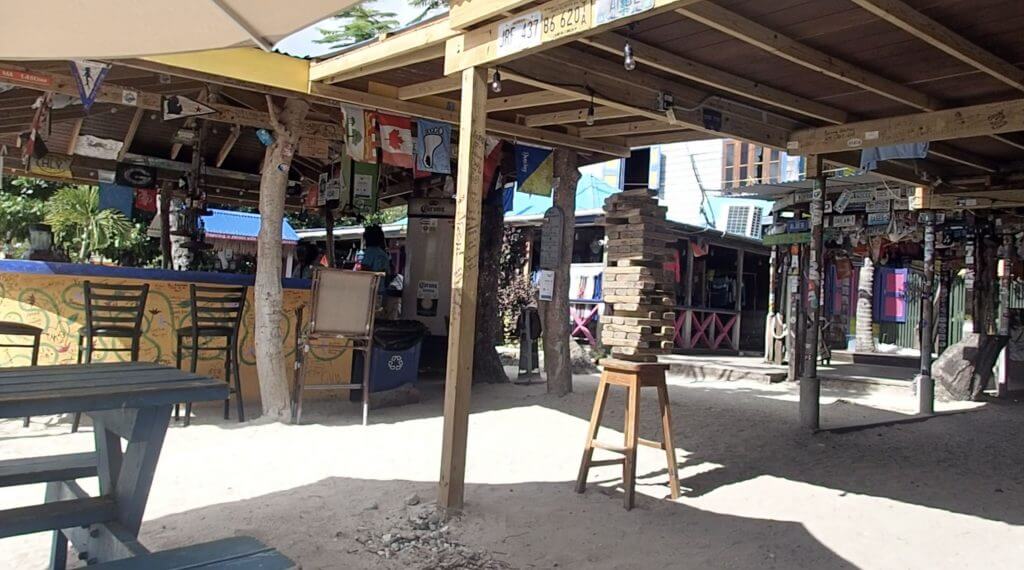 Foxy’s smaller beach bar to the left, the gift shop straight ahead, the old bar to the right, and a game of Jenga just ready for the next person to stroll by.

In the time we spent at Foxy’s, we did not see the man himself, but there were local characters in abundance as well as your regular smattering of charterers, day trippers, cruisers, and folks vacationing on Jost. After a couple drinks, you would hardly believe that the hurricane came through; in fact, it almost seemed like we had been put down in Foxy’s in about 2003. But just listening to the local’s conversation, it is apparent what a traumatic and transformative experience the hurricane was and still is.