In Trellis Bay, the wind and surge from Hurricane Irma, which was damaging enough, was exacerbated by the few dozen boats that went ashore in this supposed hurricane hole. About thirty-five yachts line the beach, mainly – though far from only – in the area of the De Loose Mongoose. These are obviously an impediment to rebuilding some properties, and the boats surely acted as additional wrecking balls in a storm full of them, wreaking havoc on the docks and buildings along Trellis. 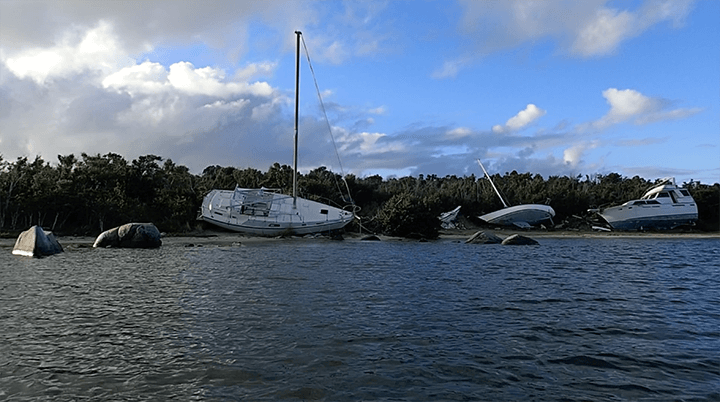 A few of the many boats that were driven ashore at Trellis Bay by Hurricane Irma and are still there in December 2018.

Bellamy Cay, where The Last Resort was located, only has one boat ashore on it, but it still looks like a bomb went off near the brick structures. More than a year on, the island seems to be reclaiming the buildings, the dock is still horribly damaged, and it looks like no plans for rebuilding are in the works. If anyone has heard from Shakti and Brian, the most recent owners, about what is going on there, if anything, we would love to hear in the comments. The Last Resort on Bellamy Cay showing damage from Hurricane Irma and no signs of rebuilding.

Along the Beef Island shore, the Trellis Bay Market is going strong with their grocery selection, bbq food, bar, and dinghy dock. They even have poured some new concrete out front since Hurricane Irma. Ice, beer and liquor, and a smattering of provisions are available.

Next door, Marché Bar and Grill is also bustling, doing a brisk business catering to tourists and all the workers who are coming and going from Trellis to Virgin Gorda every day. The sand fleas are also back there and stronger than ever. Enjoy the food, but remember to bring some bug spray.

A little bit further down the beach, Jeremy’s Kitchen was not yet open, but looks like it will be soon. Folks were doing some work, and the place seemed ready to open. We are not sure if this is still Jeremy’s or under a new name and/or ownership. Any information would be welcome 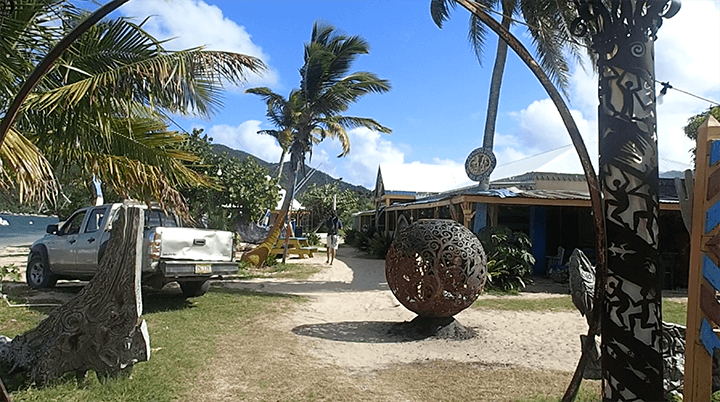 Fire ball sculpture outside Aragorn’s Studio, just waiting to be lit for the full moon party.

Just beyond Jeremy’s, Aragorn’s Studio is still intact, though certainly a little worse for wear. The community of artists also seems to be less vibrant, though there did appear to be some folks in residence. Hopefully Hurricane Irma will just be a temporary setback for what was a thriving community center. What is clear is that Aragorn’s fireballs are back lining the beach just waiting to be lit at the next full moon party. 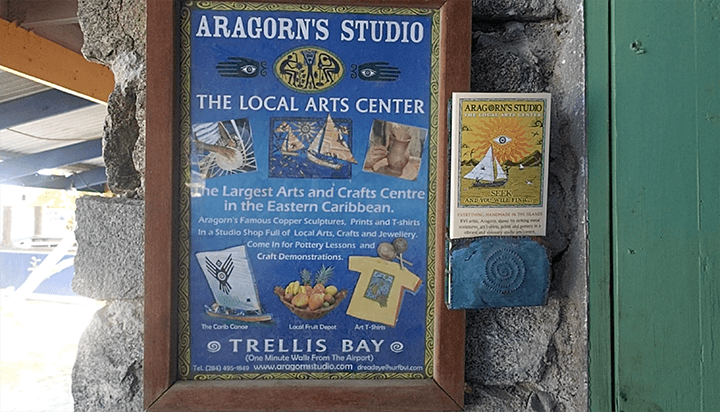 Aragorn’s Studio in Trellis Bay still seems to be going strong in December 2018.

Sadly, De Loose Mongoose does not sound like it will be back after Hurricane Irma. The place was devastated by the storm and ended up with a boat atop one of its buildings. Other vessels still line the shorefront in front of the Goose. We heard that the owners had started rebuilding, but were shut down by the government for not having permits or some such thing. With that, they gave up – or at least put aside for a while – thoughts of a post-Irma reincarnation of the famous Goose. 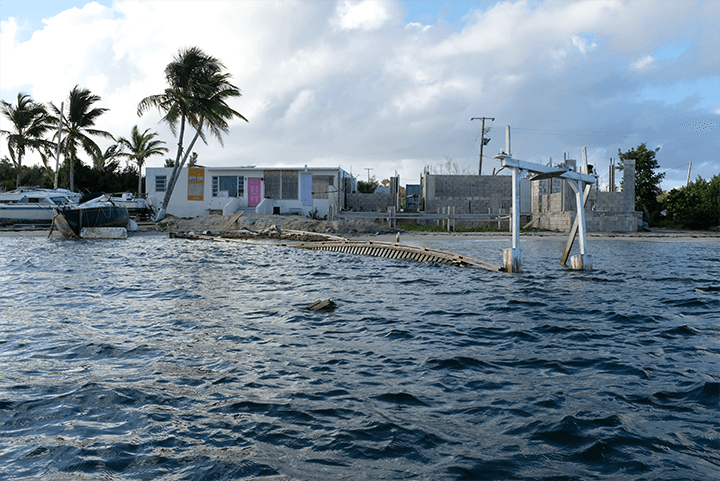 De remains of the De Loose Mongoose and their early rebuilding effort after Hurricane Irma.

The moorings in Trellis Bay are still there, but the white ones from The Last Resort have not been serviced since the storm. It also does not appear that anyone is picking up the fee for these balls. Use these at your own risk. The orange Moor Seacure moorings are, however, still being serviced and the fees are being collected by a couple who will come through the anchorage once or twice a day. Thirty dollars is the going rate, as it was before Hurricane Irma.