On the boat, unlike on land, Jeff and I arose at the same time. This was probably due to our excitement to cram as many excursions and adventures into the charter as possible. With that said, we woke up at 8 am on day four – for those of you who don’t know me, this is rare, as I rarely rise before double digits unless necessary.

It was a beautiful morning with calm, clear skies – not a hint of the previous nights storm in the air. As Jeff pumped out the dingy, I wrote about the weather disturbance of the previous evening. We ate a quick breakfast on deck and then packed up the dingy with towels, clean clothes, and Joy for a trip ashore. 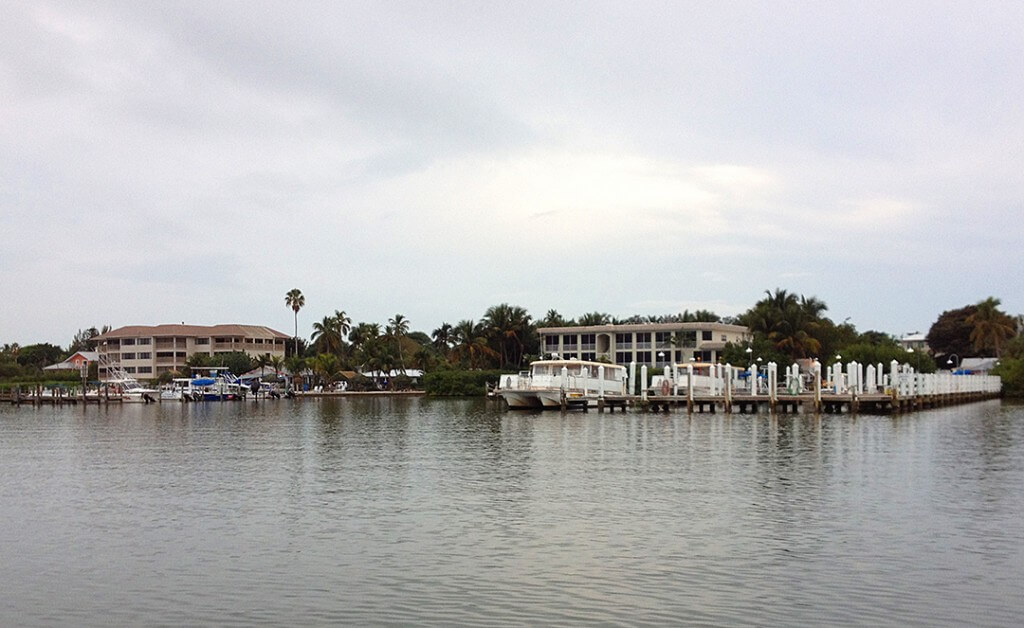 ‘Tween Waters Marina from our anchorage

We docked the dingy at ‘Tween Waters Marina. For a reasonable fee of $35 we were given free reign of the grounds, which included a pool, tennis courts, and most important, shower facilities. For an additional $15 each, we rented bikes to explore South Captiva and Sanibel Island.

Our “day pass” to Tween Waters

Our first jaunt took us to the north end of South Captiva, to the public beach, where we saw a few people shelling. We laughed a bit as we discussed the “Shell Excursions” available from ‘Tween Waters Marina at $400 for 2 hours! The grey sandy beach was wide and the water was clear, but the skies were overcast when we arrived. I imagine that in April or May this is a very busy beach, with plenty of early morning treasure hunters – of both the shell and metal detector varieties.

On our way back south from the beach we stopped at the Chapel By The Sea, which was decorated for the holidays with hundreds of threads of Christmas lights lining the drive leading up to the doors. The one room chapel was devoid of worshippers allowing us to take a peak inside at the humble yet solemn sanctuary. Two banks of blue wooden pews were divided by a center aisle leading to a small altar. The aisle was roped off about half way to the front where a table stood with a guest book and offering box. We left our names and headed down the light-strung road to the Cemetery By The Sea. In the small, fenced-in burial grounds, we found many graves of sailors and families kept tidy and decorated with shells and plastic flowers. Tiny geckos played on the grave markers and adornments, making for a strangely animated scene.

Chapel by the Sea

Back on our bikes, enjoying the bi-pedal exercise, we headed south, past ‘Tween Waters, and on to Sanibel Island. We stopped at the bridge connecting the two vacation getaways and second homes to many celebrities, and watched as a couple dozen fishermen cast their nets and lines into the inlet. The site of these working men was strange in juxtaposition to the abundant wealth surrounding them. Just past the bridge on the north end of the island we passed many colorful rental cottages and a general store. We rode for about 2-3 miles on the wide shoulders and paths, taking in the scenery. The road was surprisingly busy with traffic, which made weaving around landscaping vehicles parked outside the gated mansions a bit unnerving.

On our way back to ‘Tween Waters we stopped at the Santiva (not Sativa) Grocery and stocked up on beer, water, and postcards. Sadly, they did not sell liquor (our Pyrat bottle was running dry), so we made a plan to stop in town after lunch for this necessity.

The dock at ‘Tween Waters Marina

We dropped off our provisions at the dingy (what a change of pace to be able to leave your “vehicle and groceries” and not worry about thievery), and rode back north for lunch. We stopped to photograph a shell covered tree and the evidence of nature overtaking concrete on the way to the infamous Bubble Room.

Outside of the cotton candy pink Bubble Room there is seating in an outdoor adult wonderland. Inside the walls and ceilings are covered with memorabilia and trinkets from Hollywood. The tables are kitsch-filled shadow boxes. Our server, who donned a Boyscout uniform, was prompt, courteous, and knowledgeable. While waiting for our blended rum drink, Potato Moons, and Everything Grows sandwich, we overheard the servers discussing the typical 2-3 hour wait period for a table. We had clearly chosen the right time of year to charter in SW FL. We hadn’t waited for anything and felt like we often had the waterways and sites to ourselves.

Inside The Bubble Room

Our table at The Bubble Room

Jeff and his diver friend at The Bubble Room

Smooches in the Tunnel of Love at The Bubble Room

After a quick stop at the Bubble Room Emporium gift shop and the liquor store across the street, we headed back to return our bikes and take much-needed showers. The public facilities were nice, with large ceramic tiles in each private shower/bathroom. The hot water was endless and I enjoyed lathering up with Joy (clearly a multipurpose cleaner on a boat!) and rinsing away the layers of sunscreen and sweat. Afterwards we walked around the grounds a bit and then lounged by the pool while Jeff got a coffee. However, the weather had a different plan for us. Just shortly after settling in by the pool, a drop of rain had us quickly hightailing it for the dingy.

Back at Sojo, we hoisted the dingy on to her davits and headed north under power, to the quaint anchorage that we tried to claim on day 2. Our pleasant voyage north was interrupted by the loudest most piercing noise you can imagine. Not knowing where the noise was coming from we quickly powered down and began checking all of the systems. We inspected the engine and topped off the oil. We checked the propane tanks. We checked the battery bank. All was fine – except we were floating in the middle of the ICW, which would be similar to coasting on a major highway. To avoid the painful noise of the alarm, we put up the jib to help us more quickly drift out of the main thoroughfare, and called Mark, again. After explaining all of our efforts to silence the alarm to Mark, he was stumped. He suggested we check the bilge. The pumps were located at the foot of the companionway stairs, under a carpet, under a teak grate. When we uncovered the pump depression we could see that we were taking on water. When Jeff went to get the hand pump that he used to pump out the rainwater from the dingy I checked the bilge switch and noticed that is was off. A simple flick of the switch and the pumps were back in action, the alarm was silenced, and we were underway – feeling pretty silly for not having checked sooner.

We were relieved to find the little anchorage at Punta Blanca empty as we pulled in at dusk. A dolphin and a few large jumping fish put on an exciting show as we navigated into this little niche of paradise. Our only complaint was with the swarm of mosquitos that nipped ferociously at Jeff as he set two anchors in a Bahamian mooring to keep us snug for the night.

We dined on a simple meal of nachos and asparagus and then had a quick chart meeting before we passed out. Our goal was to take the dingy up a few of the creeks and bayous around Cayo Costa and Pelican Bay in the morning and then head South again for ice cream with a pirate! Check back soon to how best laid plans….

One Response to Florida Charter – Day 4