Chesapeake Trip – Cape May Day One

This is the fifth in a series on my 2011 trip to the Chesapeake aboard Helbent, my Catalina 22. You can find the first, second, third, and fourth posts here.

That first night in Cape May Harbor, I had a fitful night sleep as thunderstorms rolled through. Then, I was awakened at about 5:30 in the morning by the sound of reveille and drilling cadets across the water at the Coast Guard station, which is apparently the only recruit training center in the entire country. Not only do they believe in honor, devotion to duty, and respect, but also waking up at the butt crack of dawn. 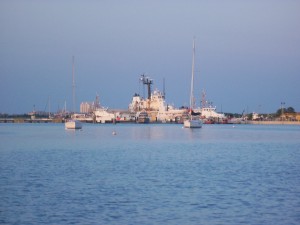 Here is one of their big ships at dock. The station is actually huge and takes up the whole northern portion of Cape May. Those sailboats in the foreground are on Corinthian YC moorings. The boats to the left of the Coast Guard ship are in the cruisers’ anchorage.

That first morning, I was unsure of how long my stay in Cape May was going to be. I was hoping Jonny would be able to join me for the trip up the Delaware, especially after the problems of the day before. He was taking care of some things in North Jersey and was not yet certain whether he would be able to come at all, but he was hoping to catch up with me in a few days. I had a few things to take care of myself, namely getting an external fuel connection fitted for the engine and setting up the port-a-potty. Finally, I had to wait for another weather window for the next leg of the journey. Since the only viable protected anchorage along the Delaware is on the Cohansey River less than halfway to the Chesapeake and Delaware Canal, boats my size (and speed) need to take full advantage of the wind and tide to make it the full 50 miles from Cape May to the canal. Moreover, with the ship traffic on the Delaware, I also wanted to avoid sailing at night if at all possible. All of this meant that I was looking for a south wind and flood tide during daylight hours. North winds were forecast for the next two days, so I figured I would be in Cape May at least that long. 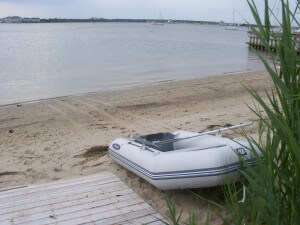 My dinghy on the beach at Corinthian YC.

I spent an hour or so enjoying the early morning on the bow, before bringing the dinghy topsides. After inflating it and rowing to shore to get the floorboards in, I poked around the Corinthian Yacht Club, checking out the facilities. It did not take too long for me to meet Harry, the club manager, who welcomed me and invited me to make myself at home. Unfortunately, the bar was not yet open, but Harry did point me to the showers, the closest Wawa, and a few of the local establishments where I could tip back a few. Corinthian is a nice little club with a robust racing program – mainly, it seems, Lasers and J/24s – and good facilities. Harry really put me at ease, and I ended up having the run of the place for the couple days I spent in the harbor on both ends of the trip.

After getting some breakfast at Wawa, I returned to the boat and started planning my day. I found a mechanic about a half hour away who could change out the internal fuel tank for a hose connection. Then I filled the port-a-potty, which I had never used before, with water only to find that it leaked like a sieve. Adding a West Marine stop to my list, I called Enterprise and scheduled a pickup for 11. I may have been the first person to load an outboard in the trunk at pickup, but the driver took it in stride, which may have been because it was his first week of a summer internship. Not having a real schedule, in a part of Jersey I have not spent a lot of time in, and just traipsing around was a ton of fun, and it did not hurt that everyone I ran into seemed to be incredibly friendly.

My first stop with the rental car was Walmart and Wawa (for lunch this time). That taken care of, I headed north to Whale Creek Marina in Strathmere, a little slice of the Jersey Shore that I had never before had the pleasure of visiting. The town consists of a couple hundred houses a mile or so north of Sea Isle City. For the most part, you drive along the only road in town with dunes on one side and a strip of houses on the other. It was a very pretty and peaceful stretch. Whale Creek Marina was about a quarter mile off this main road, nestled along – you guessed it – Whale Creek, a marshy little backwater that was part of the ICW and not more than two miles from Corson Inlet. The owner of the marina could not be a nicer guy. He was about my age, completely laid-back, and a big Phish and Dead fan. While he quickly worked on my engine, explaining everything as he went along, we also chatted about a host of other topics. When it came time to pay, he charged me just over his costs and gave me a weighted treble hook that he guaranteed would catch me some stripers if I came upon a school of baitfish in the ocean. Unfortunately, I have not yet had the pleasure of trying out his gift. If you are ever in the area, I highly recommend stopping by Whale Creek Marina for boat and kayak rentals, local fishing knowledge and tackle, and engine repair.

On the way back through Sea Isle, I looked for a bar, but did not see anything that was not completely touristy. In fact, Sea Isle struck me as an upscale Seaside rather than, as I had imagined, a more affordable and down-to-earth version of the pricey beach community of nearby Stone Harbor. Of course, I did not really poke around, so these are all my very superficial impressions. Returning to Cape May, I stopped at the West Marine for a new port-a-potty, dropped everything at the boat, and then headed back to Enterprise. On the return to Cape May, I had them drop me off at the C-View on the recommendation of Harry. The C-View turned out to be a nice little inn with a big barroom, good menu, and a combination local/tourist clientele. In short, it suited me fine. I had a big bowl of their chowder, a couple oysters, and a pint of Dogfish Head IPA. With the brewery just 25 miles away across Delaware Bay, I hoped the beer had enjoyed its ferry ride across. Returning to the boat, I sat down to a glass of rum and put the waypoints for the Delaware and upper Chesapeake into my GPS before turning in rather early. It had been an excellent first day in port and late word had come from Jonny that he hoped to join me tomorrow. 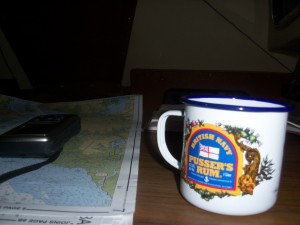