The Sinking of Bounty

I am sure many of you reading this recall the harrowing news of the sinking of Bounty, death of her captain and one crew member, and courageous rescue of the rest of her crew during Hurricane Sandy. I was interested at the time, but was far more obsessed with reading everything I could about how Long Beach Island – a place I love so much – and my friends there fared. Consequently, I read a little about Bounty, but spent most of my time obsessively perusing Facebook, Twitter, Patch, and every other information outlet for LBI news. 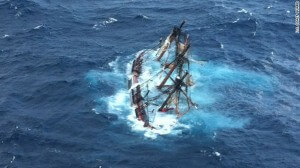 The story of Bounty largely slipped from my mind until this week when CNN published an in-depth report on the sinking of the Bounty, based on some interviews and the testimony taken at the Coast Guard and National Transportation Safety Board’s hearings back in February. I felt the CNN piece was not very even-handed, but it does provide an interesting read and overview of events. To find out more and get a few other perspectives, I combed the various sailing forums I regularly stop by (www.cruisersforum, www.sailnet.com, and www.sailinganarchy.com). There were a handful of knowledgeable and reasoned responses, a few links to other good commentary and news, and the usual deluge of uninformed, armchair sailor critiques that is always interesting, but rarely enlightening.

The most informative of the analysis I came across was that of Mario Vittone, who covered the eight days of hearings in eight separate posts for gCaptain. Vittone has more experience and knowledge about maritime emergencies than just about anyone else, having been through many of them with the US Navy and Coast Guard before becoming a writer, lecturer, and teacher on emergencies at sea. 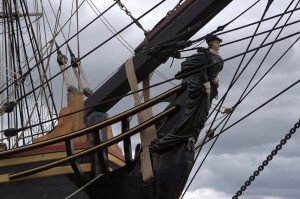 While I have my own armchair opinions on the events, I will save them for some time when we can share them over a beer. Until then, I will leave you with quite a different perspective on Bounty from Grant Howerton of Velocir (who has a good blog and youtube channel) on his experiences as crew on Bounty, where he met his wife and co-captain.