This is the sixth in a series on my 2011 trip to the Chesapeake aboard Helbent, my Catalina 22. You can find the last post here and the first in the series here.

The day began just as the one before had, with the drilling cadets waking me up super early. But this time I managed to get back to sleep until about 7:30. After another leisurely hour or two having breakfast and watching the harbor, I decided to go exploring, get a haircut, and find a coffee shop. Despite taking a different street than I had before, the young Coast Guard spouses were everywhere here too, hanging out together on their front lawns with kids running all over the place. And, just like along the waterfront, the cars lining the street had tags from across the country, including a pair of Hawaii ones, testifying to the distance some of the trainees had come from (I am a bit of a license plate fanatic, as anyone who has gone on a road trip with me knows). Making my way to the tree-lined boulevards of Washington and Lafayette streets, I found a little barber shop that cleaned me up. Leaving there, I decided to go back to Wawa and get a cup of coffee there, saving the café and ocean side of Cape May for the afternoon.

After getting the coffee, I walked over what I think is called Devil’s Reach to a little island that I had driven over a number of times the day before as I came and went. I gawked at some of the marinas and trekked through the backstreets looking at the houses, old commercial boat sheds, and other aged marine facilities. The way some of the houses were designed to evoke the decaying warehouses was pretty neat. Of course, it also made me a little sad; these new luxury homes were also the product of gentrification and late capitalism, replacing a working environment with a leisure one, displacing and obfuscating labor while pushing the working class out of this community that was built – and tied to the sea – through those same people’s hard work. 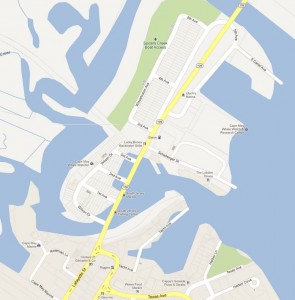 The little creek northwest of the Wawa is Devil’s Reach, I think. 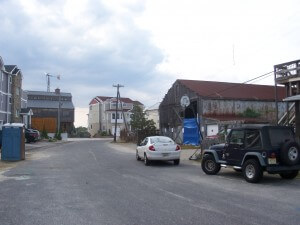 The tumble down warehouse on the right and the simulacra at the end of the street.

Back at the boat I ate some lunch and checked in with Jonny; he would be arriving in a few hours, getting dropped off by his dad, Captain Tom. I also heard from a friend of mine, Laura, who was on a cross country trip and was just leaving New York City. I convinced her to make a slight detour and hang out with us for the evening. Suddenly realizing I did not have too much more time on my own, I headed out again to explore the beachfront.

Just as I was almost to the water – I had taken a couple detours down side streets and into a bar – Jonny called to tell me they were just getting over the bridge to Cape May. Giving them awkward directions, the Captain and Jonny were finally able to locate me. Riding in the Captain’s convertible, I was reminded of something I had read in Surfer Magazine when I was a kid: it is impossible to look cool in the backseat of a convertible. I don’t know if it is true or not, but it always makes me self-conscious – ruining any chance I ever had of pulling it off – when I find myself there. We drove back to the yacht club, dropped Jon’s stuff off, and then headed out to the Lobster House for some happy hour drinks before Captain Tom headed north again. 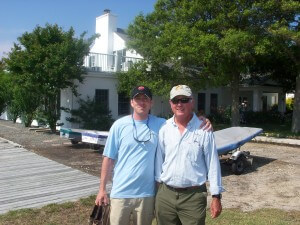 Jonny and Captain Tom at the Corinthian Yacht Club.

The Lobster House was happening, with folks waiting for tables and clamoring for drinks around the outdoor bar. We managed to get a seat on a replica fishing vessel/bar and ordered up some cocktails. Captain Tom recalled when the place actually had a real fishing boat that they had converted into a bar before it became so decrepit they replaced it. Over drinks and then dinner, Tom regaled us with more stories of other times he had been through Cape May, the boats that had taken him there, and the way the place had changed. Hearing Tom’s stories is always a real treat as he has spent his life on and along the water and has a real passion for Jersey’s coast, boats of all types, and anything to do with the water. Eventually, Tom had to get back to Long Beach Island, just about the time that Laura arrived after a hellish drive down the Parkway. 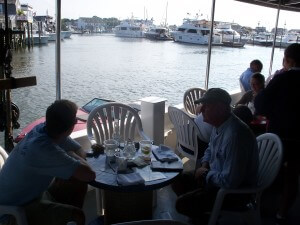 Our table at the Lobster House…not too shabby. 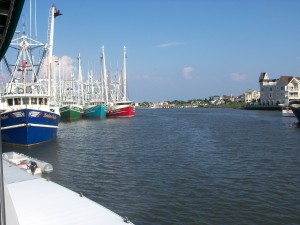 Some of the brightly painted fishing fleet, visible from the bar. 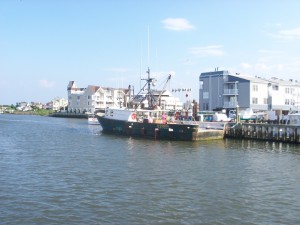 While we were there, this boat came in and the deckhands all dove off the stern. 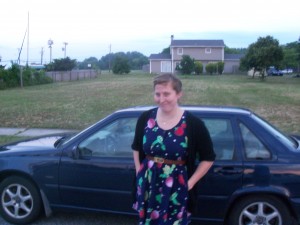 Slightly blurry picture of Laura’s arrival, but the only photographic evidence of her presence that I have.

As it was getting late, Jon, Laura, and I headed back to Helbent to continue the drinking and storytelling. We got the new provisions that Jonny brought (provided by his Mom…thanks Carol!) packed away and had a round of Pyrat Rum to welcome everyone on board. It was Laura’s first time on a boat, but she seemed to fare well despite the cramped quarters. A good time – and a lot of Schaefer – was definitely had by all. 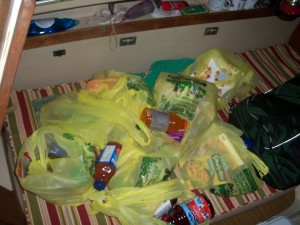 The additional provisions before we stored them away. 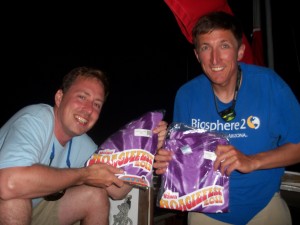 Hoagiefest t-shirts that my folks sent along so we could look classy in matching gear. Happiness is Wawa and a few drinks.