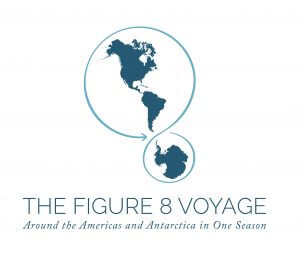 I have been thoroughly enjoying following Randall and Mo’s Figure Eight Voyage the last couple months. If you are hearing about it for the first time, Randall Reeves left aboard Moli, his 45-foot aluminum boat with a rich history of challenging voyages and firsts, from San Francisco, intent on rounding Cape Horn, circumnavigating Antartica, rounding the Horn again, sailing the length of the eastern coast of the Americas, navigating the Northwest Passage, and then returning to San Francisco in a single season, non-stop.

Things have not exactly gone according to plan. Several hundred miles off southern Chile, Randall lost his self-steering, and was forced to go in to Ushuaia to effect repairs, hand-steering through gale conditions for several days. Then he was rolled in the southern ocean, broke a window (and other items), and, in the ensuing deluge, lost nearly all his electronics. He proceeded some 3000 miles further on before stopping in Hobart.

Randall has since announced that he is headed back to San Francisco directly, where he will prepare to give it another go next year as he would be facing Cape Horn very late in the season and has already spoiled the non-stop element of his quest.

Through thick and thin, and even the loss of his sat phone, Randall – and occasionally his wife, back home in San Fran – provides splendid blog entries and occasional videos. Randall is humble, but confident and quite competent. He is also a great inspiration.