The First Week of Boat Work

It has been a week since I really started working on the boat here in Deltaville. I have crossed seven things off my list of 35 projects. That sounds fairly good, but none of those seven tasks were among the 13 jobs that I consider the more involved, time-consuming, and difficult of the lot. And I feel like I spent a good portion of the week still getting up to speed by ordering parts, getting a handle on jobs, and just getting in the swing of boat work again. 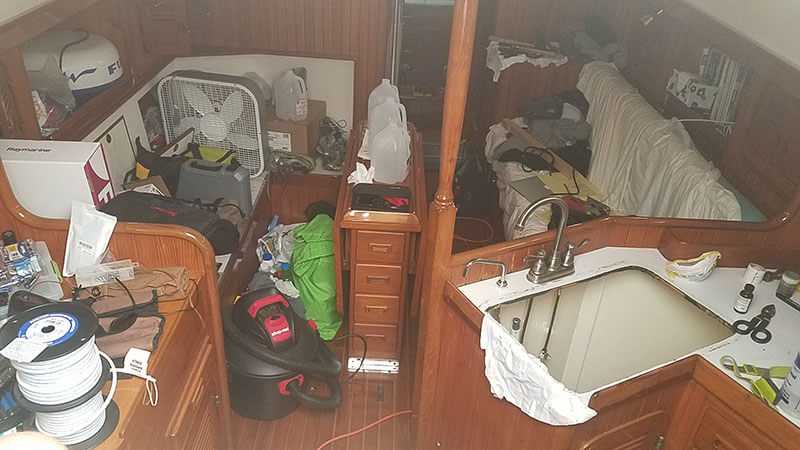 One of the things I have had to relearn is how important it is to clean up everyday or even after every job. This was the boat before I got things under control again…try finding a tool, let alone get a job done behind the, say, port settee, which is just what happened. 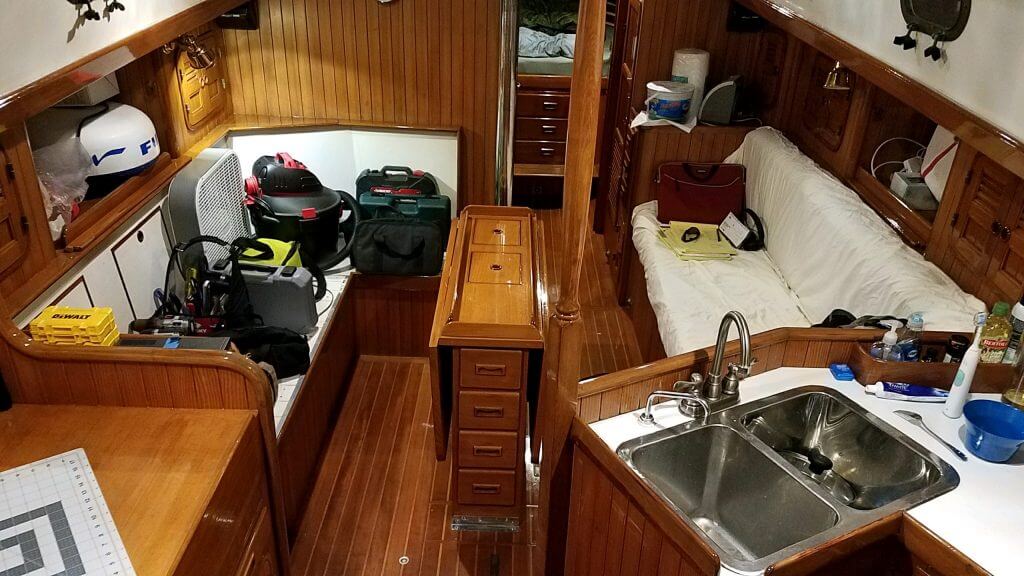 Contrast that last image with this one, from right after I finished spring cleaning in my first days aboard. Bear does not look as good as that now, but she is a good deal more organized than in the first photo.

Still, I have been making some progress, albeit slowly and fitfully.

I spent a day and a half removing the shaft log so that we could replace the cutlass bearing. It seems funny that it would take so long now, but it was a lot of effort to get it off and just as much to figure out how to do so! Fortunately, the Tayana Owner’s Group, where someone had posted some great photos back in 2013, (and Costa, which I will talk about in a moment) saved the day again. Now I am just waiting for the yard to take the old cutlass bearing out of the shaft log and put a new one in so that I can reinstall the log. 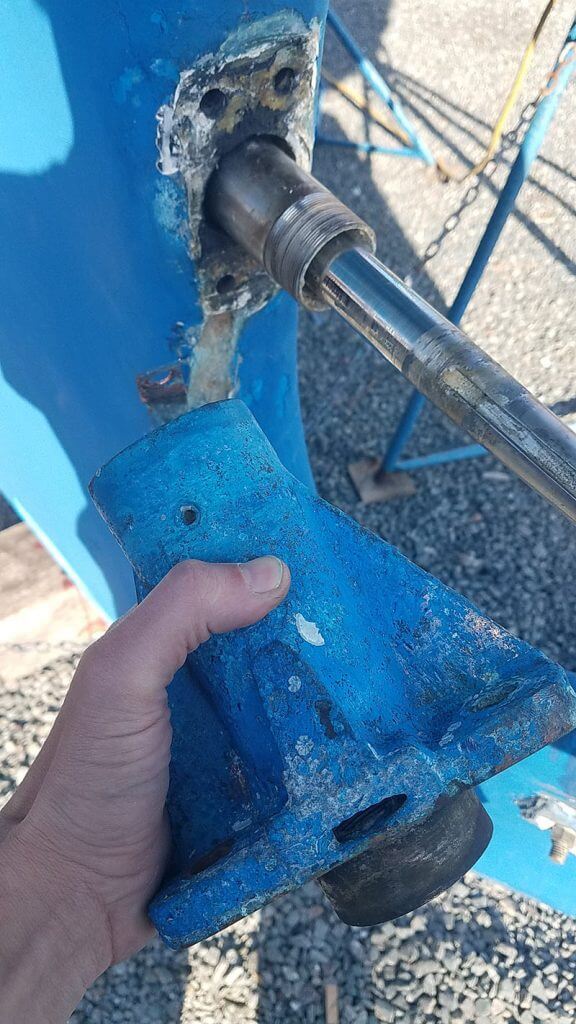 The victory photo after getting off the shaft log.

I have now spent the better part of three days – another previously inconceivable amount of time – removing two thru-hulls and seacocks and prepping to install new ones. Removal involved taking out the galley sink and cutting away the divider in the middle of one of our hanging lockers. Fortunately, Margaret and I had been talking about removing the divider to make more space in the locker; it’s now palatial in there. I also had to cut and grind away some fiberglass and wood so that I could build a bigger backing plate for both the seacocks as new ones have larger mounts. I would have installed the new thru-hulls and seacocks today, but we had quite a bit of rain all day; no reason to be mucking around outside and tracking mud all over the place when I can just wait for a sunny day. 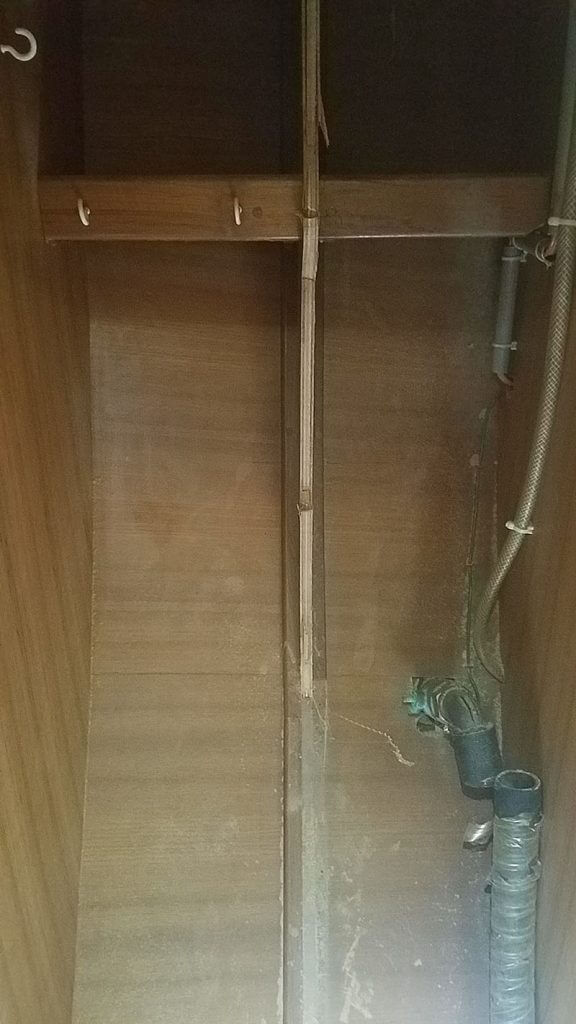 The super large and newly useful hanging locker still needs some finishing. Not only can we now store a good deal more stuff in there, but it is also one of three or four legit hide-and-go-seek hiding spots on Bear. 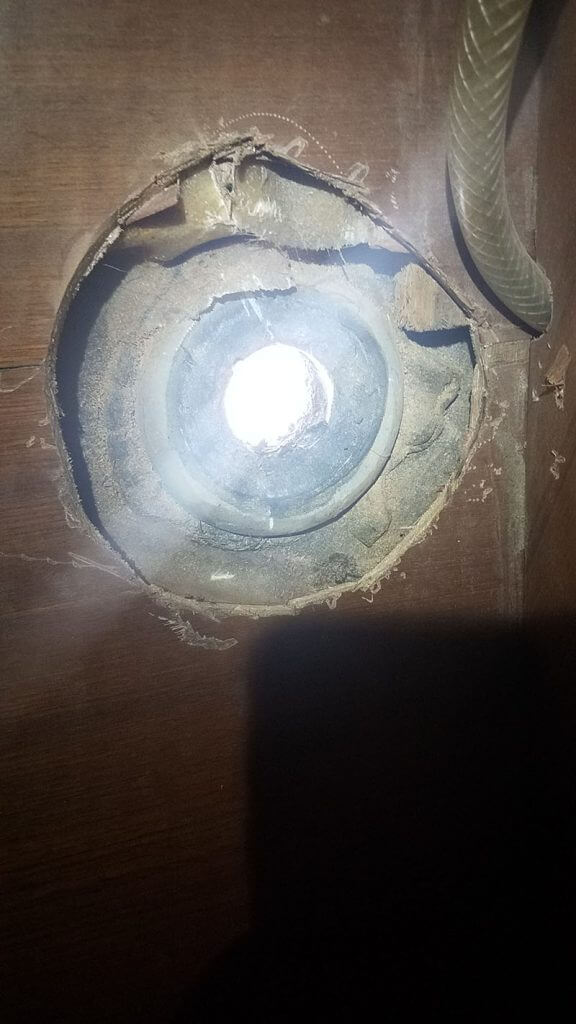 Thru-hull and seacock removed in the forward hanging locker. I already cut away some of the wood, but you can see that, at this point, I still had quite a bit more work to do before I was able to put some epoxy and filler to make a larger base. 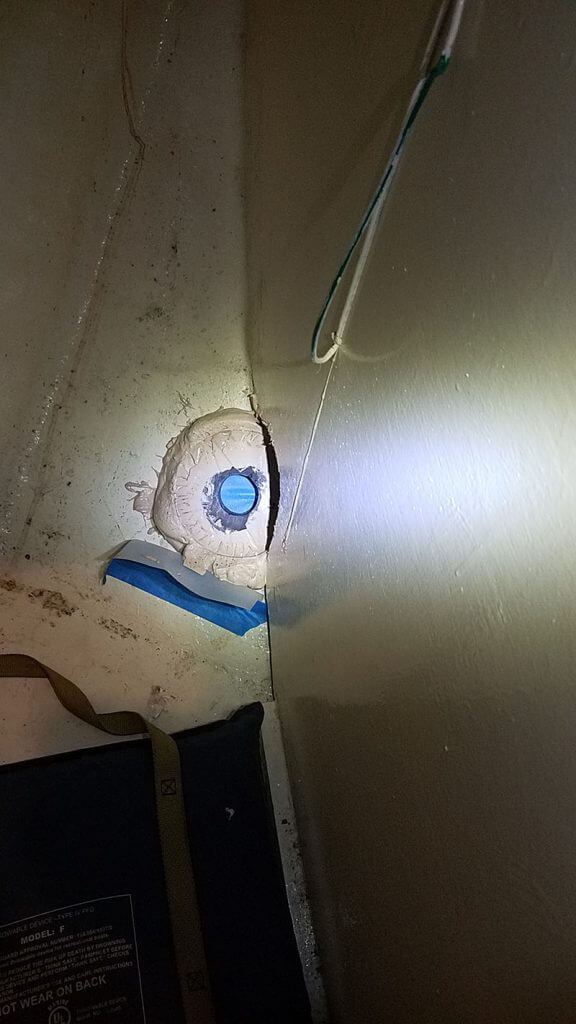 It is not exactly pretty, but with a minimum of sanding, we have a functional new base under the galley sink. You can see how the placement of the thru-hull added to the difficulty factor.

Other than working on those two bigger jobs, I have been working on a number of smaller projects in the lazarette, including installing tie-downs to secure our anchors and other gear; moving our refrigerator compressor underneath one of the shelves; scraping, sanding, and epoxying a shelf; and redoing some electrical. Things are coming along a little day by day in there, but some work still remains.

I also am in the process of installing six small (only .18 amp) fans under the head sink, in the anchor locker, and in a few other cabinets and lockers. Up in Maine last year, we had heavy condensation everywhere along the hull and, consequently, a little mold. We are hoping that some circulation helps combat the condensation and thereby reduces the mold. We will see. 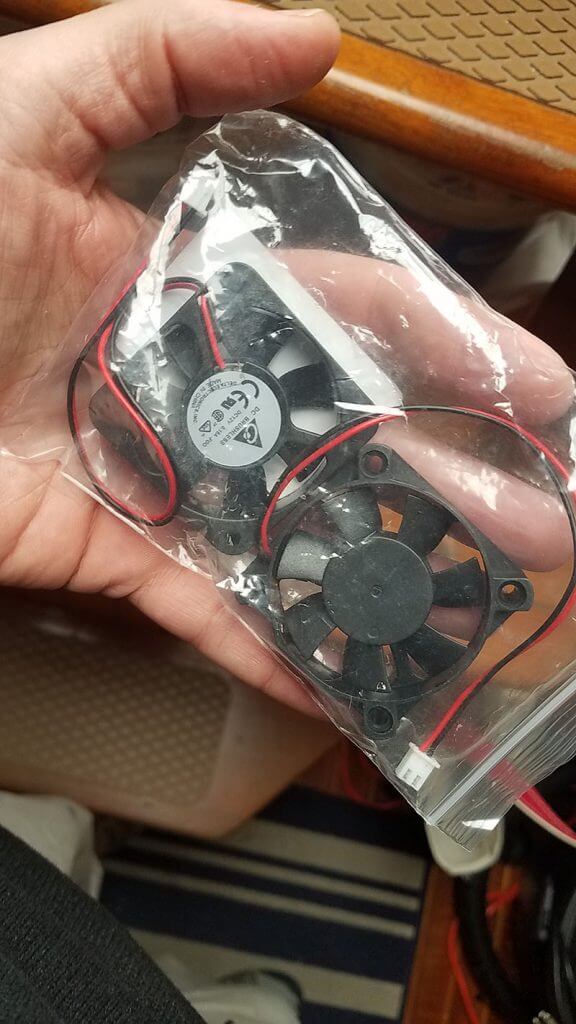 The small fans, which we picked up inexpensively on Amazon. They move a lot of air for their size. We also bought a bunch of electrical connectors and finger grills for them.

Along the way, I have met some great folks here in the yard. Francoise and Paul on the boat next to me are incredibly friendly and terribly helpful. They are finishing up three years on the hard doing a ton of work to their beautiful, unique wooden boat that they have owned for nearly twenty years. Sadly, they are getting ready to deliver their baby to new owners. I got all misty eyed the first time I was aboard, both because the boat is so lovely and because I know how much it means to them both. But they are not swallowing the hook, just moving on to a lower maintenance and more manageable Nauticat 33.

Costa, the owner of the yard, is also a wonderfully helpful and friendly person. He has some great stories and has been incredibly forthcoming with advice. For instance, without his sage counsel, removing the shaft log would have taken me at least twice as long. Costa might be holding back on me, though; he only told me about the yard’s courtesy car today.

There are other good people around, like the Canadian couple that invited me aboard for some rum and conversation the other evening. But I am trying to keep my head down so that I can make some better progress on the boat work.