Upon returning to Peoria, we both got the car unpacked, cranked the heat, and, then, logged on to Yachtworld. We charted all the Tayana 37s and a few other boats between 35-40 feet that we had initially overlooked. We also updated our old spreadsheets, noting those that were newly listed, had sold, or had a recently reduced price.

Since we had just looked at many of the Florida boats that had made our initial list, only a few from the state remained on our list. Instead, we recognized there were a cluster of yachts in the Chesapeake and a few in other places up and down the East Coast. Hence, we began thinking more seriously about going on a big eastern seaboard boat inspection road trip over our spring break. We could easily look at 20 or more boats over that time. And, hopefully, we would find the perfect boat.

However, I do not think either of us were content with waiting that long to continue our search. We had worked ourselves into a boat frenzy, and it was not easy to simply ignore for the next two months. Moreover, there was one Florida boat that really intrigued me. It was a Union 36, which was a Taiwanese built boat – meaning lots of interior teak – that was based on Bob Perry’s Hans Christian 34 design. It also had fiberglass decks, a ten-year old engine, relatively new mainsail and genoa, and 2008 standing rigging. So, it seemed to have all the most costly issues covered. But it was still listed for substantially less than many of the other boats we had already looked at. 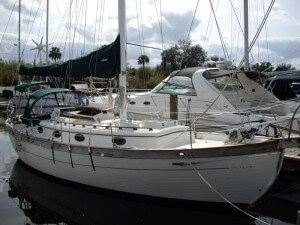 Over the next few days, Margaret and I discussed the Union, while also continuing to browse Yachtworld. Margaret had some concerns about the size of the Union, so I put the first of two phone calls into Joe, the same broker who we had met while looking at the Cabots. Joe patiently answered all my questions and tried to give me a good sense of the condition of this particular boat. We also queried the owner of a sister ship about size and storage space and spent an inordinate amount of time poring over Youtube videos of other Unions.

Eventually, I raised the possibility of putting an offer in on the boat. Typical boat purchase contracts are contingent on the buyer’s satisfactory acceptance of a survey and sea trial. So, I would fly down to Florida for the survey, and then we could always back out if we did not like the boat or there were issues with its condition. There were only two real problems with this plan. First, Margaret was still not certain the boat would be big enough for her. And, given our plan, I would be the only one who would see it in person before we purchased the boat; as those of you who have been following our blog know, since small boats do not faze me, I am not the best judge of cabin size and aesthetics. Second, we would be spending about a thousand dollars on the survey of a boat that we might be able to eliminate in just a few moments aboard.

While we were ruminating on these issues, I floated an alternative idea of putting a lowball offer in on one of the better looking boats that hovered just out of our price range. I am not quite sure where this thought came from, but I argued that we did not have anything to lose and maybe we could end up with an outstanding boat. Margaret warmed to this idea immediately. And, while I was pulling up two Cabo Ricos I thought were possibilities, she was already suggesting a Tayana 37 that had caught her eye. Still, the price of the Union nagged at me; I reasoned that if we could get a good boat for under half our budget, why were we even considering spending all of our budget. 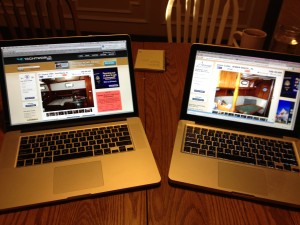 One way or another it seemed like we were getting close to making an offer. It was just not clear which boat we would be offering on. Margaret’s Tayana appeared to be the pick of the more expensive boats, but the price of the Union appealed to both of us. Within minutes, Margaret suggested I call Joe, schedule a viewing, and fly down to Florida in the two days we had left before classes started. When plane tickets proved to be surprisingly inexpensive, I called Joe, booked the flight, and went to bed so I could get some sleep before my early morning flight.