Leaving St. Petersburg and Northern Light, we had eight hours in the car to discuss the boats we had seen and our shopping plans. We clearly were still not completely sold on any of the boats we had inspected because we were still looking at Yachtworld, trying to find out if there was another boat we could step aboard between Pensacola and New Orleans. It turns out the answer to that question, in terms of bluewater boats in our price range, is no. That allowed us to focus our discussion on the boats we had seen. Over the course of the trip, and the next few days while we were at Margaret’s Dad’s place, we decided that only three were real contenders.

The first was Emily Luna, the beautiful, but deeply flawed, Cabo Rico 38. She had a decent amount of gear on board, including a new windvane, a large sail inventory, and some new electronics that helped justify keeping her in the mix. But it was really her lines, the feel of the cockpit, and the large, wood covered salon that continued to pull at our heartstrings. We decided to ask the broker a few more questions about the teak decks and the hull to deck joint.

The next boat that continued to linger as a possibility was Suwendejen, the Valiant 40 (that was berthed about 100 feet from Emily Luna). We were still unsure – or maybe unconvinced – of whether there were structural issues with the boat. Being a Valiant 40, with the great layout and space, helped keep her on our list, as did the new mainsail and recently replaced engine. The overall condition of the boat was not great, but, other than the serious structural concerns, we were thinking most things could be fixed with a lot of work and, relative to Emily Luna, little cash outlay. Trying to find out more information, we sent an email to the broker.

The final boat was Northern Light. I was very pleased with the condition of that boat, but Margaret was not completely comfortable with the interior size. And, although it would need a new engine and the teak decks removed eventually, we suspended disbelief for a while and at least entertained the idea of putting an offer in on her.

While we debated these boats, we kept discussing two issues: which of the three was the best deal and how much could we actually get each boat for. To help us better navigate the first question, I created a massive spreadsheet that included all the gear on each boat, the condition of all major systems, and a list of known issues. I then tried to put a monetary value on each component. The spreadsheet turned into a bit of a mess and did not tell us anything definitive, but I was terribly proud of it. And it did help us understand the relative merits of the three boats. 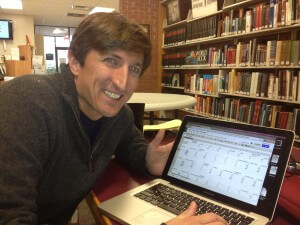 Geeking out over a spreadsheet.

The other half of our discussion involved even more outlandish speculation. With Emily Luna, we were already thinking we would need to get the boat for not much more than half the asking price to justify the amount of work – notably removing the teak decks, fixing the hull to deck joint, and replacing the sails – that she would need. We would then be left with a boat we loved, but one that still needed a good deal of other, though admittedly less expensive and more routine, work done. But we could also imagine that getting her for that price just might be possible. After all, the owner already knew the sails were shot and we thought our pictures conclusively proved that the leaks existed. Moreover, the boat had been on the market for nearly a year, all after the owner had walked away from her and his own sailing dreams and returned to Rochester, NY. We spun a similar story about the Valiant, whose owner had health issues that forced the sale. I know there was at least a dose of reality in these discussions because we could not imagine a way we would get Northern Light for half the asking price, which would make it possible for us to replace the engine and the teak decks if we did the latter work ourselves.

All this speculation continued to fuel our conversation, but by the time we were on our way home to Peoria, we had pretty much given up on purchasing any of these boats. Instead, we started hitting Yachtworld in a systematic fashion once again looking only at boats that met our new criteria. We also narrowed our geographic parameters to the East Coast, as we had come to realize purchasing a boat anywhere else would not fit with our current plans and would involve even more expense.