Working On A Schedule (like footprints in the sand)

Over the last couple days, I have been making some good progress, finishing the anchor locker, sanitation hose, and a few other projects. I am hoping to get the bottom painted and a new transducer installed by the weekend, when the rain is supposed to begin. If all goes well, we will be splashing early next week. Getting in the water then is crucial to our dreaded schedule because I need to do several jobs that can only be completed and tested in the water.

After starting the job with my Dad after we got into Rock Hall last August, I completely finished replacing the sanitation hose a few days ago. I am eager to test it out when we get the boat in the water. Elements of the job were a lot more difficult than I anticipated, mainly because it seems that a portion of the hose – from the holding tank to the deck fill – was not only original, but that parts of it were laid in before the yard finished the floor of our lazarette. Thus, the hose was more or less glassed in. I cut it out and, after much straining, managed to get all the hose in place and on to the barbs. It felt great to finally tighten the last hose clamp. While it will certainly be easier to replace the hose the next time around, I am not eager to attack that job again.

I ended up finishing rebuilding the anchor locker, changing our hawse pipe, doing maintenance on the windlass, and once again marking the anchor chain – the project I discussed in my last post – last Thursday. Changing the hawse pipe promises to make raising the anchor a lot easier. Because of where our hawse pipe was located – very near the bow, dumping into the shallowest part of the chain locker – the chain would pile and only allow us to retrieve 40-50 feet of chain at a time. That meant 2-3 trips below to manually shift the chain every time we raised the anchor. With a new, rounded length of PVC for our hawse pipe, I have been able to bring in all 200 feet of our chain without leaving the deck! Unfortunately, I did not have the same success with the part of the anchor locker project that I had been concerned was going to turn into a can of worms – performing the maintenance on the Lighthouse windlass motor. Before even starting on that job, we (Margaret consulted via telephone) decided to save it until the fall, in case removing the motor does indeed turn out to be a can of worms. 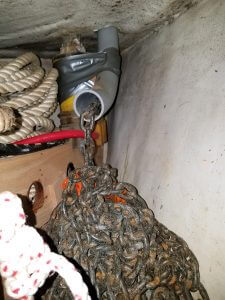 Our new hawse pipe (with duct tape installation!). You can see some of the new locker divider there in the picture as well.

There have been a couple times this spring that I have begun a project and realized that we should not only be doing the one job, but also another that is related. For instance, I initially thought that I was just rebuilding the anchor locker. But, once I got in there, I started thinking about the windlass and how we should be servicing it. While I desperately want to be making everything better, I understand that that mentality will keep us in the yard until June again. So, I have been trying to stay focused on our current work list while also making notes for our next work session. Incremental progress has never been one of my strong suits, but I am trying to remind myself that despite the fact that other work remains to be done, every time we finish a job, we get closer to completing the drawn-out “refit” that we are engaged in. 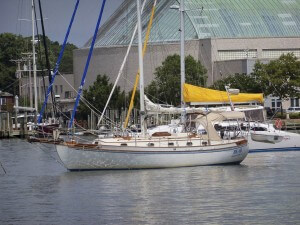 Spending more time on the Chesapeake this summer, would not be the worst outcome!

Another thing that Margaret and I have also talked about, which I see as a step in the right direction in the development of our cruising mentality, is that despite our plans to meet in Newport and cruise Maine, we will be perfectly content to cruise the Chesapeake this summer. While we are optimistic that I will be able to get the boat to Newport by May 15, there are a few projects that might trip up that schedule, but none seems more out of our hands than our v-belt problem. As I have detailed in a few different posts through the years, we have always had problems with our v-belt seemingly slipping, causing us to run through belts and have to tighten them nearly every day. The problem is caused by our after-market alternator that puts out something like 110 amps compared to the 30 or 40 that the alternator that comes with the Yanmar does; the added power apparently makes the alternator turn faster and shake more. Our v-belt problem seemed to get worse this past summer, culminating in my Dad and I shredding a belt while off Cape May (shortly before we saw the whale), causing the overheat warning to sound. That was the last straw, particularly because had it happened elsewhere – say New York Harbor or even the inlet into Cape May – we might have had a worse time of it. So, we are ensuring that the problem is remedied before we leave Rock Hall. We are going to try a Gates belt and see if that makes a difference. If it does not, we will put a serpentine belt system in, or, I should say, we will have a mechanic put the belt system in, because I still am not all that comfortable working on our engine. All of this could end up taking some time. We should have a better idea about the belt sometime next week, after I have Bear in the water and out for a spin.